chronicle.fanack.com, the Chronicle of the Middle East & North Africa, in September 2011. The website, which provides analysis and fact-based information about the region, grew rapidly in breadth and depth and today forms a rich and valuable source of information on 20 countries, from Morocco to Oman and from Iran to Yemen.

The Fanack Chronicle of the Middle East & North Africa provides comprehensive, balanced and thoroughly researched information in Arabic and English about history, politics, economic development and social issues in 20 MENA countries. The Chronicle’s Country Files follow a set structure and provide readers with everything from basic facts and figures and background on ethnic and religious groups in a specific country to Special Reports on topics such as the Iran-Iraq War, the Palestinian-Israeli conflict and nuclear programmes in the Middle East. The Specials section also features an in-depth report on the impact of Jewish settlement expansion in the West Bank, with a series of detailed interactive maps and graphs showing the location and size of the different settlements and their growth since 1967.

In addition to these reports, the Chronicle’s editorial team in The Hague works with correspondents in 20 MENA countries to cover current affairs and provide weekly analysis of news from the region. The recently launched ‘Faces’ section profiles leading regional personalities and provides insight into their role in their respective countries.

The Chronicle primarily targets young readers between the ages of 18 and 35, with the aim of providing accessible, balanced and informed analysis of political events in the region. In order to guarantee the impartiality of information on the Chronicle, articles are published anonymously, without by-lines. This also allows correspondents to write more freely about sometimes sensitive or controversial issues in their country. All articles are fact-checked before publication to ensure that content is accurate, current and unbiased. 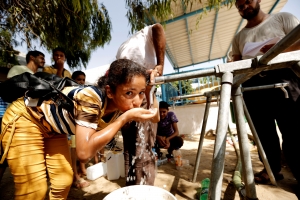 Besides the Chronicle and Water, Fanack has also launched Fanack Energy, a website dedicated to energy issues, from the effect of US shale on Saudi oil production to the Iranian nuclear programme; Islamic Finance, which outlines the principles and development of this financial system; and the Quiz, an interactive website where anyone can test their knowledge of the region.

©Fanack
In this article: Fanack