The Arab Spring brought many hopes to the Arab region, among them was the rise of youth to power, the possibility of freely electing leaders and taking them into account. In Tunisia, Libya and pre-Sisi Egypt, even if youth remained marginalized and contained in civil society and social media, free elections were organized and representatives of the people ruled. Yet the Arab Spring waves did not reach the whole region and, in some places, a reverse shock happened.

Hence Syria is organizing elections on 3 June 2014, but President Bashar al-Assad will be the usual winner. Field-Marshal Abdulfattah al Sisi is running for Egypt’s presidency on 26 and 27 May, and doubtless he will be elected as the next president. Algerians went to the polls on April 17th and, unsurprisingly, they extended their old and sick President’s mandate.

Abdelaziz Bouteflika (77 year old) was re-elected at 81.5%, while his main rival Ali Ben Flis got just about 12%. Participation was low at 51.7 %, especially in Algiers and the Berber region, where about one in four people voted.

On election morning, the President arrived at the polling station in a wheelchair, driven by an assistant, accompanied to his left by his all-powerful brother Said. He voted, showing  an uneasy smile. He did not talk, neither to his followers, nor to the polling station agents, nor to the press. It was actually his first public appearance since he suffered a stroke in April 2013.

“Boutef” is a Moujahid, one of those who fought for Algeria’s War of Independence (1954-62). He was also part of the group that toppled the country’s first president, Ahmed Ben Bella (in 1965). He was among the most famous Arab ministers of foreign affairs, and forged strong ties with Mandela, Arafat, Carlos the Jacakal and others. When he became president in 1999, the country was still plagued by terrorism, and he is credited to have ended Algeria’s civil war (1991-2002). However, he suffered a number of strokes in the last two years, and he was said to be dead many times.

The constitution was amended by President Liamine Zeroual (1994-9), limiting the number of mandates a President could exercise to two. Bouteflika changed it in 2008, cancelling that clause, and he is currently starting his fourth mandate. Five – candidates ran against him. The government was in charge of organizing this election (by comparison, Tunisia and Libya established an independent authority for their polls). Local and international observers call it unfair.

It has been two years since Bouteflika last gave a public speech. His electoral campaign managers said that they would do the job for him, and they did. Bouteflika’s campaign head was his former prime minister (PM) Abdel Malek Sellal, a school drop-out known for his thuggish language and lack of manners. His main supporters are Ahmed Gaid Salah, chief of staff of the Algerian Army; Amar Saidani and Abdelkader Ben Salah, leaders of the  Front de Libération Nationale (FLN) and Rassemblement Nationale Démocratique (RND), which  form the parliament’s majority; Ahmed Ouyahya, former PM (1995-8; 2008-12), former head of the RND (1999-2012), and currently Bouteflika’s Private Personal Secretary; Abdelaziz Belkhadem, former PM (2006-8) and former leader of the FLN (2005-13); Louisa Hanoune (long-time general secretary of the Worker’s Party, an outspoken conspiracy theorist who switched from harsh opponent to Bouteflika’s fan); and a strong network of oligarchs.

Toufik Mohamed Medien (“Algiers’ God”), the powerful head of the DRS (secret services), was against Bouteflika’s candidacy, but tempered his position later.

The Bouteflika clique controls the national TV (the most popular in Algeria) and several influential media outlets. They have also  the machines of the state at their disposal.

Algerian elections were never fair and transparent. Behind-the-table tricks are common, and the army is the usual kingmaker. Bouteflika before his strokes was able to push the soldiers a little bit aside and give more power to oligarchs and politicians, but the last word remains in the military circles (intelligence is part of the military).

Bouteflika’s illness complicated the situation. It looks like the brain behind Abdelaziz is his brother, Said, a man of nebulous foreign and business connections.

Said, however, is in trouble with Toufik. Many think that it was Said who pushed FLN’s Amar Saadani to attack the head of DRS  in the media and ask for his resignation. Saadani, however, was turned into a scapegoat: a few days after his comments, Bouteflika (or at least those speaking in his name) issued a statement condemning any sorts of attack on the army. A compromise was found.

In order to appease Toufik, Bouteflika’s clique accepted a counter-power inside the presidential palace: Ahmed Ouyahia. The latter is protected by the DRS, and he is also coveting power for himself. As Bouteflika’s Private Personal Secretary, he will control everything in the presidency, especially Said. He may be planning to create the position of vice-president, in order to take-over later.

During his three mandates, Bouteflika guaranteed the army and Algeria’s oligarchs with economic and political advantages. These two groups see his continuing position  as head of state as a continuation of the status quo. People such as Said and Ouyahia covet more personal gains, hence more power and more wealth. Others, such as Hanoune, consider Bouteflika as the safeguard against foreign conspiracies and Islamist takeover. This coalition of interests agreed on keeping the old man in power, against all odds.

Another former PM joined the election race: Ali Ben Flis (2000-3). He had the support of some youth groups as well as a number of Islamist parties, but he knew that he could not compete with Bouteflika, and he did not have the same financial assets. But  he had enough weight to make his voice heard, and he started denouncing fraud even before voting polls opened.

Ben Flis was not the only one to criticize the political establishment. A protest movement was born recently: “Barakat” (Enough!). Other opponents of Bouteflika had very harsh comments. Algerian social media are full of jokes targeting his person and entourage. Comments came from inside the system too. Hence former president Zeroual asked the older generation to pass power over to the youth in an open letter. Former PM Mouloud Hamrouch (1989-91) aired his discontent as well, accusing Bouteflika and the army to be behind the country’s problems.

This year’s election came amid bloody ethnic troubles in the centre of the country (Ghardaia), described by the regime as a western conspiracy. Another conflict, of tribal level, is growing at the border with Mali. The war in Mali, the diplomatic break with Morocco as well as the quasi- civil war in Libya and the uncertain situation in Tunisia only worsen the situation. Terrorism is an ongoing threat, and Al Qaeda and its affiliates are still using the Algerian lands as a base. Youth are angry about unemployment and corruption, like their peers in other Arab countries, and the Arab Spring is never far away.

Bouteflika ran against the will of many Algerians, on behalf of a powerful  gang. He is now the longest serving president in Algerian history. He won this round of election, yet sending his country to the unknown. 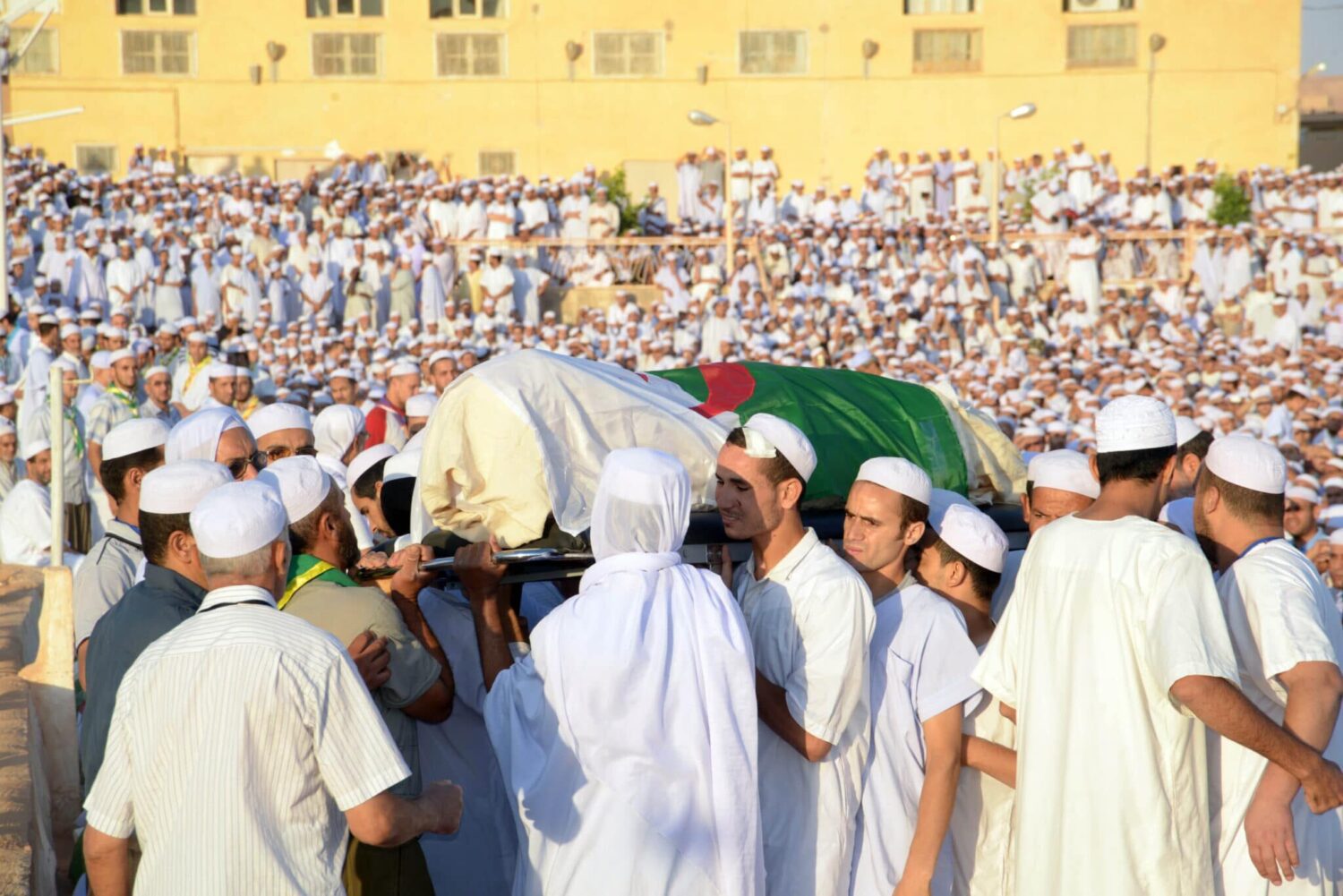 ©Hollandse Hoogte
HOCINE ZAOURAR / AFP ©AFP
FAROUK BATICHE ©AFP
"Ignorance leads to fear, fear leads to hatred, and hatred leads to violence.
This is the equation."
IBN RUSHD/AVERROES (1126 – 1198)
We are a Dutch not for profit organisation (NGO), financed solely by individuals who share our belief in the importance of publishing and disseminating reliable, unbiased information on the Middle East & North Africa region. To represent the voice of the region’s people, we carefully echo the region’s heartbeat by offering fact-checked and therefore credible information.
Your support is greatly appreciated and helpful!
Donate