Fanack Home / Algeria / Past to Present / Algeria: The Next Arab Explosion?

Algeria: The Next Arab Explosion?

Algeria was seen, for a short time, as the only stable country in the Maghrib. In 2011, revolutions were under way in Tunisia and Egypt, civil war erupted in Libya, and street movements were threatening the throne of the king of Morocco. Algeria, however, went smoothly through these upheavals and seemed strong, prevailing among its peers and in no need of structural reforms.

Three years later, Tunisia has passed the critical period of transition. Egypt has been frozen in time under an autocratic regime and is calmer, for the moment. Morocco succeeded in calming down its street. Libya, on the other hand, is almost a failed state, and neither is Algeria faring well.

The country’s political and economic situations can be described as the calm preceding the storm.

President Abdelaziz Bouteflika was elected for a fourth term in April 2014. Having suffered several strokes, he is scarcely able to work, and this has strengthened several puppet masters around him, controlled by his brother Said. It has intensified an existing power struggle behind the scenes.

A tacit conflict will confront those aiming to succeed Bouteflika, if he is impeached, and it will come mainly from his immediate circle. One of the possible successors, Abdelaziz Belkhadem, former prime minister and a close aide of Bouteflika, was fired in August during this battle. Another aide, Ammar Saidani, the head of the FLN (Front de Libération Nationale, Algeria’s most important political party) , is perhaps about to be toppled as well. Ahmed Ouyahia, the director of the president’s office, now seems to have the upper hand in this race – but for how long?
The FLN itself is struggling against those who opposed Bouteflika’s candidacy earlier this year, especially General Toufik M. Medien, the head of the Département du Renseignement et de la Sécurité (DRS, the Department of Intelligence and Security, or military intelligence) , and the Coordination Nationale pour les Libertés et la Transition Démocratique, a coalition of political parties, civil-society activists and renowned politicians, including Bouteflika’s former prime minister, Ali Benflis.

Toufik has a network of soldiers and intelligence officers, and the Coordination is backed by politicians and businessmen. Yet Medien’s power is gradually being curbed by Bouteflika’s circle, and the Coordination is isolated and weak. The crisis inside the regime reached its climax with the ‘police rebellion’ of October 2014. Security forces from the rebellious region of Ghardaia demonstrated, calling for higher wages and asking for the right to create a union, but experts on Algeria related the events to the struggle between Algeria’s power brokers. This is uncommon for Algeria, and the police rebellion was followed by a wave of police protests in other cities. The largest and most significant took place in Algiers, the capital, and ended in front of the presidential palace.

The country’s economy, while still doing well, is at risk. The Algerian population was kept peaceful through state subsidies and the redistribution of wealth, a policy made possible by state income from gas and oil, but oil prices are now falling because of a combination of factors, and Algeria, which relies mainly on its hydrocarbon resources, faces an uncertain future, if this development continues . Moreover, due to the high rate of consumption, the country’s reserves are falling short, putting the country’s economy at risk of total collapse.

Unemployment, which runs about 30 per cent, is expected to rise. Algerian universities produce about 300,000 graduates per year, but there are no jobs available for them. This is a time bomb, as numbers are increasing annually: unemployed graduates, are, as in other North African countries, the fuel of revolution. They are also the target of jihadi Salafi recruitment.

Jihadists continue to advance in various parts of the country, conducting an insurgency that is now a quarter century old. Several attacks have targeted Algeria’s armed and security forces over the year, leading to the deaths of soldiers and policemen. Other assaults have been foiled, and dozens of extremists are arrested every month. A Frenchman was abducted and beheaded in September; Jund al-Khilafa, a group affiliated with the Islamic State in Iraq and Syria (ISIS), claimed responsibility.

Ghardaia, an oasis in Algeria’s central region, has been shaken by ethnic and social troubles for more than a year. Another oasis, Touggourt, dozens of kilometres east of Ghardaia, has begun to witness street movements recently, with clashes between the population and the police. In both regions, there have been deaths and injuries, which keeps the situation fragile and subject to escalation. It is possible that other regions will revolt as well.

Libya, Algeria’s large neighbour to the east, is torn by various conflicts, including, amongst others, battles over resources, mini–civil wars, and proxy wars. It is also a hot spot of jihadi Salafism. Algeria has tried, unsuccessfully, to stage a national dialogue among the various Libyan stakeholders.

Tunisia, Algeria’s other eastern neighbour, while peaceful and quiet, has a jihadist insurgency on its border with Algeria. Mali, on its south-western border, did not calm down after the coup of March 2012, and it is the region’s other jihadi Salafi stronghold. These issues have propelled a massive deployment of the Algerian army on the borders.

Algeria is imbroiled in a decades-old conflict with its western neighbour, Morocco. It is a rather ‘cold’ war, with ups and downs. After a period of calm, Morocco in August 2014 took a sudden decision to send troops to the Algerian border and deploy missile-launchers, a move that remains unexplained. In October, the Algerian army fired at Moroccan citizens, perhaps smugglers. The belligerent discourse recommenced, politically and in the media.

Algeria’s military budget is the highest in Africa ($10.4 billion) and is expected to rise for the reasons mentioned above. Such a large army requires a strong economy and a united population, both of which are weaknesses of present-day Algeria: the dissatisfaction amongst the security forces can affect the army rank and file.

The political situation in Algeria is sclerotic and averse to any change, and there is no space for reform or serious opposition. Discontent is obvious among the masses but also in the regime’s backbone (army, police and bureaucratic politicians). Bouteflika’s regime resembles, in this regard, Ben Ali’s Tunisia and Mubarak’s Egypt in 2010, the year the Arab Spring began. 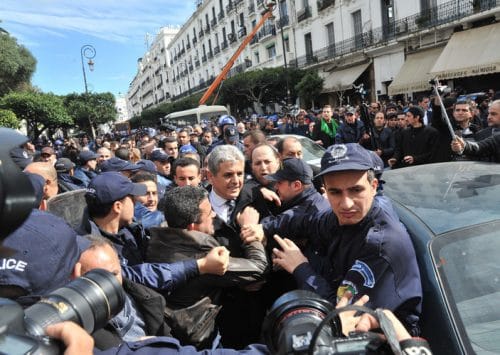 Is a New Spring coming to Algeria?
The Algerian society seems to be on the verge of explosion. Postages denouncing the new austerity measures can be seen e...