It was hardly a surprise when Algeria’s National Liberation Front (FLN) won the biggest share of seats in the May legislative elections. After all, FLN’s electoral hegemony  goes back to Algeria’s independence in 1962. FLN won 164 out of 462 seats in the parliament. With another 97 seats won by an ally, the National Democratic Rally (RND), the two parties have majority control.

But the victory was overshadowed by the fact that 38,5 percent of Algerian voters sat out the elections. The low turnout – down from 43 percent in 2012 – reflects a widespread pessimism that Algeria’s dominant parties offer any real hopes for progress and reform.

The election drew swift denouncement from other political coalitions for alleged rigging. Abderrazak Makri, leader of the Islamic Movement of the Society for Peace, contended that without fraud, his party would have secured 120 seats instead of 33. Other lesser political parties, including the Socialist Forces Front, also levelled accusations of fraud.

The fraud complaints, however, couldn’t hide the fact that support for Islamists has fallen in the polls since the civil war that shook Algeria in the 1990s. Makri’s party formed a coalition with the Front de la Change, but the Islamists’ efforts to leverage the economic and social unease from the drop in oil revenues for more votes were met with defeat.

The disillusionment among Algeria’s electorate is particularly acute among those under 30 who make up most of Algeria’s population. The Algerian youth have little faith in politics, and feel alienated from the rhetoric of aging leaders who draw their legitimacy from their ties to the 1954-1962 colonial war.

The May ballots came at a time of mounting anger in Algeria. Its economy is heavily dependent on income from oil sales still mostly under government control. The steep drop in oil prices forced dramatic cuts in public spending. The country’s leaders are grappling with how to balance the economic threat against subsidies for food, fuel and housing that remain part of a vast oil-financed welfare state.

What’s more, one of every three young Algerian is jobless. Unlike neighboring Morocco and Tunisia, Algeria has not yet capitalized on its tourism industry. Algeria boasts beautiful coastal resorts and the Adrar Desert, part of the Sahara. But the government and the private sector have yet to tap tourism investors to shore up the economy.

Perhaps reflecting the discontent, FLN this year lost ground from the 220 seats it won in the 2012 elections. Political scientist Rachid Grim attributed that to ”the scandals that shook this party.”  Algerian President Abdelaziz Bouteflika has been mostly absent from the public since his 2013 stroke, and his family members have been implicated in corruption.

Political parties, including the FLN, are jockeying for influence with the 80-year-old Bouteflika. No clear successor has emerged for president, which Algerians regard as the true seat of power.

Although the Islamists regressed in the polls, they continue to use social ills in their bid to take power in the future. But this potentiality is likely to be hampered by the governing coalition, which could even isolate the Islamists in the 2019 presidential elections.

Bouteflika’s fourth term ends in 2019. It seems likely that Algeria’s political future will remain in a flux until – or perhaps beyond – then. As if to underscore that point, FLN chief Djmel Ould Abbes last October 2016 floated the spectre that Bouteflika may even run for another term “if he wishes.” 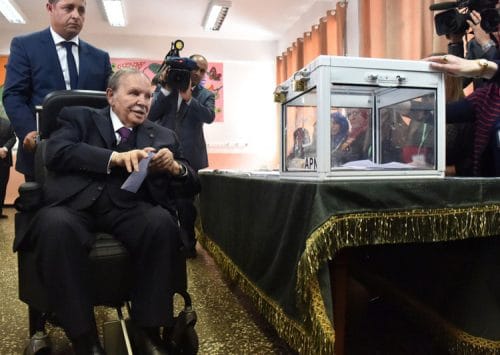 Algeria’s Ruling FLN Calls on Bouteflika to Run for a Fifth Term
Hundreds of FLN supporters were brought to the area by bus, waving pictures of Bouteflika and the Algerian flag at what ...