Abdelaziz Bouteflika, Algeria’s longtime president, amended the constitution in 2008 to lengthen the presidential term from two to life-long. But anyone who follows Algerian politics knows that, since coming to power in 1999, Bouteflika has never had any intention of leaving.

After a stroke in 2013 put him in a wheelchair, many expected him to step down at the end of his third term the following year. Nonetheless, the regime’s inner circles insisted on keeping him on as a consensus figure who can serve the interests of decision-makers, and they pushed him into a fourth term. Few expected him to be able to complete even the first year of the term because of his deteriorating health, but this term has also come to a close, and Bouteflika wanted to nominate himself for a fifth.

The people’s patience appears to have run out, however, with protests erupting across the country ahead of the election originally planned for 18 April 2019.

Heightened tensions at the end of 2018 within the ruling parties led to major changes in the military leadership. The most prominent of these was Major General Abdul Gani Hamel, the head of national security, followed by Manad Nuba, commander of the Algerian National Gendarmerie, four commanders of military districts, the director of army security and the finance director at the National Defence Ministry.

These changes paved the way for the regime to present its 2019 presidential candidate. There was widespread speculation about the candidate’s identity, and whether it would even be possible for Bouteflika to run for a fifth term in the face of the opposition from national figures, popular circles and even some parties within the regime itself.

Nevertheless, Bouteflika announced his candidacy on 10 February in a letter to the people circulated by Algerie Presse Service, the official media outlet for the Algerian authorities and presidency. Most importantly, the letter said that if Bouteflika is reelected, he will call on all political, economic and social forces to hold a comprehensive national forum aimed at reaching consensus on reform and profound transformations that Algeria should make in order to build its future. The forum would also discuss ways to enable citizens to live together in peace and prosperity.

Bouteflika also explicitly addressed Algerian youth, one in four of whom are unemployed, according to Reuters. He noted that enhancing citizens’ confidence in their institutions requires answers that are more tailored to the aspirations of young people, who often distance themselves from participation in political life. Many young Algerians have chosen illegal – and frequently fatal – migration, often to Europe, to fulfill their aspirations and ambitions. In a clear attempt to win over young voters, Bouteflika promised to address this issue by ensuring a stronger representation of young people in executive authorities and elected councils.

Bouteflika’s attempt to be reelected was widely viewed as inevitable, not least because he heads the ruling party and presidential alliance that controls the General Union of Algerian Workers and influential financial and media actors. He is also backed by the army and the business elite who need him to continue serving their interests.

Protests broke out in cities such as Bejaia, Khanchila, Annaba and Oran following Bouteflika’s announcement. The protesters denounced his candidacy and demanded that the current regime step down.

Prime Minister Ahmed Ouyahia predicted that the protests would mirror those that preceded the 2014 elections, which ultimately had no effect on the outcome. “Some of the protesters took to the street in the previous presidential elections, but the state proved to be capable of controlling the street,” he said at a press conference. He also called on opponents who wish to express their opinions to do so at the ballot box.

In the same vein, Abdelmalek Sellal, former prime minister and head of Bouteflika’s election campaign, urged Algerians to express their views wisely and away from chaos. During his meeting with representatives of the Association of Algerian Women on 18 February, he said, “[The government] accepts other opinions and has no problem with them; everyone should express their opinion, but peacefully and wisely.”

He added, “We should talk with each other no matter what…. The national forum promised by Bouteflika should he win the elections will be a real opportunity for achieving national consensus because it will be open to everyone and not a one-way process.”

Soufiane Djilali, head of the New Generation Party and a leading member of the anti-regime Democracy and Citizenship Movement, was quoted on the Arabique website as saying that “the movement rejected that worst scenario from the beginning, that is the candidacy of President Bouteflika, and it did its best to prevent this from happening because it is unconstitutional. However, that scenario has turned into reality”.

He went on to say, “President Bouteflika’s candidacy for a new term troubles our consciences and inflicts pain on the public national sentiment.”

Although Bouteflika’s candidacy has met with considerable resistance from opposition parties and some national political figures, the latter have not been able to agree on a candidate who can unite opponents of the current regime and win a significant number of votes. Neither could the opposition agree on whether to participate in or boycott the elections, a fact that will inevitably play into Bouteflika’s hands come election day.

However, this was not the case for the Movement of Society for Peace, the largest Islamist party in Algeria, which along with the National Liberation Front (FLN) and the National Democratic Rally Party (NDA) formed the presidential alliance between 2004 to 2012 before moving to the opposition. The movement decided to participate in the elections by nominating its president Abdulrazak Muqri as a candidate.

Similarly, the Vanguards of Freedoms party announced it was nominating Ali Benflis, former prime minister and the first political leader to defect from Bouteflika’s FLN in 2002.

Events evolved rapidly and unpredictably following these announcements. The sporadic protests in a handful of cities were followed by calls for peaceful marches across the country on 22 February 2019. The calls went out on social media, although the source remains anonymous. The response was strong across many states, notably the capital Algiers, in contravention of the anti-demonstration law promulgated in 2001 following the Amazigh spring uprising.

The protests were peaceful and civilized, and the security forces dealt with them professionally, setting rules for the events without banning them, and without resorting to repressive measures.

Protesters were even pictured hugging and kissing police officers and handing them roses, in addition to cleaning the venues of public marches where slogans were raised. The most prominent of these slogans were ‘No fifth term for Bouteflika’, ‘Peaceful peaceful’ (meaning that the demonstrations are peaceful and the people want to change the regime peacefully), ‘The people and the state are brothers’, ‘The people do not want Bouteflika and Saeed’ (the ailing president’s brother who is believed to be running the country behind the scenes) and ‘Go away Ahmed Ouyahia’ (a call for the prime minister to step down and a reference to his comment that the people were happy with Bouteflika’s candidacy).

The response to the calls to reject Bouteflika’s candidacy expanded dramatically as lawyers, university students, politicians and other groups got involved. It was also notable that public and private media workers organized rallies protesting the current situation and demanding freedom of the press and the media – a first in the country. Calls on social media to organize a million-strong march saw protester numbers swell on 1 March.

However, Bouteflika has refused to withdraw his candidacy. This was confirmed by Sellal and Ouyahia, who both added that peaceful protest is constitutionally guaranteed, as a result of reforms initiated by Bouteflika, and that the people have the right to express their opinion and everyone has the right to support any candidate they want at the ballot box.

Moreover, Lieutenant General Ahmed Gaid Salah, the National People’s Army chief of staff, stated that the Algerian people want to live in peace and that the army is committed to carrying out its constitutional duties and will ensure that the presidential elections are held calmly.

He added that the army will not allow anyone to push the people into scenarios that would lead to grave consequences, amid calls by unknown sources to mobilize Algerians to face an unknown fate. In this unprecedented show of resistance, it remains unknown what the current incidents will lead to, particularly in light of the authorities’ insistence on nominating Bouteflika for a fifth term and the people’s insistence on rejecting it and toppling the regime.

On 8 March, International Women’s Day, massive demonstrations were staged for the third week in a row. Protesters, many of them women, took to the streets to express their rejection of the status quo and demand regime change. The colors of the roses raised in the protests corresponded with the various political slogans demanding change.

Bouteflika failed to heed the people’s calls to withdraw his candidacy because he was undergoing medical examinations abroad. Consequently, calls were made for civil disobedience for five consecutive days starting 10 March, a call that was well received. Factory workers and civil servants boycotted their jobs. Moreover, private business owners closed their shops, applying additional pressure on the authorities. However, many political activists rejected this tactic, saying it would disrupt the protest movement and cause it to change course.

On Bouteflika’s return to Algiers, he announced in another open letter on 11 March that he would withdraw his candidacy and postpone the elections until further notice and only after reaching a national consensus on the way forward for the country.

It was a small victory for the protesters, who are still demanding radical change, including in the regime. 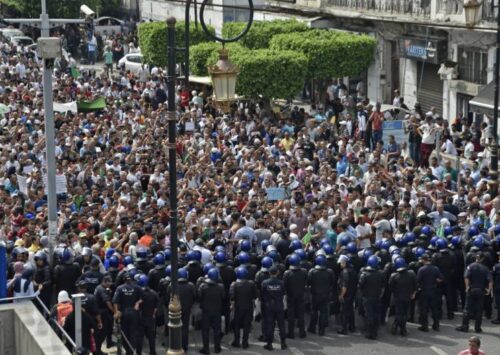