Fanack Home / Algeria / Past to Present / As Algeria Forges New Political Future, the Amazigh Will Play a Central Role

Algeria’s indigenous Berber people (who call themselves Amazigh) have been integral to the country’s revolutionary past and continue to play a central role in the ongoing political upheaval rocking the nation.

The authorities have cracked down on protesters waving the yellow, blue and green Berber flag during a series of protests in Algiers since February 2019, after former President Abdelaziz Bouteflika announced he was running for a fifth term. He has since stepped down.

In August, a court handed one demonstrator a ten-year prison sentence for taking part in the protests alongside a $1,600 fine.

The crackdown, which saw 41 protestors arrested in July alone, all of whom were flying the Berber flag during rallies or had it in their possession, was ordered by army chief and Bouteflika ally Ahmed Gaid Salah, who has become the de facto leader of the North African state.

Amnesty International called on the authorities to immediately and unconditionally release the protesters, describing the arrests as ‘absurd’. Those detained were charged with ‘harming the integrity’ of the country.

Releasing the protesters was a litmus test, said the global campaign group, for human rights reform in Algeria. At the same time, the authorities have been criticized for maintaining tight control of the demonstrators, whose demands include the removal of senior figures associated with a corrupt elite that has governed the country since independence in 1962.

The crackdown has occurred despite the Amazigh achieving greater recognition in recent years, including in the constitution. A 2016 amendment declared Tamazight, the Berber language, Algeria’s second official language after Arabic, and recognized ‘Amazighness’ as a part of the national identity. In 2018, the Amazigh new year was designated as a public holiday.

The cultural acknowledgment comes after years of struggle to restore the cultural diversity that was erased by the old military regime, which adopted Arabic and Islam as a unified national identity in opposition to French colonial rule. This identity was further cemented under the National Liberation Front (FLN).

The FLN was Algeria’s only constitutionally legal political party until 1989, and the fight for greater democracy hailed from the Amazigh who make up the majority of the population. Their symbolism became one through which a fairer Algeria could be realized.

The most notable moment in this fight occurred during what is now referred to as the Berber Spring, sparked on 10 March 1980 after the government cancelled a conference in the University of Tizi Ouzou with Kabyle poet Mouloud Mammeri. Kabyle is a major Berber-speaking region and the source of much of the Amazigh activism. The reason given for the event being struck off was that it could cause unrest. However, the decision was seen as state repression, and students and teaching staff responded by barricading themselves in the university while protests grew into a 200-strong march in Tizi Ouzou, the regional capital, the next day, which eventually snowballed into the thousands.

Tensions rose when police stormed the university, and reports of violence against the protesters emerged.

The Berber Spring entered a new phase in 2001, during preparations for the Spring’s anniversary celebrated on 20 April each year. Two days earlier, on 18 April, 18-year-old student Massinissa Guermah was killed in police custody in Tizi Ouzou, provoking riots that spread across the country and ended with 123 protesters losing their lives.

While a dark moment in history, the Berber Spring cemented a lasting legacy for Berber identity and saw the emergence of organizations such as the Rally for Culture and Democracy (RCD), a political party and the main power base in Kabyle, which has helped to realize the Berbers’ key demands.

Other groups with more far-reaching ambitions have also been formed, notably the Movement for the Autonomy of Kabyle (MAK), which seeks cultural autonomy from Algeria.

Jugurtha, a 26-year-old resident of Kabyle who uses the Twitter handle @Jeybroxer, told Fanack that he is against dividing up the country. “If we think in this way, then the Chaoui also need a president, as do the Touareg, Chinoui, Chleh, Rif…. They are all the original people of North Africa as well.” He believes that Salah is attacking the Berber flag in order to sow division between the Arabs and Amazigh.

“The Algerian situation right now is such a challenge for the government, because they have the power to crack down and to keep people from going out into the streets in a bigger way,” said Emily Hawthorne, a Middle East and North Africa analyst at the American-based geopolitical intelligence platform Stratfor. “But they’re very reticent to use the force and power that they have, because they don’t want the situation to snowball into greater violence and set off a bigger conflict and a bigger impasse.”

The crackdown on smaller movements is a strategy to divide and conquer the whole protest movement, said Hawthorne. Moreover, she noted, while the government, including the military, realize the Amazigh demand for cultural rights is a sensitive issue, it is not one all Algerians care about equally.

At the same time, Salah has been unwilling to engage with the protesters or step down the security forces deployed to monitor the civilian movement.

Rather, he has pushed for presidential elections as soon as possible under the existing government, in order to enshrine the status quo, according to Hawthorne.

However, many Algerians see Salah as another Bouteflika, and the army and government themselves remain divided over the concessions to be made, including releasing prisoners, as well as the country’s political future.

For now, Salah is refusing to lift his ban on publicly waving the Berber flag, calling it a threat to national unity.

“The Algerian flag is synonymous with the military and with the revolution against the French,” explained Hawthorne, adding that any other flag is seen as an affront to the spirit of the revolution and everything that the military fought for. “The Algerian military is the dominant political power in Algeria. And that’s something we at Stratfor don’t expect to change,” she said.

She may still be proven wrong as the movement in favour of a new political system is growing, even as the military tries to exert its dominance. The interim regime announced on 15 September 2019 that it had set presidential elections for 12 December 2019.

As the pro-democracy movement gains strength, chants during the weekly protests have included ‘We refuse to be led by Gaid Salah’ and ‘We’re sick of generals’.

Amid this political uncertainty, one this is clear: whatever the outcome of the December elections, the Amazigh will play a central role in Algeria’s new political reality. 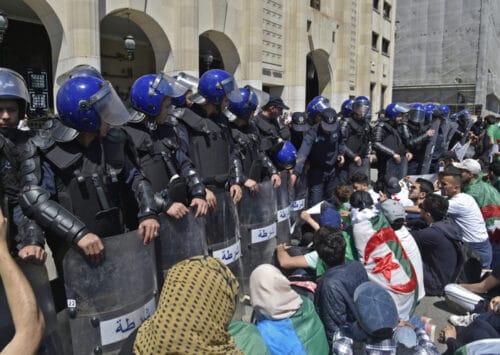 Who Rules Algeria 57 Years after Independence?
It can be said that Bouteflika came to and stayed in power with the support of the military. Over the next two decades, ...