Cocaine Seizure Stirs Up Algerian Politics Ahead of Presidential Elections

Corruption and embezzlement scandals involving high-ranking politicians, public servants, security officials and businessmen regularly make headlines in Algeria. But the most recent incident in the Mediterranean city of Oran, which implicates Algerian officials in the import and trade of narcotics, could upset the balance of power between the different clans that make up the regime ahead of the presidential elections in early 2019.

Following the spectacular seizure in May 2018 of 701 kilograms of cocaine, several security officials were dismissed while judges, prosecutors, mayors and even the children of senior politicians were associated with the case, highlighting Algeria’s increasing significance in drug trafficking in the region.

On 26 June 2018, President Abdelaziz Bouteflika sacked Abdelghani Hamel, general director of National Security (DGSN), without giving any reasons for the decision. Hamel, a close ally of Bouteflika, was replaced by the 79-year-old army colonel Mustapha el-Habiri.

Local and international media outlets as well as several opposition figures were quick to link Hamel’s dismissal to the cocaine seizure in Oran, as many questions about the drug bust remain unanswered.

The cocaine, hidden in a shipping container loaded with frozen meat, had been shipped from Brazil to Oran via Valencia in Spain, and was detected and confiscated by local authorities on 29 May 2018. The following day, the first suspects were arrested, including the Algerian businessman Kamal Chikhi, who made his fortune with real estate projects and meat imports.

Chikhi, who is often referred to as ‘the butcher’, is known for his links to government officials and public servants and – together with four other suspects – now faces multiple charges, including ‘trading, importing and distributing drugs’ and ‘money laundering’. Chikhi denied the charges, although authorities confiscated compromising video footage that allegedly shows meetings Chikhi had with Algerian judges and other officials, according to press reports.

The implication of government officials in drug trafficking is not surprising, Matthew Herbert, a research fellow with the Global Initiative Against Transnational Organized Crime, told Fanack Chronicle. “This mirrors similar efforts by traffickers and businessmen to corrupt government officials at other points along cocaine trafficking routes, such as Guinea-Bissau or Mali,” he said. “What is surprising is that the Algerian officials were openly linked to the case. Usually such affairs are kept fairly quiet.”

His comments point to the ongoing clan-based power struggle within the regime, which is likely to intensify in the face of low oil prices and the 2019 presidential elections.

Against this backdrop, Hamel’s dismissal was not unexpected. Only a day before he was removed from office, Hamel sharply criticized the investigations into the cocaine seizure carried out by the Ministry of Justice and the Gendarmerie, telling reporters while leaving a press conference in the capital Algiers that there were “excesses and violations during the preliminary inquiry”. But it was another comment that attracted attention. “If you want to fight corruption, you need to be clean,” several news outlets quoted him as saying. He lost his job the next day.

However, Hamel’s dismissal indicates that the decision is indeed linked to internal rivalries between several clans within the regime. Since the forced retirement of former intelligence chief Mohamed ‘Tewfiq’ Mediéne in 2013, the DGSN has gained immense influence in the country’s security apparatus. ‘Under Hamel’s direction, the national police … had risen in importance during the past ten years, becoming an indispensable check, for Bouteflika and his entourage, on the power of the … Algerian secret service, which was officially dissolved in January 2016,’ the Maghreb Times wrote.

Hamel was not the only security official who was sacked following his controversial remarks. On 4 July, Algiers’ security chief, Noureddine Berrachedi, was replaced by Mohamed Bettache, the former head of the city’s riot police. Meanwhile, Ghali Belekcir was appointed as the new commander of the Gendarmerie, an influential police force controlled by the Ministry of Defence. A further purge is expected in the ranks of the Gendarmerie following Belekcir’s swift appointment of a new Gendarmerie commander for the military region of Constantine.

The political implications aside, the cocaine seizure in Oran highlights Algeria’s growing significance for drug trafficking in the region. The trafficking route that connects South America with West Africa, from where cocaine is smuggled through the Sahara to North Africa and Europe, has become insecure since the massive deployment of foreign military and anti-terror units in the Sahel, especially in northern Mali and Niger. Accordingly, smugglers are increasingly avoiding these areas and trying to establish new routes, including shipping narcotics directly from South America to North Africa.

Herbert confirms a rise in cocaine seizures in North Africa, suggesting growing trafficker interest in the region. In Morocco, authorities confiscated more than 2.5 tons of cocaine in 2017 alone. A year earlier, Moroccan police discovered a professionally equipped cocaine production lab – the first of its kind ever found in Africa – in the city of Oujda near the Algerian border.

“The quantities involved in the Oran case suggest that the [Algerian] route had been used before,” Herbert said. “You do not test a route with a 700 kilogram shipment of cocaine, given the high value on the market. For them to attempt such a large shipment, the traffickers would have had to have been confident that the shipment would be safe from interception.” 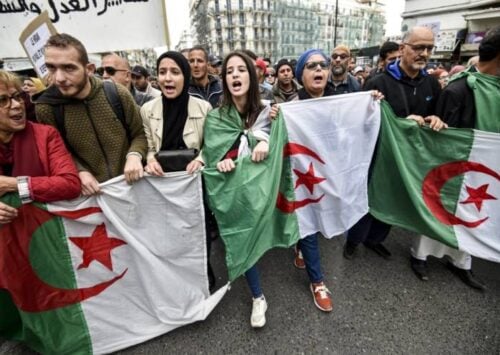 Following Election of New President, What Next for Algeria?
To a certain extent, Tebboune’s election makes sense because of his former position but also because as prime minister...