Algeria’s political tug of war reached a crucial moment as the ruling party, the National Liberation Front (FLN), called on President Abdelaziz Bouteflika to run for a fifth consecutive term in the ballot scheduled for spring 2019.

During a party meeting in the capital Algiers on 7 April 2018, the FLN’s Secretary General Djamel Ould Abbès made it clear that his party does not intend to give up its control of the country despite distinct ambitions of Bouteflika’s rival to take over the presidency.

“On behalf of all activists of the FLN, numbering about 700,000, and on behalf of its members and supporters, as secretary general I pledge to convey to the president of the republic the wish of the party’s members to see him continue his work as the president of the republic,” Ould Abbès said, according to the Algerian state-owned news agency APS. After the party’s endorsement, it is up to Bouteflika to make the final decision, he added.

Abdelkader Messahel, minister of foreign affairs and a member of the FLN’s Central Committee, also publicly supported another presidential run of the 81 year old, adding that under his leadership, “Algeria regained peace and security, and has become a reference in the field of de-radicalization, and resolution of international conflicts.” In an interview with the French news channel France 24, Messahel praised Bouteflika’s achievements since he took office in 1999.

After his last re-election in 2014, another term for the ailing head of state was ruled out by several regime figures due to the increasing outspoken opposition towards Bouteflika.

Although FLN and state officials have repeatedly claimed that he is physically and mentally fit to govern and carries out his duties as required, rumours about his health continue to swirl.

In March 2013, Bouteflika suffered a stroke and spent months recovering in a French hospital. He has been wheelchair-bound ever since and is barely seen in public, a fact that fuels speculation about his alleged deteriorating health. After he was barely able to read his oath of office after his re-election in 2014, government officials stopped publishing sound recordings of the president and instead turned to releasing photo and video footage showing Bouteflika’s participation in cabinet sessions or talks and meetings with foreign politicians during their visits in Algeria. Therefore, it comes as no surprise that media outlets and opposition forces are questioning Bouteflika’s ability to govern and strongly oppose another term by the FLN’s leader.

Three days after Ould Abbès’ endorsement of Bouteflika’s candidacy, the president appeared in public for the first time in more than 18 months and joined numerous state officials and ministers for the reopening ceremony of the Ketchaoua mosque and the inauguration of two new metro stations in Algiers.

Hundreds of FLN supporters were brought to the area by bus, waving pictures of Bouteflika and the Algerian flag at what the news website TSA Algérie called an informal election campaign kick-off and highlighted the absence of Prime Minister Ahmed Ouyahia, head of the FLN’s coalition partner National Democratic Rally (RND) and one of the most promising candidates for Bouteflika’s succession, during the visit.

Ouyahia has made no secret of his ambitions to run although he has been considered a close ally of Bouteflika’s clan for years. However, Ouyahia’s prospects for becoming Algeria’s next president are fading as his potential candidacy is strongly contested by the FLN, which considers itself as the leading faction of the heterogeneous Algerian regime.

In December 2017, Ouyahia announced he had reached an agreement with the state-controlled trade union federation General Union of Algerian Workers (UGTA) and the powerful Algerian Business Leaders Forum (FCE) on the partial privatization of several state-owned companies. But only two weeks later, on 3 January 2018, Ould Abbès called for a separate meeting with both the UGTA and the FCE, in which the privatization scheme was cancelled. Shortly after, Bouteflika published a statement in which he rebuked his prime minister over the privatization plan, providing further indications that the tug of war over policy decisions and governmental appointments within the regime is all but over.

These latest disputes come as little surprise at a time when Bouteflika’s succession is imminent. Riccardo Fabiani, a political analyst working on North Africa, argued that “everyone else will have to fall in line” after the FLN’s decision to endorse Bouteflika for a fifth term as the “various regime factions have opted for continuity to avoid divisions at a delicate time”.

Ouyahia only commented on the issue a week after the FLN endorsed Bouteflika’s candidacy, and voiced his own support for a fifth term. However, another confrontation between the two major regime factions ahead of the elections cannot be ruled out as the latest conflicts within the ruling class are increasingly connected to policy decisions regarding the economy and how to deal with social unrest. 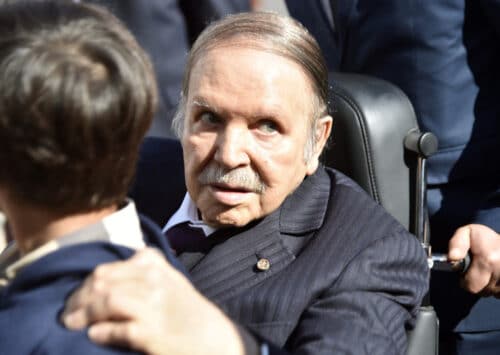 Baffling Shake-up within Algerian Regime Entities continues to raise Questions
While neither the presidency nor the Ministry of Defense provided any official explanation for the dismissals, local med...