France’s Recognition of Colonial Crimes in Algeria Gets Mixed Response

Emanuel Macron, the first French president born after the Algerian War (1954-1962), caused controversy during his election campaign when he declared in February 2017 that France’s colonization of Algeria was a crime against humanity, true brutality and “part of the history that we must face by apologizing to those against whom we have committed such practices”.

His statements were welcomed in Algeria, but they caused extensive debate in France, where Macron was criticized by the far-right Front National party competing with him in the presidential race. Soon after being elected, however, Macron announced a new position. “We admit but we do not apologize,” he said about France’s colonial history in Algeria, stressing that France should not be caught up in the past but rather must overcome it to move forward and establish French-Algerian relations based on common future interests.

Less than a year into his presidential term, Macron admitted that the French communist rebel Maurice Audin, who championed Algerian independence, was tortured to death in 1957 by the French army. During a visit to eastern Paris on 12 September 2018, Macron singled out Josette Audin, Maurice Audin’s widow, and handed her an official letter on behalf of the French state, asking forgiveness for the pain caused by the abduction, arrest and assassination of her husband.

Audin was a 25-year-old assistant professor at the University of Algiers when French forces arrested him outside his house on charges of harbouring communists supporting independence. He was tortured in a detention center in Algiers. Ten days after he disappeared, his wife was told that he had escaped while being transferred to another prison. This was the official narrative until 2014, when Macron’s predecessor, Francois Hollande, admitted that Audin had been tortured to death while in French custody.

Macron also made references to the possibility of other initiatives in the future regarding painful incidents that took place during the Algerian War, saying, “It is important to know this [Audin’s] story and to face it courageously and clearly. This is important because it will give solace and peace of mind to those who have lived the pain … in both Algeria and France.” He promised to reopen the files of disappeared French and Algerian civilians and soldiers during the war. The promise for which the Algerians have waited decades, could be politically motivated and could be aimed at protecting political and military figures who were involved in crimes committed during the conflict.

Algeria’s official response was announced by Tayeb Zitouni, Minister of Mujahideen (Algerian veterans opposed to colonialism), who said in a press statement: “The statement made by French President Emanuel Macron marks a new chapter in the history of bilateral relations between the two countries; it is proof that the pending historical issues between France and Algeria will be resolved; and that France and Algeria will deal with the file of the past memories wisely.”

The broader political reaction has ranged from positive to reluctant to non-existent. The National Liberation Front (FLN), which has been the ruling party since independence and started and led the fight for independence, has not issued an official response. Moreover, organizations representing revolutionary families, including the Sons of Martyrs Organization and the Mujahideen Organization, were uncharacteristically quiet. This could indicate that the timing of Macron’s acknowledgement was designed to bolster Algerian-French relations. These have been tepid since France’s trade dealings with Algeria have been redirected to China, the United States and Germany, which in turn are improving their relations with Algeria and intensifying trade activities with it.

While some parties and prominent figures expressed their positions powerfully, Abdelaziz Belkhadem, former prime minister (2006-2008) and secretary-\ general of the FLN (2005-2014), took a different stance. Belkhadem was removed from political life by President Abdelaziz Bouteflika in 2014 for reasons that remain unknown but may have to do with the battle to succeed Bouteflika. Belkhadem said in a press statement published on the website of Alain al-Ikhbariya on 13 September 2018 that the French move is not important and came very late. On whether Macron’s apology to Audin’s widow and his admission of the crimes committed against him by France paves the way for further recognition and apologies for all crimes committed in Algeria, Belkhadem said that the French will admit sooner or later that colonialism is a crime, that they committed atrocities against Algerians and that they will apologize.

The website of the Elhiwar newspaper cited Shehab Siddiq, spokesperson of the National Democratic Rally – the pro-regime party and the second largest political force in Algeria after the FLN – said that the step taken by Macron is positive and will be followed by other steps, especially with regard to the dossier of the Algerian War that has become the talk of elite groups in the two countries. Both the Algerian and French sides have to settle the issue because French-Algerian relations are strong but complicated at the same time in view of that dossier. France will inevitably admit over time its responsibility for the crimes committed during the colonial era.

Ramadan Tazibt, the leader of the Socialist Workers’ Party, said that Algeria had nothing to do with Macron’s recognition of France’s assassination of Audin. Tazibt stressed the need not to interfere in the issue because it is related to the French state, the French government and the French people. He added that Algeria defeated French colonialism, took back its freedom and paid a heavy price to restore its sovereignty. He also noted that colonialism has been condemned throughout history as a crime against humanity and an infringement on peoples’ and nations’ indisputable rights.

Abd al-Razzaq Maqri, leader of the Movement for the Society of Peace, the Islamic party that formed the coalition supporting Bouteflika from 1999 until 2012, took a different position, saying on 14 September 2018: “We do not doubt that Maurice Audin was one of the heroes of the Algerian revolution, and we take pride in him. However, President Macron’s apology to Audin’s family, not the families of the Algerians killed and tortured during the revolution of liberation, is French racism, and Macron’s act is a sign of disrespect for Algerian officials and the Algerian people as a whole.”

The Algerian people had varied reactions too, although they largely regarded Macron’s statements as insignificant and a political manoeuvre designed to advance French interests and bolster Macron’s popularity at home, which has dropped by 37 percent according to the latest opinion polls. They also blamed the Algerian regime for collusion with the French authorities and for not making enough effort to address French colonial crimes in Algeria.

Many Algerians see Macron’s remarks as similar to those made by former French presidents, including Nicolas Sarkozy, who described the colonialist system as “unfair”, and Francois Hollande, who called it “unjust and brutal”. These statements were worded in such a way as to avoid directly condemning the French colonial regime, making a proper apology and paying compensation for what have been described as some of the most brutal crimes in modern history.

Academics and civil society activists took a more positive view, saying they were hopeful that Macron’s remarks would lead to other acknowledgements of wrongdoing. For example, following Macron’s recognition of the state’s involvement in Audin’s death, the French-language daily El Watan published a copy of a letter dated 28 September 2018, by the female mujahid Zarifa Ben Mhidi, sister of martyr Arabi Ben Mhidi, one of the 22 leaders who started the Algerian revolution in 1954 and one of its most prominent leaders. Ben Mhidi was arrested, tortured and then extrajudicially executed on 4 March 1957, although the French authorities declared that he had committed suicide in his cell. In the letter, Zarifa Ben Mhidi called on the French president to show courage again and do the same for her brother and all other Algerians who suffered the same atrocities.

Other segments of society feel overlooked. Mohammed Mahmoudi, national coordinator of victims of the French nuclear tests in the Algerian Sahara in 1960, said: “We condemn Macron’s statements, which recognized his country’s responsibility for the torture of Audin, without mentioning France’s crimes against the victims of nuclear bombings in Algeria.”

Ahmed Mizab, an academic and security expert, said in a statement to Alghad Television that what Macron did was a positive step but remains a drop in the ocean because the pending historical issues between Algeria and France are much more serious, and France should recognize its crimes against civilians and apologize to the victims of the nuclear tests, the effects of which are still felt. One should view this step in its own context, he said, because France is involved internationally and regionally in several files and is searching for a way out, so it is using the file of the French colonialism in Algeria as one way to improve its image. He noted that Macron’s move remains below expectations and the Algerians are waiting for much more. As a result, France should be brave enough to deal with all the pending issues, including its colonial history in Algeria.

According to the Algerian newspaper Elhiwar, academic and political analyst al-Jalaly Kris had a different opinion. He described Macron’s recognition as offensive and nothing but an attempt to manipulate history. This is because French colonialism did not kill Audin alone but hundreds of thousands of Algerians who perhaps died an even more gruesome death. He called on the Algerian people and government not to submit to what France is doing. He recalled that Macron had said before being elected that he would reopen the Algerian-French file but failed to fulfill his promises after becoming president. He also said that Macron could not make the apology because he does not belong to the generation of the revolution.

New developments regarding French recognition of and possible compensation for France’s colonial crimes may emerge during Macron’s expected visit to Algeria and ahead of the Algerian presidential elections, slated for April 2019. Despite criticism from various quarters, Macron is the first French president to officially recognize that France established a system for detention and torture and that it arrested and tortured Audin to death. Macron also opened the door for whomever has documents and testimonies to present them and prove similar facts. Although he has reneged on a number of election promises, his actions could pave the way for recognition of other colonial crimes in Algeria. 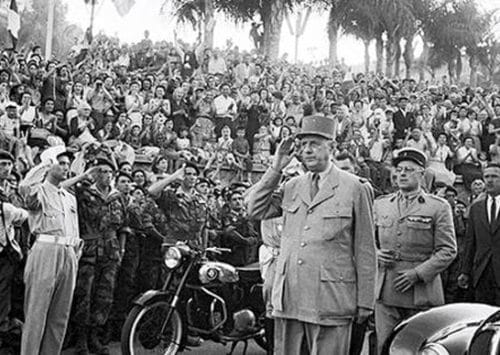