The Algerian authorities have clamped down on migrants in recent months, as the number of departures from the country’s coast reached a new high. Between 16 and 18 November 2017, 519 people in dozens of small boats were rescued by Spanish authorities after crossing the Mediterranean, apparently from Algeria, according to Francisco Bernabe, the Spanish government’s representative in the region of Murcia. Bernabe called these latest arrivals “a coordinated and unacceptable attack” on Spain’s borders.

In the past decade, Algeria has primarily been a transit country for sub-Saharan migrants on their way to Morocco to the west or Tunisia and Libya to the east, the main embarkation countries for migrants and refugees heading to Europe from North Africa. Due to stricter border controls and increased surveillance in its frontier districts, coupled with the European Union’s (EU) campaign to reduce irregular migration in the Mediterranean, more and more sub-Saharan migrants have become stranded in Algeria.

Algeria has been ramping up security at its borders for a while, starting with the construction of an electronic fence along its border with Mali in 2012. The increasing militarization of its borders with Morocco and Libya has been ongoing since 2015. The Algerian-Moroccan border, which has been officially closed since a terror attack in the Moroccan city of Marrakesh in 1994 which was linked to the Algerian civil war, is equipped with dozens of newly established border posts run by a military border security unit, a barbed wire fence and a deep trench partially filled with water.

Algeria has also intensified its security cooperation with its other neighbours, installing thermal imaging cameras and erecting a sand barrier on its border with Tunisia and an electronic fence on its border with both Tunisia and Libya. At the same time, the Algerian army continues a large-scale upgrade of its naval and border guard forces. It has imported weapons, arms and vehicles from Germany, Italy, Russia and China as well as whole factories for the licensed local assembly of vehicles, naval vessels, tanks and helicopters.

As a result of these measures, sub-Saharan migrants and refugees trying to cross North Africa have been forced to stay in Algeria, a trend that has fuelled anti-migrant sentiment and xenophobia among Algerians. In the spring of 2017, the controversial online campaign ‘No to Africans in Algeria’, which framed sub-Saharan migrants as a threat, went viral and heralded a significant political shift to the right.

In July 2017, Ahmed Ouyahia, then the head of President Abdelaziz Bouteflika’s cabinet, accused migrants of bringing “crime, drugs and other plagues” to the country. The “state should protect Algerians from anarchy by imposing strict rules on these people”, he continued. Foreign Minister Abdelkader Messahel claimed that sub-Saharan migrants are involved “in crime and drug trafficking”.

Although Ouyahia’s predecessor, Abdelmadjid Tebboune, announced a formalization campaign for migrants living in Algeria, promising to grant residence and work permits to an unspecified number of sub-Saharan nationals, it remains unclear if the current administration is willing to proceed with the initiative as Ouyahia is well known for being a hardliner in migration-related issues.

Indeed, when Ouyahia took over as prime minister in August 2017, the Algerian authorities launched a sweeping crackdown against sub-Saharan migrants. The police and gendarmerie selectively and arbitrarily arrested sub-Saharans in their homes and workplaces, on public transport or in the streets and transferred them to security camps. From there, they were transported in large bus convoys to Tamanrasset, a remote city in the Sahara Desert 2,000 kilometres south of the capital Algiers, and subsequently expelled, usually to Niger or Mali.

The crackdown intensified in September 2017 and focused heavily on the country’s urban north. Human Rights Watch estimates that Algeria has arrested and expelled at least 3,232 migrants to Niger since August 2017. Local and international human rights groups as well as trade unions have repeatedly condemned the crackdown and called on the government to abide by the international treaties to which Algeria is a signatory, including the 1951 Geneva Convention.

“There can be no justification for rounding up and forcibly deporting hundreds of people based on the colour of their skin or their assumed country of origin – a blatant case of mass racial profiling,” said Heba Morayef, Amnesty International’s North Africa Research Director, in a statement.

For its part, Niger is struggling to cope with the sudden arrival of thousands of its nationals and has criticized Algeria for what it regards as an arbitrary crackdown on African immigrants. Niger’s Minister of Foreign Affairs Ibrahim Yacoubou stated that Algeria has deported more than 20,000 Nigeriens since 2013.

The latest expulsion campaign is not the first of its kind. Algeria has carried out several similar campaigns since Niger and Algeria signed a repatriation agreement in December 2014. Nevertheless, the latest wave of arrests and expulsions is unprecedented in its scale.

Migration from Maghreb Countries on the Rise

Meanwhile, Algeria’s navy intercepted 286 people in small rubber boats in the country’s territorial waters in the far east and west of the country within three days in mid November 2017. In 2016, the navy intercepted 1,206 people leaving for Italy and Spain. In 2017 to date, Algerian authorities have arrested more than 4,000 people, mostly Algerian nationals, trying to cross the Mediterranean.

“Every day, there are up to four or five boats leaving the area of Annaba alone,” an Algerian lawyer based in eastern Algeria told Fanack Chronicle. He added that most of these people are not from sub-Saharan Africa but Morocco, Tunisia and Algeria. Even whole families of up to 20 people are trying to leave the country irregularly, he said.

Since 16 November 2017, a total of 962 people have arrived in Spain, 562 of which are reportedly Algerian nationals. In October 20117, the Italian authorities arrested or intercepted 3,436 migrants from Maghreb countries (Mauritania, Morocco, Algeria, Tunisia and Libya). In the same month in 2016, the number of Maghreb nationals arrested in Italy was 1,093.

The main reason for this significant rise in Algerian migrants is the ongoing economic crisis. The massive drop in oil and gas revenues in 2014 led to a growing budget deficit and a heavy decrease in foreign currency reserves. As a result, the government was forced to cut back on food and fuel subsidies and social housing projects. Food prices, including for basic goods such as sugar, vegetables and oil, have skyrocketed, and unemployment and inflation are high.

As the government stalls on economic reforms that could boost employment, the social and political pressure on the ruling elite appears to be fuelling the latest campaign against sub-Saharan migrants as well as the xenophobic rhetoric of government officials, in a clear attempt to lay the blame for the country’s economic woes elsewhere. 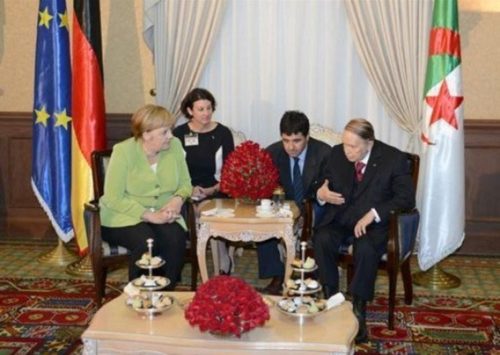 SAMUEL ARANDA ©AFP
SAMUEL ARANDA ©AFP
"Ignorance leads to fear, fear leads to hatred, and hatred leads to violence.
This is the equation."
IBN RUSHD/AVERROES (1126 – 1198)
We are a Dutch not for profit organisation (NGO), financed solely by individuals who share our belief in the importance of publishing and disseminating reliable, unbiased information on the Middle East & North Africa region. To represent the voice of the region’s people, we carefully echo the region’s heartbeat by offering fact-checked and therefore credible information.
Your support is greatly appreciated and helpful!
Donate