Ten years after her first visit to Algeria, German Chancellor Angela Merkel was received in the capital Algiers by numerous high-ranking Algerian government officials on 17 September 2018 for bilateral talks on economic cooperation and migration issues.

However, no business delegation joined the chancellor for her trip to the North African country, according to the German government’s deputy spokesperson Ulrike Demmer during a press conference in Berlin only days before Merkel’s arrival in Algiers. Neither were any new agreements on German investments in Algeria signed or even announced during or after the visit.

Merkel and Algerian Prime Minister Ahmed Ouyahia only emphasized during a press conference in Algiers the importance of German investments in Algeria, adding that general discussions about 20 different projects had been held.

Instead of the expected announcement of new bilateral economic projects, negotiations about repatriations of Algerian nationals residing illegally in Germany and migration-related issues dominated the talks.

Since the so-called ‘refugee crisis’ in Europe in 2015, the European Union (EU) has massively intensified its efforts to externalize its border regime to North African shores in an attempt to reduce migration flows toward the EU. Sub-Saharan nationals on their way to Europe who used Algeria as a transit country in the past are now increasingly stranded in Algeria as the heavily expanded border control regime in the Mediterranean prevents many migrants from continuing their journey further north. To counter this, Algeria has stepped up its efforts to control irregular migration on its southern borders, which includes mass repatriations of sub-Saharan nationals to neighbouring Niger and Mali. Meanwhile, the EU is pushing the country to further strengthen its migration-related cooperation with European governments.

Against this backdrop, it came as no surprise that Merkel and Ouyahia declared that both governments had agreed on arrangements for repatriation procedures for Algerian nationals living illegally in Germany. This is based on the bilateral repatriation agreement signed in 1997 as the EU’s comprehensive approach to prevent irregular migration includes attempts to expand readmission procedures for non-European nationals.

“I confirm that Algeria will take back its children, whether it is 3,000 or 5,000,” Ouyahia said during the joint press conference after the meeting with Merkel, which was attended by several key Algerian ministers. Although Ouyahia emphasized that his government will not accept charter flights as a means of deporting Algerians, he highlighted the willingness of the Algerian authorities to cooperate with the German government on repatriations.

However, it remains unclear why Merkel and Ouyahia framed the issue of repatriation procedures in this manner as several constraints to the readmission of Algerian nationals from Germany to Algeria were apparently already solved last year. In 2015, Germany only deported 57 Algerians. That figure increased significantly in 2017 to 504. In the first seven months of 2018, German authorities have already repatriated 350 Algerians, according to figures provided by the German Ministry of Interior and quoted by the German newspaper Rheinische Post. According to the German Central Departure Register, there are currently 3,684 Algerian nationals who are obliged to leave the country, while about 1,500 asylum cases are still being examined by the German authorities.

Meanwhile, Ouyahia strongly rejected the accusations of mistreatment of migrants and refugees by the Algerian authorities made by several local and international human rights groups in recent weeks. “We are accused of throwing Africans into the desert. This is wrong,” he said, adding that recent repatriations of sub-Saharan nationals to Niger were conducted in cooperation with the International Organization for Migration and the UN refugee agency UNHCR.

Furthermore, Merkel emphasized during the press conference that her government considers Algeria as a “safe” country, a remark considered to be linked to the efforts of the German government to declare Morocco, Algeria and Tunisia as ‘safe countries of origin’, a classification that would make repatriation procedures of nationals of these three countries easier and faster, according to German and European regulations on repatriations.

Nevertheless, the boom in trade between the two countries in recent years is also closely linked, at least in part, to the EU’s attempts to externalize its border regime to African shores. Due to the ongoing war in northern Mali as well as general security concerns linked to Algeria’s bloody civil war in the 1990s, which was fuelled by armed extremist groups operating in the Sahel region, the Algerian government massively upgraded its military in the past 15 years. While Russia remains Algeria’s largest supplier of military equipment, Germany has become the second most important provider of equipment for the Algerian army and the Ministry of Interior.

German-Algerian trade has almost doubled since Merkel’s first official visit to Algeria in 2008. A significant part of this increase is due to a 10 billion euro arms deal approved by the German Federal Security Council in 2011, including the establishment of three assembly plants for Mercedes-Benz 4x4s vehicles (G-Class), transport lorries (Sprinter) and military trucks (Zetros) as well as the military APC ‘Fox’, engineered by the German arms producer Rheinmetall and assembled in Algeria in cooperation with the German company MAN and an Algerian state firm.

Production in the Mercedes-Benz assembly plants began in 2012, while the German government confirmed that the assembly plant for the ‘Fox’ tank has been operational since May 2018.

When those arms deals were signed in 2010, they were mainly intended to strengthen Algeria’s capabilities to deal with armed groups operating in Algeria’s Sahara Desert and secure its borders in the wake of a string of terrorist attacks by these groups. Although combating irregular migration and human smuggling in the Sahel region was already imminent in 2010, its significance for the EU and its member states such as Germany has increased massively since 2015. It is therefore expected that Germany and Algeria will continue to cooperate closely in this domain as the war in Mali remains a significant security threat for Algeria. Meanwhile, human smuggling and migration continue to affect political discourses in Algeria and Europe. 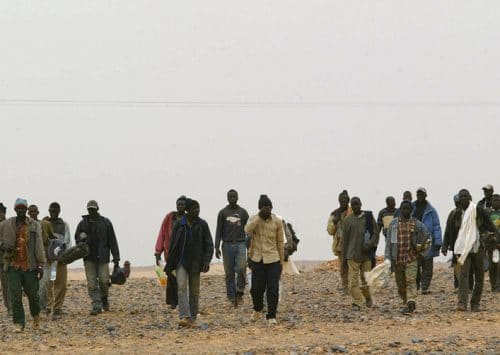 Is Algeria North Africa’s New Migration Hub?
As a result of these measures, sub-Saharan migrants and refugees trying to cross North Africa have been forced to stay i...