The installation of metal detectors outside the al-Aqsa Mosque compound in the Old City of Jerusalem and the shooting of two Jordanians by an Israeli security guard in Amman in July 2017 has inflamed tensions in occupied East Jerusalem and Jordan, Israel’s uneasy ally and the custodian of the holy site.

The conflict over al-Aqsa is the latest flare-up in the long-running dispute between Israel and Palestinians living under its control. The conflict over territorial sovereignty is much broader than the mosque, but the site has always been a flashpoint. The compound where the mosque is located – known as al-Haram al-Sharif or the Noble Sanctuary by Muslims and the Temple Mount by Jews – is one of the holiest places in both Judaism and Islam.

Before installing the metal detectors, Israeli authorities had restricted access to the mosque in other ways, including imposing age restrictions that barred young men from entering for prayers. There have also been recent clashes over Jewish activists praying at the site, which is reserved for Muslim prayer under the agreement governing its use.

The metal detectors were installed after three gunmen emerged from the mosque on 14 July 2017 and shot dead two Israeli Druze policemen at the compound. The attackers, all of them from Um al-Fahem, a Palestinian city in northern Israel, were killed by police.

Palestinians protested the installation, which was seen as an encroachment of Israeli control over the site and a violation of the historical status quo governing it. Many refused to step through the detectors and instead held their prayers outside the compound. During large-scale demonstrations in East Jerusalem and the West Bank, violence erupted and four Palestinians were killed. On 21 July 2017, three members of an Israeli family living in a West Bank settlement were stabbed to death by a Palestinian from a neighbouring village.

Israeli supporters of the metal detectors said they were needed to preserve security. Tzachi Hanegbi, the minister for regional development and a senior member of the ruling Likud party, told Army Radio: “The murderers will never tell us how to search the murderers. If they [Palestinians] do not want to enter the mosque, then let them not enter the mosque.” Meanwhile, Palestinians argued that Israel had used the security problems at the compound as an excuse to curtail access to the site.

Diana Buttu, a Palestinian lawyer and former legal advisor to the Palestinian Liberation Organization, wrote in an opinion piece for al-Jazeera, ‘To be clear, no Palestinian wants to see their holy sites turned into places of armed conflict. But using the guise of “security”, Israel has ensured that we, Palestinians, live as prisoners in our homeland.’

In a phone call on 24 July 2017, King Abdullah of Jordan urged Israeli Prime Minister Benyamin Netanyahu to remove the metal detectors, according to the Jordanian state news agency.

The White House also issued a statement, calling for Israel and Jordan ‘to make a good faith effort to reduce tensions and to find a solution that assures public safety and the security of the site and maintains the status quo’.

After a lengthy meeting on 24 July 2017, Israel’s cabinet voted to remove the metal detectors. A senior official who attended the meeting said they would be replaced by “advanced technological means” that will enable “smart inspection” throughout the Old City to ensure the security of visitors and worshippers.

However, even as the devices were being taken down, hundreds of Palestinians continued to protest against the security cameras that remained. Al-Aqsa official Sheikh Raed Saleh told al-Jazeera that Palestinians will “never accept the current status, unless everything that was added after 14 July is removed”.

Meanwhile, Jordan’s role in the controversy was further complicated by the 23 July 2017 killing of two of its citizens by an Israeli embassy guard in his apartment in Amman. Mohammad Jawawdeh, a 16-year-old Jordanian of Palestinian origin who was working for his father’s furniture shop while on summer break from school, and Bashar Kamel Hamarneh, the owner of the apartment and a prominent Jordanian Christian doctor, had gone to deliver new furniture.

According to the Jordanian Public Security Directorate, Jawawdeh got into an argument with the guard over a delay in completing the work. During the argument, Israeli officials said, the 16-year-old stabbed the guard with a screwdriver. The Israeli shot and killed the boy. Hamarneh was also shot and died in hospital several hours later. The Israeli was injured in the skirmish.

Jordanian authorities sought to question the guard, but Israel maintained that he was protected by diplomatic immunity and should be returned to Israel. Under the deal eventually reached, Jordanian police were allowed to hear his description of events in the presence of Israeli diplomats at the embassy compound, after which the entire embassy staff, including the guard, departed for Israel. The Israeli’s military censor initially attempted to impose a media blackout on the incident.

Lamis K. Andoni, a Jordanian journalist of Palestinian descent who knew Hamarneh from their school days and met with both victims’ families following the shooting, told Fanack that the families felt that “there will be no justice for their sons”.

She added that the events involving al-Aqsa and the shootings in Amman had further undermined public opinion of the king, who is the guardian of the mosque and therefore considered by Jordanians to be personally responsible for it.

“Again the palace makes a deal with Israel at the expense of our rights,” she said. “If the king thinks that this deal is a face-saving deal, he’s very wrong. It has weakened him … The only thing that is working for him is that people are afraid of chaos.” 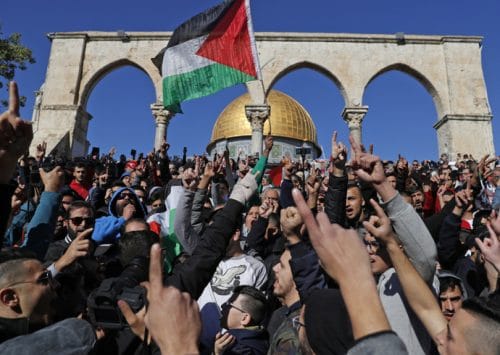 Unilateral Laws Still Israel’s Favourite Tool to Control Jerusalem
Today, Palestinians in Jerusalem number about 300,000. They have learned from years of war and discrimination the simple...