Over the years, Israel has punctuated brief, intense and increasingly frequent escalations. One of the bloodiest was in March 2012, when Israeli forces launched a four-day attack on Gaza, leaving 25 dead and 100 injured. Hamas responded by firing rockets into Israel.

In the afternoon of 14 November 2012, Israel launched its largest military campaign against the Gaza Strip since the invasion in December 2008/January 2009. Before launching the attack, Israel secured support from the United States and Europe. The Israeli government stated that the aims of the military operation were to ‘strengthen our deterrence; to inflict serious damage on the rocket-launching network; to deliver a painful blow for Hamas and the other terrorist organizations; to minimize damage to our home front’. Since then Israel has maintained the siege on Gaza by denying Palestinians access to a 300-1,500 metre-wide imposed ‘buffer zone’ and free entry of persons and goods into the territory, by shelling areas close to the Gaza-Israeli border, firing at Palestinian fishermen crossing the three-nautical mile limit, and by the extrajudicial killing of Gaza militants. The border has witnessed weekly Israeli incursions, leading to rocket attacks from the Palestinian side, by Hamas and non-Hamas fighters.

On 8 November 2012, Israeli forces made an incursion into the north-east of Khan Yunis, thereby fatally injuring a thirteen year old child. Two days later Palestinian fighters attacked an Israeli army patrol near the Gaza border, injuring four Israeli soldiers. Israel subsequently attacked civilian neighbourhoods, killing four Palestinians. Shortly afterwards Reuters reported that a truce had been brokered by Egypt. However, this was shattered after Israel assassinated Ahmed Jabaari in an airstrike on November 14th. Jaabari was the second-in-command of the military wing of Hamas. He was a leading figure in the Hamas takeover of the Gaza Strip in 2007, and played a role in the capture of Israeli soldier Gilad Shalit.

An Israeli source – Gershon Baskin of the Israel Palestine Centre for Research and Information (IPCRI), who earlier mediated between Israel and Hamas in the prisoner swap between captured Israeli soldier Gilad Shalit and Palestinian political prisoners in Israeli prisons and who was still in contact with Jabaari over a truce agreement – stated that Jabaari, hours before his assassination, had received a draft text, ‘which included mechanisms for maintaining the cease-fire in the case of a flare-up between Israel and the factions in the Gaza Strip’. Israel seemingly was not looking for a ceasefire. Egyptian and other Arab diplomats strongly condemned the assassination.

After the start of the Israeli military offensive the number of Palestinian casualties rapidly rose. Israel targeted houses, mosques, schools, the offices of aid agencies, and radio and TV stations. More than eight thousand houses were severely damaged and two hundred houses completely destroyed. Hospitals, including al-Shifa Hospital in Gaza City, were soon running out of medical supplies, as they were struggling to cope with the number of casualties. According to the World Health Organization, more than 40 percent of the essential drug items and more than 50 percent of medical consumables were already out of stock before the outbreak of the hostilities.

In the course of the eight-day offensive the Israeli Air Force would carry out 1,500 attacks, targeting as many sites, according to the Israeli Ministry of Foreign Affairs. That is three times as many as during the 2008/2009 campaign which lasted for 22 days.

In response, Hamas aimed anti-aircraft missiles at Israeli fighter planes, and fired over 1,500 rockets and mortars into southern Israel. Some even reached the outskirts of major cities such as Jerusalem and Tel Aviv, despite Israel’s sophisticated Iron Dome air-defence system.

In the end the death toll rose to over 185 and over 2,000 injuries, most of whom civilians. The Palestinian Chamber of Commerce estimated that damage to the agricultural, health and social sectors amounted to USD 300 million. According to Hamas spokesman Taher al-Nunu direct damage caused by the Israeli airstrikes will cost USD 545 million to rebuild, while indirect damages are estimated at some USD 700 million.

Six Israelis were killed, two of whom soldiers, and around 200 were injured. The material damage was limited.

Unlike during the 2008/2009 offensive Egypt kept the Rafah Border Crossing open. While the Israeli military and Palestinian fighters continued to exchange fire, on 16 November 2012 Egypt’s Prime Minister Hisham Kandil visited the Gaza Strip, which was seen as a clear sign of support. High-profile visits multiplied, from the Turkish Minister of Foreign Affairs, who has branded the Israeli military offensive a ‘crime against humanity’, the head of the Arab League, as well as several other Arab ministers of Foreign Affairs.

By calling up 70,000 reservists, Israel indicated it was preparing itself for a large-scale military offensive. However, the Israeli government seemingly underestimated the firm response from Arab and Turkish political leaders, which was at odds with 2008/2009 due to the new political balance since the start of the Arab Spring in 2011. In an early stage of the hostilities, US Secretary of State Hillary Clinton and UN Secretary General Ban Ki-moon shuttled between Egypt, Israel and the occupied West Bank in a bid to bolster a proposed ceasefire-agreement between Hamas and Israel, brokered by Cairo.

Eventually a ceasefire took effect on 21 November 2012. Hamas’ demands appeared to have been met: an end to the targeted killings, the easing of restrictions on the movement of peoples and goods and the opening of the border crossings. The Palestinian attacks were to cease, yet an end to the smuggling of arms was not mentioned.

All in all Hamas came out as the victor of this round of confrontation with Israel: militarily as it was capable to face Israeli forces and reaffirm its staying power despite the huge blow it suffered, and politically as Hamas attracted unprecedented international attention while turning President Mahmoud Abbas and the Palestinian National Authority into passive bystanders who had no say in the negotiations process nor in the deal that led to a ceasefire.

After the ceasefire, the mood in the Gaza Strip was jubilant, the streets filled with honking car horns, fireworks and victory announcements from loudspeakers. Shortly afterwards, the inhabitants of Gaza celebrated the arrival of Hamas leader Khaled Meshaal, who had been in exile since the 1967 June War. At least 200,000 Palestinians on 7 December 2012 attended a rally in Gaza City, which was used by Meshaal to promote Hamas’ growing stature in the Arab world and push the case for reconciliation with the Palestinian National Authority. Delegations from Qatar, Malaysia, Turkey, Egypt and Bahrain attended the rally too, as well as local Fatah leaders who had not taken part in any such event since at least 2007. 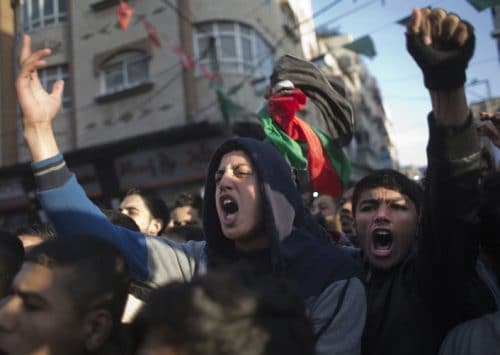 Gaza Electricity Crisis Sparks Protests, Alarms Hamas
In addition to the technical and financial problems, the electricity crisis in Gaza is political. Gazans are angry mainl...