The Arab Peace Initiative (API), which the Saudis proposed in March 2002 to resolve the Palestinian and Israeli conflict, is dead. The proposal was first announced at an Arab League Summit in the Lebanese capital Beirut and was considered by many Western observers as an offer that Israel could not refuse.

The terms of the deal were simple: Arab nations would establish full diplomatic ties with Israel in exchange for a Palestinian state along the 1967 borders. To get Israel to agree, the API even adopted an ambivalent stance towards the right of return for Palestinian refugees, a condition that more than 4 million Palestinians living in exile consider unnegotiable.

Sixteen years later, the API is all but doomed after the Saudi Crown Prince Mohammad bin Salman (MBS) told Palestinians to “accept peace” or shut up. His remark was made at a March 2018 meeting in New York with American-Jewish organizations. The Palestinian issue, he continued, was no longer a priority for the kingdom due to much more pressing issues in the region.

Nadia Hijab, the president of the pro-Palestinian think tank al-Shabaka, told Fanack Chronicle that most Palestinians were not surprised by MBS’ remark, given the trajectory of the new Saudi regime. She added that any lingering hopes that the Palestinian Authority (PA) had in receiving political support has now dissipated.

“[The remark] was a wake-up call to the PA leadership to rebuild its indigenous sources of power, she said via email. “Their first steps [should be] to end security collaboration with Israel, learn from past failures and learn as well as ally with [Palestinian] civil society.”

Other experts believe that the API was doomed from the moment it was proposed. Ariel Sharon, then Israel’s prime minister, dismissed it completely. His successor, Ehud Olmert, later entertained the proposal but argued that Palestinians should make further concessions.

But Palestinian leaders, who were fed up with the failed Oslo Accords, wondered what other possible concessions they could make. Gawdat Bahgat, director of Middle Eastern Studies at Indiana University, wrote that Israel thought they could normalize relations with the Arab world while forcing Palestinians to give up their fight for statehood.

Israel’s gamble paid off. Not only has Israel built more illegal settlements, but they have also conducted public and backdoor talks with Gulf nations such as Saudi Arabia, Bahrain and the United Arab Emirates.

Journalist Ramzy Baroud noted that Israel has always sought to sign peace deals with Arab countries to end its regional isolation, rather than genuinely discuss a peace settlement with Palestinians. That strategy, he said, has been the cornerstone of Israel’s foreign policy since the Jewish state was established.

First came the peace treaty with Egypt on 26 March 1979. Egypt’s President Anwar al-Sadat was assassinated by the Egyptian Islamic Jihad two years later for signing the treaty. Then came the peace agreement with Jordan, which Israel and King Hussein signed on 23 October 1994.

Today, normalizing diplomatic ties between Saudi Arabia and Israel looks imminent. The kingdom’s main motivation for doing so is to create a formidable alliance against Iran, which both countries consider their arch nemesis.

Yaacov Nigel, the former security advisor to Israeli Prime Minister Benjamin Netanyahu, told The Telegraph, a British daily, that Saudi Arabia is willing to sign off on any deal between Israel and Palestine, regardless of how unfavourable it might be for the latter.

He is, however, sceptical about whether Saudi Arabia has enough leverage to force the PA to accept a peace deal. Palestinian officials have stated that they would resist any pressure from Riyadh to accept a deal that deviates from the terms of the API.

Mahmoud Abbas, the Palestinian president, did just that when he visited MBS in December 2017. The crown prince reportedly told Abbas to accept an agreement that was worse than all the proposals that the United States (US), Israel’s closest ally, had tried to broker in the past.

Palestinian, Arab and European officials all told the New York Times that MBS proposed a peace settlement that would see Palestinians exercise limited control over non-contiguous areas of the West Bank.

Palestinians would also be denied East Jerusalem as its capital, while all illegal Israeli settlements would remain. Palestinian refugees in surrounding Arab countries would not be entitled to return to their homes. When asked if Saudi Arabia would indeed put forth the plan, officials in the kingdom refused to comment.

This is not the first time, of course, that Palestinians have been pressured to accept a raw deal. Since Palestinians fled or were expelled from their homeland in 1948, Israel has never entertained the idea of conceding full sovereignty to them.

“After the Oslo Accords were signed, (Israeli President) Yitzhak Rabin – touted as the great peacemaker – made it clear that whatever agreement was reached with the Palestinians, it would not be a sovereign Palestinian state and that Israel would keep security control,” explained Nadia Hijab.

The API was therefore the most reasonable offer presented to Palestinians in recent years, even though it limited the right of return for Palestinian refugees. Abbas often referred to the API as the best framework to ensure that a just peace is reached.

But with MBS now inching closer to Israel’s side, the latter is less inclined to accept a peace settlement than arguably any time in recent memory.

The US, after all, still provides Israel with more than $3 billion annually in military aid, while illegal settlements continue to expand without repercussions from the international community. The US also moved its embassy to Jerusalem on 14 May 2018, the same day that the Israeli military shot and killed at least 60 non-violent protestors in Gaza.

All these moves have killed the API. 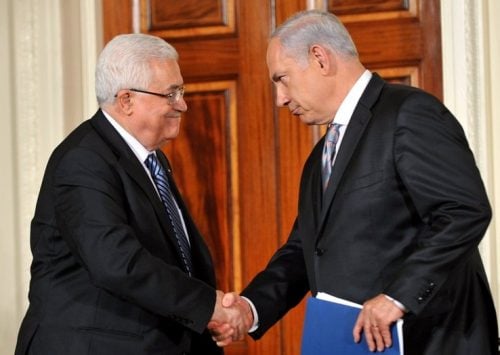