In an op-ed in The Jerusalem Post, David M. Weinberg, vice president of and a senior research fellow at the Jerusalem Institute for Strategic Studies (JISS) and Israel office director of Canada’s Centre for Israel and Jewish Affairs (CIJA), argued that ‘building 50,000 homes on Jerusalem’s eastern edge is critical for the future of the city and for Israel’s security’. Apart from the fact that this is illegal under international law, the veracity of his statement is questionable. In December 2017, the Israeli think tank Molad showed that the settlements not only do little to protect Israelis but put the country’s national security under heavy pressure. The scattering of Israeli citizens across the West Bank hinders the work of security forces, makes huge demands on the defence budget and complicates the work of the army because there are longer clear lines of defence.

According to Weinberg, the argument about bifurcation of the West Bank is a ‘red herring’, since any arrangement in E1 would involve ‘bypasses, underpasses, detour roads and shared spaces’, he argued. ‘Outrageously’, he continued, ‘the EU is even funding the establishment of unauthorized Palestinian and Bedouin settlements in E1, to create “facts on the ground” and prevent Israeli development in this zone.’

The alleged illegality of the structures that are to be demolished is an argument that is often heard whenever the topic of Israeli demolitions is discussed. Is the EU really funding illegal structures? Of course not. It is the Israeli development in this area that would be illegal under international law.

The claim that the Bedouins have built illegally on state lands since the 1950s also ignores the fact that the land is owned by Palestinians in Anata, a town in the central West Bank. According to Angela Godfrey-Goldstein, a British-Israeli activist who has been fighting for the Bedouins for over 20 years, the Bedouin residents of Khan al-Ahmar, refugees from the Negev desert in 1951, possess a lease from those Palestinian landowners. 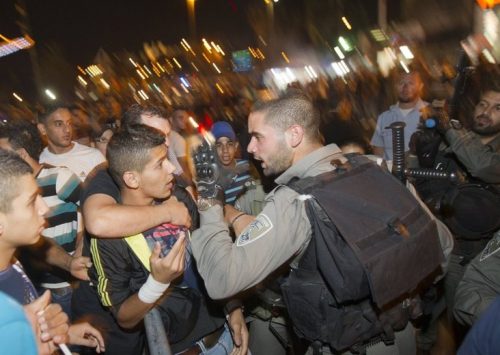 Activists: Bedouins in West Bank Being Forcibly Displaced
Some of the Bedouin children will be forced to live in a semi-urban environment next to a garbage dump, without their an...