On 16 January 2014, Crown Prince Sheikh Salman bin Hamad Al Khalifa,  the first deputy prime minister of the kingdom of Bahrain and deputy supreme commander of the Bahrain Defense Forces, met with a delegation from al-Wefaq (the Shiite opposition) headed by the Shiite cleric Ali Salman. This meeting was considered by international circles an “activation of the political dialogue process “ to solve the three-year-old political crisis in Bahrain, which ended officially eight days before the opposition suspended its participation in September 2013.

This call for dialogue, which was followed by several statements by the Royal Palace, laid the foundations for future dialogue, amid a tense security situation. The Shiite-led opposition, which claims to represent the Shiite majority in Bahrain, has continually demanded that a positive atmosphere be created for any dialogue, including the release of prisoners of conscience and the halting of trials and security raids and restrictions on the freedom of speech. The representatives of al-Fateh have, for their part, demanded that violence by the opposition be stopped.

Two weeks after this call for dialogue, the major administrative court issued a ruling dissolving the Shiite-led Scholars Council and ordered the liquidation of its assets . The council includes several prominent Shiite scholars who support the opposition. The court ruling came against the backdrop of a lawsuit filed by the Minister of Justice and Islamic Affairs and Endowments. The members of the council have been accused of exploiting it in order to conduct political activities under the cover of religious sectarianism. The opposition described the decision as interfering in the affairs of religion. 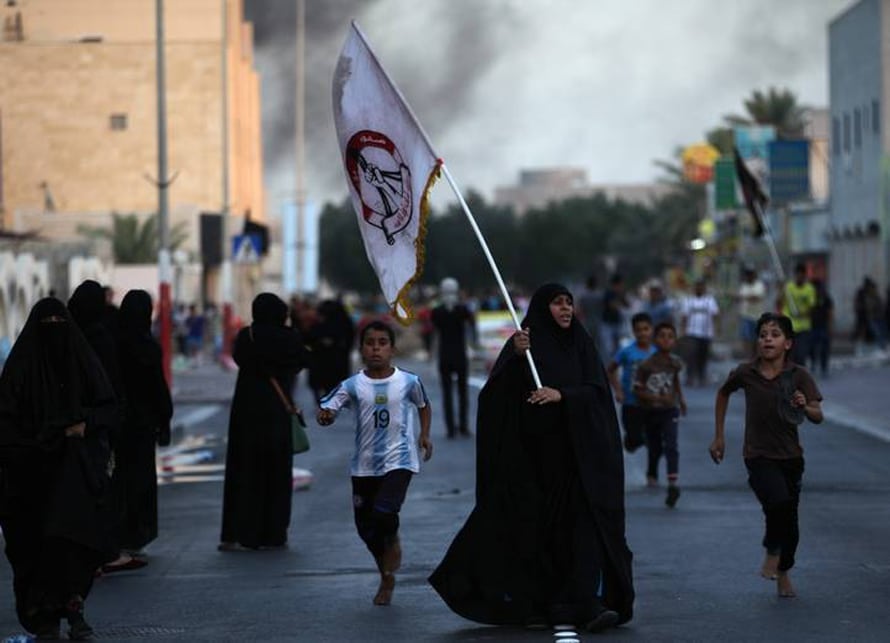 In April, Bahraini authorities deported the Shiite cleric Hussein al-Najati (the Bahraini representative of Iraq’s most powerful Shiite figure) to Beirut, after they had stripped the top Shiite cleric and 30 other citizens of their Bahraini citizenship in December 2012. In the meantime, violent protests by Shiite protesters have continued. The protests have remained small, relative to the demonstrations in February/March 2011, which were crushed by security forces of the Sunni monarchy. Some opposition groups have become radicalized in reaction to the deteriorating human-rights situation and have demanded the overthrow of the monarchy. Mainstream al-Wefaq, however, maintains that it wants reforms to bring about a constitutional monarchy. Authorities accuse the opposition of being in the pay of Iran, an assertion denied by both Iran and the opposition groups. The government and mainly Sunni pro-government groups accuse the opposition of inciting violence and terrorism.

Acts of violence and retaliation did not end after the government’s call for dialogue. The government-run institutions and pro-government parties considered the violence provoked by extremist opposition-inspired groups as an unmistakable indication of the lack of willingness of the latter to take part in a dialogue. On the other hand, the opposition considered excessive use of force by security forces the main reason for the deterioration in human rights and an indication of the lack of a serious will by the government to engage in dialogue.

In the meantime, a technical delegation of the Office of the High Commissioner for Human Rights in Geneva completed its visit to Bahrain. During its two-month visit, the delegation, in collaboration with the government and civil-society institutions, set up a program to meet the challenges of human rights.

In June 2014, 46 nations published, in the Human Rights Council, a joint statement on Bahrain. The statement welcomed some positive steps in Bahrain, among them the establishment of a prisoner’s-rights commission and the visit of the technical delegation, but the human-rights situation remained of serious concern: “We are concerned about the increases in long sentences for exercising rights to freedom of peaceful assembly and of association and the lack of sufficient guarantee of fair trial. We are concerned about the repression of demonstrations.”

In the meantime, the Bahraini economy has been affected in the last three years. The negative effect on the economy began with the global economic crisis that hit the financial sector and has included the political crisis in the kingdom since the outbreak of the protest movement in February 2011. Although the rate of economic growth in the kingdom has declined significantly, the overall economy has not yet suffered catastrophic consequences, as the rise in global oil prices has reduced the impact of the financial crisis and its effect on national revenues. But the steady growth in spending, public debt, and the nearly total dependence on oil revenues—Bahraini oil and gas production accounts for more than 70 percent of GDP—could set the alarm bells ringing for a possible doubling of economic and financial risk in the coming years. 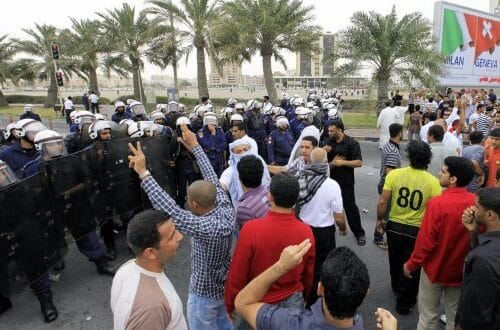