Even in a region known for autocratic governments, the Al Khalifa regime of Bahrain has long been notorious for its particularly repressive character. One explanation for this is that the family came to rule Bahrain through conquest. When they arrived in the second half of the 18th century, the archipelago was inhabited primarily by indigenous Shiite Arabs (Baharina or Baharna). The Sunni Al Khalifa stayed largely aloof from the Baharina while establishing their rule, relying instead on the support of the other Sunni Utub tribes with whom they had originally migrated from Kuwait. They also counted on the support of the urban Najdis (Sunni non-tribal traders from central Arabia, who had settled in the coastal towns of Bahrain at the same time as the Utub had arrived, or shortly afterwards). From the start, a political dialogue between the emerging Sunni urban ruling class and the subordinate Shiite Baharna of Bahrain was thus almost completely absent.

A second explanation can be found in the unusual ecology of the archipelagol . The larger islands of the archipelago have, until recently, been relatively verdant. This made settled agriculture, mostly date-farming, possible, which in turn facilitated the establishment of a quasi-centralized feudal rule that was almost impossible in the drier, more pastoralist regions, such as Qatar. Each new paramount chief of the Al Khalifa distributed the existing date plantations and manorial rights among favourite or powerful family members as personal fiefs. The rural Baharna continued to work the land, while the Al Khalifa landholders reaped the financial benefits of the plantations. The latter’s authority was highlighted by their armed black slave bodyguards. The division between rulers and ruled was made wider by the feudal system that prevailed on the islands until well into colonial times.

A third explanation can be found in the British colonial administration. The local power of the Al Khalifa became increasingly concentrated in the hands of one or more leading sheikhs during the British-Indian military and economic domination of the Gulf. British-Indian warships had established a Pax Britannica in the early 19th century. British-Indian political diplomats laid a plethora of treaties before the more powerful sheikhs of the Gulf, an important by-product of which was the greatly enhanced status of the latter in the eyes of their peers and subjects. Backed by official British recognition, the chiefs in question were able to raise their local position from tribal primus inter pares into that of undisputed ‘ruler’ of a certain, often undefined and always undemarcated, piece of territory. Because of their special interest in the strategically located Bahrain islands, the British promoted centralized rule there more than elsewhere in the Gulf. The British advisors to the Al Khalifa ruler, who created the country’s first national security force and intelligence system, did not tolerate political dissent. Dissidents were deported to India and, after India’s independence in 1947, to Napoleon’s place of exile, the island of St Helena.

The Butcher of Bahrain

The British colonial custom of deporting ‘native’ dissenters was continued by the Al Khalifa after Bahrain’s independence, in 1971. Banishment as a political punishment was only recently abolished, under the country’s 2002 Constitution. Two years earlier another symbol of colonial repression was finally effaced, when Ian Stuart Henderson, the last British security official in Bahrain, left the country. Henderson was originally employed by the Al Khalifa in 1965 to set up a special police division. At the apogee of his power he headed three different internal security directorates and was one of the most powerful – and feared – men in the country. After independence his resignation was one of the key demands of the opposition he had been hired to render impotent and whose members he allegedly tortured personally. ‘The Butcher of Bahrain’ has never been brought to court, in Britain or in Bahrain. Henderson was honoured with the title ‘Commander of the British Empire’ by Queen Elizabeth II in 1986 and is a reminder of British involvement, official and unofficial, in the creation of an autocratic and repressive Bahraini state. 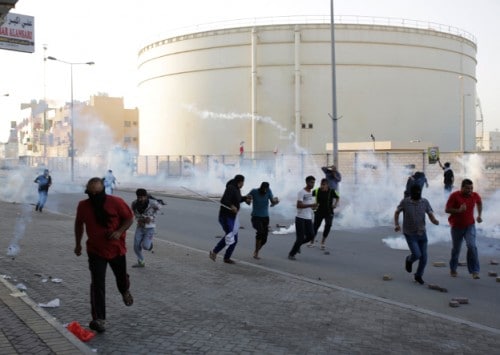 This Summer, No Respite for Bahrain’s Heated Politics
A court in Bahrain dissolved the main Shia opposition party al-Wefaq in July 2016. The problem is a straightforward one:...