Fanack Home / Bahrain / Past to Present / Bahrain and Israel: A Marriage of Convenience

Bahrain and Israel: A Marriage of Convenience

Analysts and political dissenters suspect that Bahrain is inching closer to normalizing ties with Israel, thanks to pressure from its powerful allies. On 11 May 2017, the first Israeli official was invited to Bahrain’s capital Manama as part of FIFA’s 67th Congress. Then, in September 2017, the Bahraini King Hamad bin Isa al-Khalifa denounced the global Boycott, Divestment and Sanctions (BDS) movement that penalizes Israel for occupying Palestinian territory.

Jawaad Fairooz, a human rights activist and former MP for Bahrain’s now banned al-Wefaq Party, speculates that the recent overtures towards Israel are part of a wider regional plan masterminded by Saudi Arabia and the United Arab Emirates (UAE).

“The Trump administration sees a good opportunity to push the UAE, Bahrain and Saudi Arabia to normalize ties with Israel in exchange for expediting arms [sales] and guaranteeing support,” he told Fanack Chronicle. “Saudi Arabia and the UAE have been gradually preparing the scene for normalization, and I think after Bahrain establishes ties, they will follow.”

A Western diplomat in Bahrain told Middle East Eye that official ties could be established as early as next year. If that happens, the Gulf Cooperation Council (GCC) could benefit from Israel’s superior military and security knowledge. Israel exports some of the most sophisticated surveillance programmes in the world, which Bahrain’s ruling family might want to obtain to hunt down activists.

King Hamad has clamped down on mostly Shiite dissent since peaceful protests erupted in February 2011. The brutality intensified last year 2016, when death sentences were handed out and political detainees were tortured until they confessed to crimes they did not commit. Other dissenters, like Fairooz, had their citizenship revoked before they were banished or deported from the country.

“Most of us are really afraid of what will happen. We are just waiting to be arrested,” one human rights defender told Amnesty International. “We know that’s the future. The [authorities] are targeting everyone now.”

Neither Britain’s ruling Conservative party nor Trump’s Republicans are applying any serious pressure on the ruling family to adopt reforms. Yet with the United States withdrawing from the region, Bahrain’s neighbours fear the expansion of Russian and Iranian power.

Israeli political figures share the same anxiety, compelling them to lobby for closer ties with the GCC, according to al-Monitor columnist Ben Caspit. Their main motive, he writes, is to create a regional alliance to offset Iran.

Bahrain must have different motives since it is already protected from Iran by the presence of the American Fifth Fleet and a UK navy base. Then again, the tiny Gulf country is assumed to have little autonomy from Saudi Arabia when it comes to foreign policy.

Nevertheless, Bahrain is promoting its relations with Israel under the banner of fostering ‘religious tolerance’. During an event in September 2017 at the unabashedly pro-Zionist Simon Wiesenthal Center in Los Angeles, Bahrain’s crown prince joined 400 representatives of various religious faiths. The Bahraini National Orchestra also played HaTikyah – the Zionist national anthem – which calls for everyone with Jewish ancestry to return to their homeland in the form of the state of Israel.

The prince was then given a tour of the Museum of Tolerance. The tour was led by Rabbi Marvin Hier, a cofounder of the centre. Hier recited the story of Anne Frank and hailed Bahrain for combatting religious extremism.

Bahrain, however, has shown little tolerance towards its own majority Shiite population. Even before the uprising, Shiites were sidelined economically and politically. In 2010, the monarchy even tried to tip the country’s demographic balance by naturalizing 100,000 Sunni men from Yemen, Syria, Jordan and Pakistan. These men were then given jobs in Bahrain’s frail security services, which then cracked down on peaceful demonstrations. As protests mushroomed, the ruling elite framed the uprising in sectarian terms, insisting that those who oppose them hold loyalties to Iran.

Joe Stork, deputy director of Human Rights Watch’s (HRW) Middle East and North Africa division, told the Los Angeles Times that there is a great deal of discrimination against Shiites in Bahrain. But he was quick to note that the “bigger issue is the zero tolerance for any kind of political dissent”.

Fairooz agreed, adding that the crown prince’s visit to the Museum of Tolerance was a cosmetic action to show the international community that Bahrain respects minorities. In 2011, the ruling family received praise for a similar action when it selected a Jewish woman, Houda Ezra Ebrahim Nonoo, as their ambassador to the US. All the while, Bahrain’s government was brutally repressing protestors.

These overtures towards Israel are now inciting a backlash from Bahrainis. Last August 2017, the foreign minister was denounced for tweeting his respects to former Israeli President Shimon Peres following his death. Peres is a despised figure in the Arab world for endorsing early settlement construction and ordering the attack of a United Nations base in Lebanon that killed 106 people in 1996.

The tweet received over a hundred likes. Yet despite significant discontent, one Western diplomat predicted that King Hamad will eventually pacify his people. Fairooz, meanwhile, said that he will not be appeased, nor will the hundreds of other political dissenters, such as those on trial or in prison, who worry that stronger relations with Israel will aid the kingdom in its clampdown. 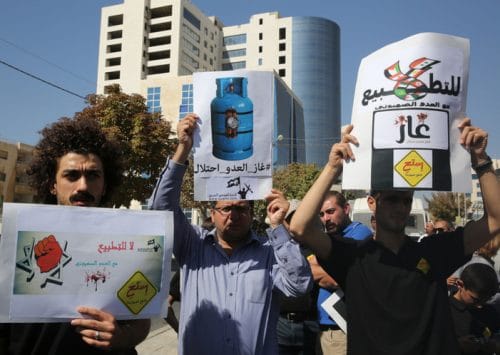 Is Normalizing Ties with Israel the Price for standing up to Iran?
Foremost among the consequences is a growing sense that the Saudis, along with the United Arab Emirates and Bahrain, are...