Fanack Home / Bahrain / Past to Present / Return to Repression

The government returned in 2004 to a policy of violent repression and intimidation. The regional insecurity that resulted from the US-led occupation of Iraq, the international ‘War on

Terror’, and the deteriorating situation in the Palestine reverberated in Bahrain. The growing popularity of Shiite Islamist politicians unsettled the government, particularly as Iraq succumbed to sectarian strife, then civil war. The new balance of power in the Gulf favoured Iran, a matter that troubled Saudi Arabia and its Western allies, who now turned a blind eye to the Bahraini government’s efforts to limit predominantly Shiite dissent, so the Bahraini government was free to reign in the increasingly vocal opposition and human-rights groups.

In April 2004, the chairman of the National Committee of Martyrs and Victims of Torture was arrested after human-rights activists staged a protest during Bahrain’s first Formula 1 race. In December Abdulhadi al-Khawaja, the executive director of the Bahrain Centre for Human Rights, was arrested by security forces and his centre disbanded. Earlier, al-Khawaja had called for the resignation of Prime Minister Khalifa bin Salman, who is widely accused of human-rights violations and corruption. The same year, nineteen members of the country’s main political societies, including the predominantly Shiite al-Wefaq, the Sunni nationalist al-Wasat (the Centre) and the leftist, secular National Jamiat al-Amal al-Watani al-Dimuqrati (National Democratic Action Society) – were brought to court for ‘undermining of the state’ by attempting to collect signatures opposing the amended Constitution. New legislation was introduced by the government to restrict the activities of political groups.

But social unrest continued, and the increasingly frequent confrontations between demonstrators and security forces reminded many of the violent 1990s. On 12 August 2006 King Hamad signed a highly controversial counter-terrorism law, which prohibited any act that could ‘damage national unity’ or ‘obstruct public authorities from performing their duties’. Allegations by international human-rights organizations of abuse and torture in jail increased, indicating a serious deterioration of the local humanitarian situation. This led the Bahraini government in November 2008 to warn local human-rights activists not to meet with foreign officials while abroad and discuss issues that could ‘weaken financial confidence in the state of Bahrain or diminish its stature’.

Meanwhile the parliamentary experiment continued. At the end of 2006 al-Wefaq chose to take part in the parliamentary elections. They won all seventeen (of the forty) seats they contested and became the largest group in the Council of Representatives. The Sunni Islamist Jamiat al-Asala al Islamiya (Society of Islamic Authenticity) and al-Menbar (The Tribune) also won all their contested seats, five and seven respectively. No secular representatives were chosen, but the independent Lateefa al-Gaood was the first Bahraini woman to win an (uncontested) seat. As usual, members of the Al Khalifa family kept their key government posts. No member of al-Wefaq was appointed to the cabinet, and Khalifa bin Salman remained Prime Minister. In the Council of Representatives, the opposition exercised its right to criticize the government’s ministers, but their influence on government policy remained minimal. With no substantial reform and a severe economic recession on the horizon, the resilience of Bahrain’s political regime was about to be seriously tested.[/two_third] 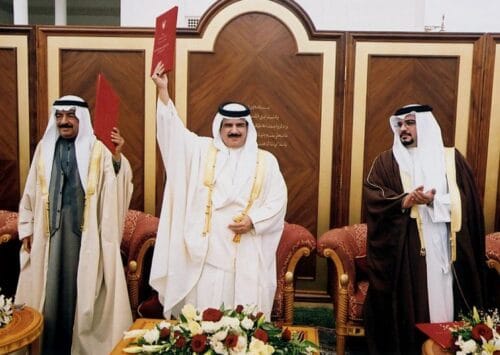 Towards Reform
In his National Day address of December 1999 King Hamad suddenly and surprisingly announced an ambitious programme of po...