Culture is [1] “a way of life that distinguishes every human group from another.” In line with that definition, human communities passed through various special and diverse cultures over time. Every era and every people had cultural specificities that reflect certain identities and highlight specific values. In modern ages, cultures’ specificity started to decline slowly. That came as a consequence of the direct communication between communities in a process commonly called “cultural fusion” [2]. Such as cultural state came as a result of modern colonialism’s emergence.

Today in the age of globalization, massive technological leaps (with its media and communication products) comprised the cornerstone of “electronic culture” that distinguishes this age. Perhaps this culture retains some of the characteristics of modern ages manifested in “cultural fusion”. However, this fusion turned into cultural assimilations and stereotyping that promote values of individualism, consumerism and utilitarianism.

The “cultural fusion” depends heavily on two conditions: having long time and direct contact. Nevertheless, “electronic culture” was able to null these two conditions. In fact, that came true through technology. Here, we need to know that cultural assimilation and stereotyping occur at a crude and rapid pace, without any direct contact between people.

Children and teenagers are the most targeted groups by “electronic culture” in the age of globalization. According to the “Children in a Digital World” report issued by UNICEF in 2017, children and teenagers under 18 years old comprise two thirds of internet users in the globe [3]. Targeting this age group functionally differs from targeting any other group. For instance, and regardless that “electronic culture” promotes individualism at the expense of “ideals”, this culture has a direct function for age groups above 25 years. This function might be linked to services or marketing, etc. On the other hand, this culture’s function has only a structuring role when it comes to children and teenagers. It builds and forms children’s character in a manner consistent with the present data and the future expectations. In other words, its danger precisely lies in this domain and in its true nature as an assimilating and stereotyping culture.

Now I return back to the negative influence of that culture on Arab children. We need to know that this influence is tremendous. In fact, we can safely say that we are two or three generations at most away from an almost complete disappearance of foundations and components of the Arab culture.

But before tackling this issue, we need to know that the objective of this article is not to count the dangers of “electronic culture” to children in the Arab world. This task can be accomplished by visiting educational websites that are full of detailed explanations on these negatives. Moreover, this article is not meant – and more importantly – to defend the Arab culture as “the culture of ideals that is attacked to be replaced with values of degradation and immorality…” Never! As mentioned above, we are facing a global issue. The main focus here is on the cultural specificity of a given nation as one of the manifestations of its identity and an important element of itself-balance. Anyway, every culture has its pros and cons, and Arab culture is no exception.

Let’s stop here to comprehend the reasons behind Arab children being majorly influenced by “electronic culture”, in a manner that might lead to the extinction of the Arab culture entirely. Actually, there are two main problems that branch out many other problems:

The first problem is that Arabs have an almost non-existent cultural influence. Arabs stopped cultural production many centuries ago. They still indulge themselves boringly in reminiscence of glories of the distant past. That comes while we notice that more than 400 million Arabs are unable today to either produce a valuable research paper or to program a valuable smartphone application. Even in entertainment, Arabs’ creativity is falling to disappointing levels. In this regard, the U.S. News & World Report organization issued a report on the 10 most culturally influential countries in the world [4]. Unfortunately, not a single Arab country was ranked in the list. This has to been seen while knowing that the evaluation standards were very simple (they were status, entertainment, fashion, modernization, happiness and influential culture).

Undoubtfully, a nation without a cultural force that is at bar with other cultures – even at minimum level – cannot blame its children if they forsake their culture. At least, a nation needs to be equal with other cultures to ensure engaging in a mutual influence. This certainly clarifies how the electronic culture of the globalization era succeeded in capturing these children with no effort!

The second problem is that Arabs are apparently not at all up-to-date regarding this “electronic culture”. For instance, all cartoons that Arab children watch are products of other people’s cultures. All are about strange heroes (examples include Pokémon, TMNT and Teen Titans). Arabs cannot produce one Arab hero to present to their children! Even some Arab attempts to do so are frail ones and lack impact. These attempts are inspired by western culture and use western techniques as well (for instance, the Emirati cartoon “Mansour”).

The absence of an Arab hero is not something bad if it was only that. However, the problem is that this virtual hero vanishes in parallel with the shrinking educational role of family and school. In other words, the child’s “cultural inheritance” is completely cut off and replaced with the “electronic culture”. On the one hand, this electronic culture single-handedly presents malicious values that are very distant from valuable ethical values. On the other hand, it presents to this child – and others – a depiction of the Arab as an evil man longing to humiliate women and to shed blood. Ironically, the super hero must defeat him in the end. Therefore, Arab children are raised to be defeated unconsciously, so how can they belong to the culture that brought their defeat upon them?!

To sum it up, Arabs may protect their children from the negative sides of the “electronic culture”. They can do that like what happens in other societies. It is also true that Arabs can prevent their children from viewing sexual content by using some apps. They can protect them from being exploited or trafficked. However, they cannot completely protect them from the negative aspects of that electronic culture. They cannot stop that culture from building their children’s characters, forming their minds or stereotyping them in templates that are completely void of any valuable content. Putting an end to these negatives is only conditional on solving the causes of our absolute submission to this culture. Other than that, “extinction of Arab culture” is not pessimism or astrology. Rather, it is just a matter of time before it becomes a reality!

Culture
Over the centuries successive civilizations have left their mark on Anatolia. Turkey's impressive architecture, across t... 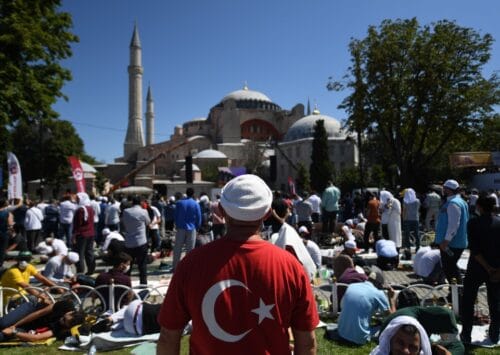 Population of Turkey
Fanack provides an overview of Turkey's population, including its ethnic and religious groups and socio-economic composi...