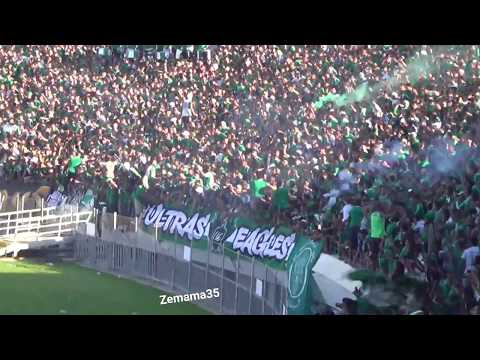 Morocco’s ‘ultras’ are fanatical football supporters. In recent years they have clashed with authorities, becoming a symbol of the marginalization of youths looking for opportunities in a country that provides few.

‘F’Bladi Delmouni’ (‘Oppressed in my country’) is a song created in March 2017 by the Gruppo Aquile (‘Eagles Group’) ultras who support the Raja Casablanca football club. Focusing more broadly on social issues, the group highlights the lack of government assistance for poor and marginalized communities. The song’s lyrics translate as: ‘In this country, we live in a dark cloud / We are just asking for social peace (…) / They drugged us with Ketama hashish / They left us like orphans / Waiting for the end of days’ punishment (…) / Talents have been destroyed by the drugs you provided them with / How do you expect them to shine? / You stole our country’s wealth / Sharing it with foreigners / Destroying a whole generation.’

Since September 2018, the ultras’ social discontent has turned into protests. Los Matadores, Tetouan football club’s ultras, protested about the death of Hayat Belkacem, a student killed by the navy on 25 September as she tried to cross the Mediterranean illegally to Spain. Her death coincided with a Tetouan-Kawkab game. A week later, on 30 September, during a game between Hassania from Agadir and Khouribga Olympic, supporters chanted unpatriotic songs.

“Through the ultras groups, the youth find a structure, a feeling of belonging and a way to exist in society that they don’t find in their daily life,” football journalist Farouk Abdou told Fanack. “Their claims come from the feeling of being marginalized, rejected, and the supporters’ songs allow them to express this.”

For political sciences expert Abderrahim Bourkia, the ultras have become a social movement. “Supporterism became in Morocco a place of expression of the socioeconomic exclusion of young people,” Bourkia told Fanack. “It is a means of expression, protest and above all the true framework to construct an identity, showing a desire by young people to be seen, to exist and to be recognized in a society from which they feel rather excluded, without going through political parties or associations. The political and sports environment have become sensitive to the mobilization of the ultras, at least from the security angle, and the members of the groups who define themselves socially as supporters seize the rare opportunities available to them to make their voice heard.”

In 2016, ultras were banned from expressing their support through visible signs such as flags and banners, singing songs and performing any kind of choreography in the stands after a fight among fans of Raja Casablanca left at least two supporters dead. Ultras loudly protested this decision but without any luck until late 2017, when several boycott campaigns left stadiums deserted by the clubs’ biggest fans.

“Then dialogue started back up, the jailed group leaders were released and ultras reappeared in Moroccan stadiums,” Abdou said. “The interdiction softened and the ban was eventually lifted.” The journalist explained the situation by the fact that ultras, since their appearance in 2005 as groups of fans wanting to support their club with more intensity and creativity, have become an attraction in their own right.

“These groups are important because they bring fame to the club and fill up the stadium, but they have also become famous abroad due to their impressive visual displays, like a free advertisement for football clubs,” he added. “But from time to time the ultras’ pressure [on the clubs] for results can become negative, and the growing number of supporters, sometimes 50,000 people for a home game, creates the conditions for outbreaks of violence, with aggravating factors like knives, drug, the group effect etc.” However, Abdou noted that violence decreased in 2018, as ultras reigned in the youth gravitating to their groups.

Beyond the social role the ultras now play, their pull has another dimension, as Bourkia explained: “In the space of 90 minutes, they express the whole range of emotions that one can feel in a lifetime: joy, suffering, hatred, anguish, admiration, injustice.”

He prefers not to use the word ‘hooliganism’ to describe the violent acts committed by supporters, describing them instead as “an aspect of urban violence gravitating around the football show”; a way to point out that some supporters are well off whereas ultras are usually not. Through the cohesion and loyalty of their members, ultras have found a platform to voice the concerns of a marginalized generation with few prospects in Morocco.