The Egyptian parliament on 14 June 2017 approved the maritime demarcation agreement that will transfer the Red Sea islands Tiran and Sanafir to Saudi Arabia, defying a Supreme Administrative Court ruling that annulled the agreement in January 2017.

The vote came swiftly, after the parliament’s Legislative and Constitutional Committee and the Defence and National Security Committee approved the deal and referred it to a general ballot. Around 400 MPs voted in favour of the deal and 40 against it.

The vote was conducted by a show of hands, rather than a roll call that would have recorded the votes, reportedly to ensure the anonymity of MPs in the voting process.

Preparations to hand over the islands have already started. The Egyptian authorities banned fishing and diving near Tiran, which is located close to tourist resorts along the Red Sea in South Sinai. MPs from South Sinai publicly opposed the deal.

The deal has sparked widespread criticism. Egypt’s polling centre, Baseera, not commonly known for its critical surveys, found that 47 per cent of Egyptians believe that the islands are part of Egypt, versus 11 per cent who believe they belong to Saudi Arabia. In April 2016, when the agreement was first announced, Baseera found that 30 per cent believed the islands are Egyptian, and 23 per cent Saudi.

On the day of the vote, a small protest broke out in front of the Press Syndicate in central Cairo. It was quickly dispersed by security forces. Egyptian journalist Amira el-Fekki tweeted from the scene that protesters chanted “bread, freedom, the islands are Egyptian”, in a reference to the 2011 revolutionary demands.

Eight protesters were arrested; the total number of arrests in the week of the parliamentary vote reached 112, of which 37 have been released, according to the activist campaign Freedom of the Brave. Most of those arrested are members of opposition parties, journalists or activists.

Opposition to the deal runs deeper than the political sphere, however. In June, 180 filmmakers signed a petition stating that Tiran and Sanafir are an ‘integral part of the territory of the Egyptian state’.

Soon after the deal was announced, lawyer and former presidential candidate Khaled Ali filed a lawsuit on behalf of a group of citizens who opposed the agreement. In January 2017, the Supreme Administrative Court issued a final ruling in the case, annulling the deal and thus ensuring that Tiran and Sanafir would remain Egyptian.

In April 2017, another court, the Cairo Court of Urgent Matters, overturned the ruling. Lawyer Malek Adly, part of Ali’s legal team, told Fanack previously that this is a “low-profile” court which, according to the constitution, has no jurisdiction over the Supreme Administrative Court. In the week after the parliamentary approval, the Supreme Administrative Court ruled that the Court of Urgent Matters indeed had no jurisdiction over the matter and confirmed its earlier annulment of the deal.

Ali also filed a lawsuit to suspend parliament. He argued that it has no say in the case after the final ruling of the Supreme Administrative Court, Egypt’s highest court, and putting the sovereignty of Tiran and Sanafir to a vote represents a threat to Egypt’s national security and territorial integrity.

Ali is at risk of being prosecuted himself. He was briefly detained in May 2017 and faces charges of making ‘indecent hand gestures’ in public. It has been suggested that the case is an attempt to prevent Ali from running for president again in 2018, which he has said he is considering.

In a reaction to the parliamentary approval on Facebook, Ali expressed his disbelief that MPs could decide on the matter after three days of debate, when it took a court ten months of hearing experts and examining documents. He vowed not to give up his fight for the islands, hinting that there are still ways to prevent the transfer.

Ali’s legal battle looks set to continue. The Supreme Constitutional Court is due to decide on the constitutionality of the island agreement on 30 July 2017. The court temporarily halted all other court rulings on the transfer until it issues a final ruling. If this court rules in favour of the Supreme Administrative Court, and hence against the transfer of the islands to Saudi Arabia, a confrontation between the government and judiciary will only become more likely.

There are already signs this may be the case. A panel advising the Supreme Constitutional Court has expressed its support for the Administrative Court’s decision.

Amid Egypt’s myriad courts and, as the Associated Press put it, ‘sometimes murky power structure’, it is hard to predict how such a confrontation would play out.

Tiran and Sanafir are strategically located in the Strait of Tiran, which connects the Gulf of Aqaba with the Red Sea. Egypt’s closure of the Strait of Tiran to Israeli shipping in 1967, which instituted an effective blockade of the Israeli port city of Eilat, was reason enough for Israel to start the Six Day War.

Giving away two islands in Sinai is especially sensitive given the wars Egypt has fought with Israel in the peninsula in 1956, 1967 and 1973. In Egypt’s ‘hyper-nationalistic’ educational curricula, the fights over Sinai are key to the country’s sense of national pride and sacrifice for ‘the land’. For both staunch supporters of President Abdel Fattah al-Sisi and completely a-political Egyptians, giving away the land is therefore a deeply uncomfortable issue.

The frustration of the island deal by the Egyptian opposition has impacted on Saudi-Egyptian relations. Since the overthrow of Mohamed Morsi’s Muslim Brotherhood government in 2013, Egypt has received billions in aid from Saudi Arabia, an important lifeline after years of turmoil and economic stagnation. A new five-year petroleum supply deal was sealed in March 2016, supported by a favourable loan from the Saudi state fund.

However, in October 2017, the petroleum shipments were suddenly suspended and relations between the countries cooled, reportedly due, at least in part, to the delayed island deal. Petroleum shipments resumed in March 2017, and at the Arab League summit in Jordan the same month, al-Sisi and Saudi Arabia’s King Salman eagerly showcased their friendship in front of the media.

Meanwhile, Saudi Arabia and Egypt are making progress with a project that will link the two countries’ electricity grids via a marine cable underneath the Gulf of Aqaba.

Al-Sisi has manoeuvred himself into a precarious position. In order to please his powerful neighbour and financial backer, he needs to complete the island deal, but by doing so he risks public opposition and a defiant judiciary at home. 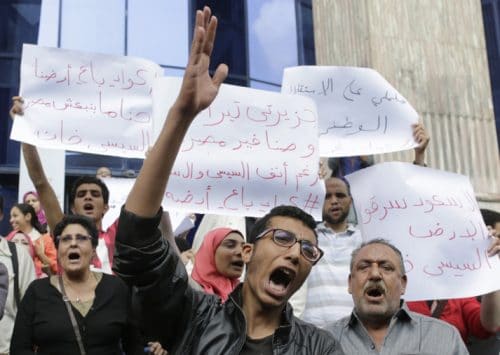