However, in early April 2017, the Cairo Court of Urgent Matters overturned the ruling. Khaled Ali, a presidential candidate in 2012 and one of the rights lawyers opposed to the transfer of the islands, said that his team had taken legal action to appeal the decision, on the basis that the Court of Urgent Matters does not have the authority to make such a decision.

Ali told the news website Mada Masr: “The rulings of the Supreme Administrative Court are final and binding and cannot be suspended by any other court.” He added that the Court of Urgent Matters ruling was “created” in order to “give parliament the judicial cover to justify discussing the agreement.”

Malek Adly, part of Ali’s legal team, told Fanack that the Court of Urgent Matters is a “low-profile court” that only has jurisdiction over certain urgent issues, such as “removing something from the street” or “destroying a building on the brink of collapse”.

He repeated that overturning the Supreme Administrative Court ruling violates the constitution, describing it as “a kind of crime”. He referred to Article 190 of the constitution, which states that ‘the State Council is an autonomous judicial body that is exclusively competent to adjudicate in administrative disputes, disciplinary cases and appeals, and disputes pertaining to its decisions’. According to Adly, the Supreme Judicial Council should intervene and hold the judge that issued the ruling to account.

Asked how the Court of Urgent Matters became involved in the case in the first place, Adly suggested that the security apparatus had a level of control over these kinds of courts.

The announcement by President Abdel Fattah al-Sisi in April 2016 that Egypt would hand over the two islands in a strategic location at the mouth of the Gulf of Aqaba sparked widespread protests. Despite al-Sisi’s effective silencing of any oppositional voices, the issue of Egyptian land is particularly sensitive. Under the Egyptian constitution, neither the government nor parliament are authorized to relinquish Egyptian land to another state, and any such agreement would have to be ratified by popular referendum.

Egyptian officials say that the islands were originally Saudi but had been entrusted to Egypt for protection during the wars with Israel in the 1950s. As such, Egypt would be restoring to Saudi Arabia territory that already belongs to it. However, activists argue that the islands are Egyptian, according to an agreement made with the Ottoman Empire in 1906, before Saudi Arabia even existed.

Meanwhile, the deal has become a political as well as a legal matter. In 2016, the cabinet approved the deal and referred it to parliament for ratification, despite objections from certain members of parliament that authority on this matter lies outside parliament’s scope.

On 10 April 2017, parliamentary speaker Ali Abdel-Aal referred the deal to the parliament’s legislative and constitutional committee for discussion. Ali’s team has also filed a lawsuit against the parliament. Adly explained that when the Supreme Administrative Court ruled against the deal, the parliament had no further right to decide on it. The next hearing in the case will be in June, 2017.

The delay in the transfer served to deepen the rift between Cairo and Riyadh. Following the ouster of the Muslim Brotherhood government in a popularly backed coup in 2013, Saudi Arabia spent billions of dollars propping up Egypt’s ailing economy. As a sign of its displeasure, Riyadh in October 2016 halted monthly shipments of petroleum products due to be provided to Cairo on easy terms for five years. 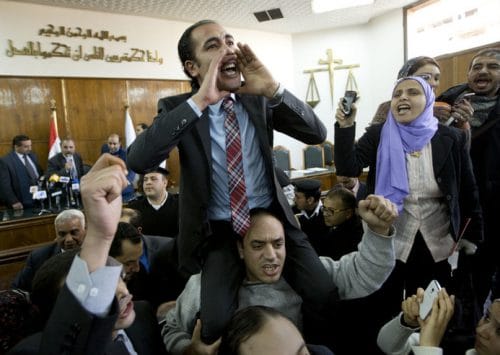 Disputed Islands Still Hot Topic
The island controversy became another source of tension between Egypt and Saudi Arabia, whose relations have deteriorate...