Fanack Home / Egypt / History of Egypt from Past to Present / In Egypt, the Space for Dissent Has Shrunk to Zero

In Egypt, the Space for Dissent Has Shrunk to Zero

Dozens of regime critics and human rights activists in Egypt have been arrested in recent months, as the state seeks to silence voices that could oppose constitutional amendments to keep President Abdel Fattah al-Sisi in office beyond a two-term limit.

There was good news for one detainee, however. On 1 December, blogger Wael Abbas heard that the Giza Criminal Court had ordered his conditional release. He has been held since 23 May on charges of spreading false news and joining a terrorist organization. Two days later, the court rejected an appeal by the State Security Prosecution, upholding the release.

“I think Abbas will be released today or tomorrow. He is in the police station going through the procedures for his release,” lawyer Ragia Omran told Fanack on 7 December.

Two days later, there was still no news of his release. “It usually takes several days. For Haitham Mohamedeen [another arrested activist], it took almost two weeks,” Omran said.

A number of prominent lawyers and journalists stand accused in the same case (Case 441/2018). PhD student Walid al-Shobaky and videographer Moamen Hassan were released. Several others, including journalists Mostafa al-Asar and Hassan el-Banna and lawyer Ezzat Ghoneim, remain in prison.

Ghoneim, head of the Egyptian Coordination for Rights and Freedoms and involved in several cases of forced disappearances, was arrested in March. The court ordered his release pending investigations on 4 September, but he disappeared after he was reportedly released on 14 September. Only on 21 October was an arrest warrant issued against him, and he appeared to be held in Cairo’s Tora Prison.

Whether one is released pending an investigation seems rather arbitrary. “It depends on the judge; it is a manner of luck,” Omran said. Pre-trial detentions have to be renewed every 15 or 45 days, and some judges grant a conditional release while others do not.

The past year has seen numerous arrests of Egyptians who in one way or another criticized the state. Abbas has been documenting police violence and corruption on his popular blog since the 25 January Revolution in 2011. Al-Shobaky researches Egypt’s judicial system. They were both part of a string of arrests in May, which also included comedian Shady Abu Zeid.

Abu Zeid became a person of interest to the security apparatus after a ‘condom prank’ in 2016 and has kept a low profile since. He stands accused in another state security case (Case 621/2018), which includes blogger Mohamed Ibrahim, activist Shady al-Ghazaly Harb, April 6 Youth Movement member Sherif el-Rouby and Amal Fathy, of spreading false news and joining a terrorist organization.

Rights lawyer Azza Soliman, who regularly visits Abu Zeid in prison, sees the arrests as a way to discipline people. “Any person who joined in the revolution, they want to discipline,” she told press agency IPS in June.

Fathy was arrested in May after she posted a video lambasting the police for failing to protect women from sexual harassment. Her husband, Mohamed Lofty, who heads the NGO Egyptian Commission for Rights and Freedoms, believes Fathy’s arrest was partly related to his human rights advocacy work, he previously told Fanack. Five months later, in a separate case, she was sentenced to two years in prison by a misdemeanour court for spreading false news and possessing indecent material.

Another wave of arrests of outspoken critics occurred in August, on the third day of the Sacrifice Feast. Among those arrested was politician and former diplomat Masoom Marzouk, who had called for a referendum on al-Sisi’s rule.

The next round of arrests happened on 1 November, when 19 lawyers and activists were arrested in house raids, according to Amnesty International. International watchdog Human Rights Watch put the total number of political arrests from late October to mid-November at 40, saying that many of those arrested were people who supported the families of detainees. Among them were 11 members of the Egyptian Coordination of Rights and Freedoms that consequently suspended its activities.

Several rights lawyers told Fanack that the arrests are related to an upcoming amendment of the constitution, which would allow al-Sisi to remain in office beyond a two-term presidential limit. Potential opposition to such a move is preventively being silenced, they say.

The constitution, passed in 2014, states that a president can serve a maximum of two four-year terms. Last August, a parliamentary lobby for constitutional change started to gain momentum, and a Cairo court scheduled a hearing for 23 December on a petition demanding this change.

Sources told Fanack that they expect the process of amending the constitution to start in early 2019. Local media quoted sources with similar views.

The ability of courts to challenge the state became evident in April 2016, when a group of lawyers led by Khaled Ali filed a lawsuit opposing the handover of two Red Sea islands to Saudi Arabia. Court orders overruled parliament and delayed the transfer for well over year, although it was eventually pushed through in June 2017.

“I think [the arrests] are for constitutional amendments,” Omran agreed. “They hold people that may object.”

Even when prisoners are released, the authorities pose restrictions on them. “Abbas will have to report twice a week at the police station,” Omran said.

As researcher Michele Dunne wrote in an analysis for the Carnegie Endowment, the al-Sisi regime has succeeded in rebuilding the wall of fear separating citizens from the state. The space for dissent in Egypt has shrunk to zero. Many of those arrested were not politically active, or at least not recently, but voiced criticism on social media or had even quit activism altogether.

In the presidential elections in March 2018, al-Sisi used intimidation and arrests to dissuade possible contenders from running, leaving his re-election completely unchallenged. Now he wants to ensure that no one will stand in the way of his bid for a ‘presidency-for-life’. 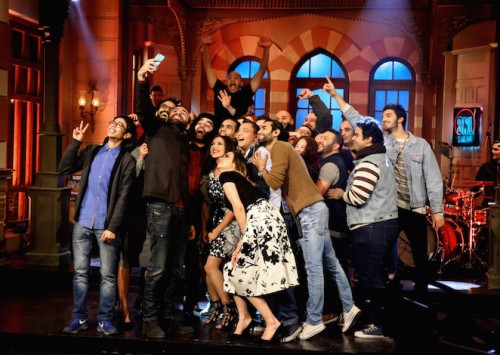 In Egypt, Political Satire Pushed to the Margins
Amid the ongoing crackdown on any voices of dissent, political satire is seen as a threat to the authority and legitimac...