Fanack Home / Egypt / History of Egypt from Past to Present / Could Improved Egypt-Hamas Relations Halt Spread of Jihadi-Salafists in Sinai?

Could Improved Egypt-Hamas Relations Halt Spread of Jihadi-Salafists in Sinai?

Jihadist-Salafism is by no means new. Its origins can be traced to the Muslim Brotherhood, which was founded in Egypt in 1928, with the goal of establishing an Islamic state. It was also the Muslim Brotherhood that spawned the writer Said Qutb, who provided the movement’s intellectual underpinnings. His ideas were taken a step further by Abdel Salam Faraj, who called for jihad against Muslim rulers who do not implement sharia law. His book, The Neglected Duty, provides a rationale for fighting ‘the near enemy’ of the Arab regimes rather than focusing on ‘the far enemy’ of the West, the United States and Israel.

As a consequence, the Muslim Brotherhood was key in the assassination of former Egyptian President Anwar Sadat in 1981. Moreover, jihadist-Salafism spread into Afghanistan, where al-Qaeda was established following the merger of Egyptian jihadi thought and Wahhabi (Saudi) Salafism. Al-Qaeda adopted a large number of ‘jihadist’ operations.
Most of the leaders of Egypt’s jihadi groups came out of the Muslim Brotherhood, which they broke away from following their release from prison in the 1970s. They established a movement that adopts violence as a means, does not recognize national borders, calls for the return to ‘pure and true’ Islam through the application of strict sharia law and the creation of a single Islamic state under one khalifa or leader. The first of these groups was Takfir wal Hijra, which began to expand in its traditional strongholds in Upper Egypt.

During President Mubarak’s rule (1981-2011), membership of the movement declined significantly due to a government crackdown that forced many members to flee abroad. In the 1980s, Salafi jihadists preferred to travel to Afghanistan to fight against the Soviet invasion than confront the security forces at home. The security forces also turned a blind eye to these departing Salafis, hoping that most of them would die in the conflict. However, those who returned faced an even greater security crackdown.

Salafist groups regained their strength during the 2011 uprising, and in the security chaos that ensued were able to expand in new areas, particularly Sinai Peninsula.

After President Mubarak was overthrown and the Muslim Brotherhood under Mohamed Morsi won the 2012 elections, Salafist and pro-jihadist groups began to reorganize themselves to attract new members. However, following the ouster of President Morsi a year later, the Muslim Brotherhood and other Islamist movements once again found themselves persecuted. In retaliation, a number of jihadi movements were established that adopted violence as an essential means to confront the ruling regime. Among the groups based in Sinai are Ansar Bayt al-Maqdis (Champions of Jerusalem), Ajnad Misr (Soldiers of Egypt), Jihadi Shura Council, the Mujahideen in Aknaf of Jerusalem, the Mujahideen Shura Council and Egyptian Islamic Jihad.

Of these, Ansar Bayt al-Maqdis, which has an estimated 1,000 fighters, is considered to be the most important and dangerous. The group was initially interested in attacking Israeli targets and was particularly active on the border between Egypt and Gaza, where it periodically bombed the Egyptian gas export pipeline to Israel.

As a result of the violent end to the Rabaa protest in August 2013, in which up to 1,000 Muslim Brotherhood supporters were killed by army and security forces, Ansar Bayt al-Maqdis declared the army and the police to be apostates that should be eliminated. The same month, during Ramadan, Ansar Bayt al-Maqdis militants killed 25 army conscripts and injured two others near the border with Israel. The group was also behind the assassination of the former Interior Minister Mohamed Ibrahim in September 2013, when his motorcade was targeted in Cairo, and the bombing of al-Dakahlia Security Directorate in December 2013, in which 16 security officers were killed. In addition, the group was charged with the assassination of the public prosecutor, Hisham Barakat, in June 2015. In March 2017, the organization claimed responsibility for the deaths of 30 Egyptian soldiers following an attack by the Egyptian army in al-Arish, the capital of North Sinai.

Ansar Bayt al-Maqdis pledged allegiance to the Islamic State (ISIS) and its leader, Abu Bakr al-Baghdadi, on 13 November 2014 and changed its name to Sinai Province. It also shifted its focus from fighting Israel to fighting the Egyptian army. More recently, the group has been at odds with the leaders of the comparatively moderate Palestinian Hamas movement, which the leader of Sinai Province, Abu Hajer al-Hashimi, branded as infidels. The group disrupted the passage of goods through the tunnels from Egypt, causing an economic crisis in Gaza. Tensions between the two parties escalated in the wake of Hamas’ arrest of almost 350 jihadist elements in Gaza that expressed their support for Sinai Province’s values. Another reason for the escalation is Egypt’s improving relations with Hamas, especially enhanced security cooperation to stop the smuggling of weapons along the border between Gaza and Sinai and to prevent Salafi jihadists from using Gaza as a base for preparing attacks against Egyptian military forces in the Sinai Peninsula.

Since its formation in 2013, Ajnad Misr has claimed responsibility for several attacks against security forces in Cairo and other cities. The group’s leader, Majd al-Din al-Masri, has declared war against the current Egyptian regime led by Abdel Fattah al-Sisi. The group’s members are mainly young and several participated in the 25 January 2011 revolution that brought down Mubarak. The group considers democracy as a mechanism for stabilizing the foundations of ‘tyrannical regimes’. It argues that the Arab tyrannical regimes must be targeted for their protection of Israel. The Cairo Court for Urgent Matters declared the group a terrorist group on 22 May 2014. The US Department of State designated it a terrorist organization on 18 December 2014.

Tawhid and Jihad is a violent extremist organization that is closer to takfiri (those who pass judgment on others as infidels) thought than the Salafist ideology. Its origins date back to the 1990s. Currently operating in the Jabal al-Halal area of Sharm al-Sheikh, the group uses violence to achieve its objectives. The Egyptian judiciary holds it responsible for the 2004-2006 bombings in Sharm el-Sheikh, Dahab and Nuweiba, where foreigners and the tourism sector were targeted in an attempt to weaken the Egyptian economy. In recent years, the Egyptian regime has accused the organization, in cooperation with some Palestinian Salafists in the Gaza Strip, of training members in the use of weapons and explosives. According to some media sources, it has 900 members.

Jihadist groups choose to be based in the Sinai Peninsula for several reasons. First and foremost is the weak security presence due to the 1979 peace agreement with Israel, which severely limits the number of military and police permitted in the peninsula. Other reasons include the rugged and inaccessible terrain and the political and economic marginalization of Sinai’s tribes, which have made them willing allies.

The security chaos following the fall of President Mubarak , the escape of Salafi jihadists from Egyptian prisons and the abundance of arms smuggled from Libya after Muammar Qaddafi was toppled in 2011 created the ideal environment for the expansion of radical groups and terrorist operations. Even with Hamas now apparently on the side of the Egyptian state, unless Sinai’s economy, infrastructure and education system are significantly improved, this situation is unlikely to change any time soon. 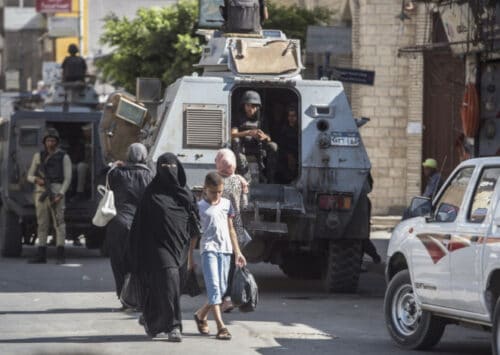 In Egypt, Sinai Residents Face a Living Hell
For decades, the residents of North Sinai have suffered marginalization and the absence of a state presence, resulting i...