Fanack Home / Egypt / History of Egypt from Past to Present / In Egypt, Political Satire Pushed to the Margins

In Egypt, Political Satire Pushed to the Margins

On 25 January 2016, TV reporter Shady Abu Zaid and actor Ahmed Malek handed out balloons to police officers, pretending to celebrate National Police Day in Egypt. The day also marked the fifth anniversary of the Egyptian revolution, when protesters stood up to the police.

The balloons Abu Zaid and Malek handed out were in fact inflated condoms. The video of them mocking the police, who were out in force that day to curb possible pro-revolution protests, was posted on social media and went viral.

The prank had a political message, as Abu Zaid said in the video: “As long as there are no protests or any dissenting voices, we’ll make fun of you to death. I hope you enjoyed.”

Both TV personalities came to regret their actions. The media attacked them for ‘insulting’ the police, Malek was suspended from the Actors’ Syndicate and Abu Zaid’s show, Abla Fahita, distanced itself from the prank.

Malek quickly apologized, but Abu Zaid remained defiant. “Why is everybody angry? I was joking,” he wrote on his Facebook page, adding that jokes are the “only tool we have left to face their [regime] weapons, power and legitimacy”. His comment attracted threats on social media, including in videos posted by the police and the Interior Minister Abdel Magdy Ghaffar, who said, “We’ll leave it to society to punish them.”

Abu Zaid is currently doing his military service and was unavailable for comment.

The backlash shows how the space for political satire in Egypt is rapidly diminishing. This was the other way around after the revolution in 2011, when political satire flourished. The main man on the scene was Bassem Youssef, who commented on political events in his show El Bernameg (The Programme), often poking fun at Islamist President Mohamed Morsi and the then ruling Muslim Brotherhood. His concept resembled The Daily Show in the United States (US), with Youssef being dubbed Egypt’s Jon Stewart.

The tide turned after the ouster of Morsi on 3 July 2013. After a three-month break, Youssef’s third season began airing in October 2013. In the first episode, Youssef ridiculed the adoration of the media and common Egyptians for general-turned-president Abdel Fattah al-Sisi.

Following the episode, CBC channel suspended the show for violating ‘editorial policy’. El Bernameg returned in February 2014 on MBC Masr. However, in April 2014, the show was suspended again, “so as not to influence voters during the presidential elections [in May 2014],” MBC stated.

In June 2014, Youssef announced El Bernameg would go off the air permanently, saying, “the present climate in Egypt is not suitable for a political satire programme.” He now lives in self-imposed exile in the US.

In January 2016, another satirical TV show was imported from the US to air in Arabic: Saturday Night Live. Cast member Khalid Mansour told CNN that they were trying to follow in Youssef’s footsteps. “El Bernameg set the tone for this kind of comedy,” he said. “We are trying to live off that legacy.”

However, unlike El Bernameg, Saturday Night Live shies away from sensitive political issues. Lead writer George Sami explained to AP the challenges that come with satire in Egypt. “Everyone is antagonized… You cannot make a decent joke without offending someone.” Co-producer Tarek El Ganainy added that politics “is no longer funny. We are living in a transitional period, so no one can stand joking about it.”

This is making living up to Youssef’s legacy a difficult, if not impossible, task. Amid the ongoing crackdown on any voices of dissent, political satire is seen as a threat to the authority and legitimacy of the regime, which continues to maintain that it is in a transitional phase towards democracy.

As the country’s economic woes cause financial strain and possibly new social unrest, the regime wants to keep a firm grip on public opinion and the flow of information. There is no space for a two-minute Facebook video pranking the police, let alone a satirical TV show.

In October 2015, army conscript Amr Nohan was sentenced to three years in jail on charges of attempting to overthrow the regime, for posting a photo on Facebook showing al-Sisi with Photoshopped Mickey Mouse ears.

In May 2016, five members of the satirical group Street Children were arrested on charges of inciting protests and insulting state institutions after posting a video mocking al-Sisi and his supporters. They were released in September 2016, after a court accepted their appeal.

Nevertheless, satirical jokes continue to find their way onto social media, especially after public speeches by the president. Whether he is asking Egyptians to donate their small change to the state or saying he “would sell himself” for Egypt, he is made fun of.

For now, this is all that is left of Youssef’s legacy of political satire in Egypt. 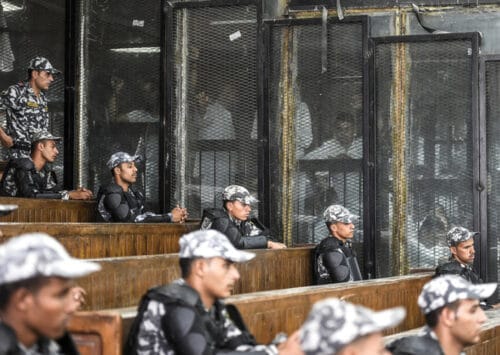 In Egypt, the Space for Dissent Has Shrunk to Zero
al-Sisi regime has succeeded in rebuilding the wall of fear separating citizens from the state. The space for dissent in...