Commuters passing through Cairo’s busiest metro station Shohada (‘Martyrs’ – renamed from its former name Mubarak after the 2011 revolution) are being offered a new service: free religious advice or ‘fatwas’ courtesy of al-Azhar.

Al-Azhar, the highest seat of Sunni teaching and Egypt’s most important religious authority, opened the kiosk to provide on-the-spot religious advice in July 2017. When Fanack visited the kiosk, three people were waiting in line to speak to two sheikhs. Dressed in traditional robes, the sheikhs did not want to respond to questions from a journalist.

It is common practice for Muslims to consult a sheikh for everyday life or religious dilemmas, in order to get advice on the proper Islamic way to deal with the issue.

The idea behind the fatwa kiosk comes from al-Azhar’s effort to promote a ‘moderate Islam’. In 2015, Egyptian President Abdel Fattah al-Sisi called for a ‘revolution in religious discourse’ to combat extremist thought. Through the kiosk, al-Azhar hopes to extend its reach and prevent people from falling for extremist ideas. The kiosk is considered a pilot, and extensions to other metro stations are on the table.

Since al-Sisi took over from Muslim Brotherhood President Mohamed Morsi in 2013, the country has faced an ongoing insurgency from Islamic State (IS) affiliates and other, smaller Islamist groups. The conflict is most pressing in North Sinai, where the local IS group launches almost weekly attacks on security forces. In April and May 2017, suicide bombers targeted the country’s Coptic Christian community.

The fatwa kiosk has received mixed reactions. Some commuters said that they were happy with the kiosk, as it provides an accessible means to find advice. Others see it as a sign of increasing religiosity and an attempt by al-Azhar to impose religious values on the public. MP Mohamed Abu Hamed tweeted on Twitter that the kiosk proves al-Azhar is ‘detached from the reality of society’. Egyptian human rights activist Hisham Kassem commented: “Religion is for God and the metro for the public.”

The role of al-Azhar in Egypt in general is subject to debate. Following the attacks on Coptic churches in Tanta and Alexandria on Palm Sunday, some have criticized al-Azhar for not declaring IS radicals as apostates. One vocal critic is TV presenter Islam Behery, who argued that al-Azhar should reject certain historic Islamic teachings as these would incite violence against non-Muslims and be an ideological source for IS. Behery’s criticism led to charges of blasphemy and a one-year prison sentence.

Others have described al-Azhar University, an important centre for Islamic studies for students from all over the world, as a breeding ground  for jihadists.

Dr H.A. Hellyer, a senior fellow at the US-based Atlantic Council and an expert in Islamic studies, believes this sort of criticism can be problematic. “I would be worried if al-Azhar starts liberally deciding who is a Muslim and who is not,” he told Fanack, adding that is it typical for IS to declare other Muslims apostates.

According to Hellyer, the problem with al-Azhar is part of a much broader issue in Egypt: poor education. “Al-Azhar is a huge and chaotic organization, and the educational system doesn’t encourage the academically adept to go to al-Azhar. That means bad teachers can seep in easily, along with bad students, which makes many vulnerable.”

Hellyer believes Egypt and the Islamic world in general could benefit from the religious authority of al-Azhar, as it could refute the ideological base of IS, although he expresses concern about the functionality of the organization. He does not see removing certain Islamic teachings from the curriculum as a solution. “You shouldn’t remove the concept of jihad from the curriculum, you have to put it in its proper historical context and thereby show that it cannot justify the deeds of extremists.”

Rather than ‘radical’, Hellyer would describe al-Azhar as a conservative institution that does not like outside interference in what it considers as its exclusive domain, namely religion. This explains its strong response to criticism from people like Behery.

In another example, al-Azhar rejected a proposal by al-Sisi to legally restrict the practice of ‘verbal divorce’, a concept in sharia allowing a man to divorce his wife simply by uttering a phrase three times. “There could actually be an Islamic basis for restricting verbal divorce, but al-Azhar would not go along with it as in its view al-Sisi’s proposal was an interference in its domain,” Hellyer said.

The public debate on the role of al-Azhar in dealing with extremism forms the background in which the fatwa kiosk was opened. The initiative may thus be seen as a means by al-Azhar not only to combat extremist thought but also to assure its position as the main Islamic authority in the country and increase its visibility as such among the people. 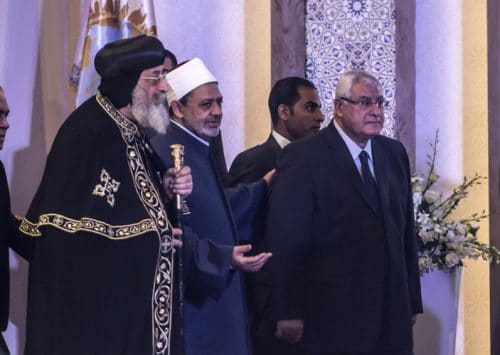 Egypt’s Al-Azhar University Increasingly Under State Control
The Egyptian president has called on al-Azhar repeatedly to reform its religious discourse, especially the fatwas it iss...