Fanack Home / Egypt / History of Egypt from Past to Present / In Egypt, No End in Sight for Islamic State Insurgency

In Egypt, No End in Sight for Islamic State Insurgency

Since General Abdel Fattah al-Sisi seized power in July 2013, combatting jihadists in North Sinai has been a top priority for Egypt’s armed forces.

Yet four years on, the situation is far from under control. On the contrary, in May 2017, local Bedouin tribes mobilized to fight the jihadists who, since 2014, have been affiliated with the Islamic State (IS) under the name Sinai Province.

This followed a major operation in March 2017 by Egyptian special forces in Mount Halal, Central Sinai to eliminate militant hideouts. The success of the operation remains unclear as the only information available comes from army statements, and the area is virtually inaccessible for independent observers. Moreover, a 2015 terrorism law forbids the media from reporting casualty numbers from terrorist-related incidents that differ from official sources.

Not long after the army announced it had established control over Mount Halal, IS hit a police checkpoint near the Saint Catherine monastery in South Sinai, far from its usual area of operation in North Sinai, where attacks are an almost weekly occurrence.

In June 2017 alone, IS killed four police officers and one police officer in separate attacks as well as a government-affiliated imam in Arish, the provincial capital of the Sinai governorate. Civilians have also been targeted, in revenge for cooperating with security forces.

The army regularly issues statements about the number of terrorists killed or arrested. However, as the Israeli newspaper Haaretz noted, the 6,000 ‘terrorists’ the army has reportedly killed greatly exceeds the estimated 1,000-1,500 fighters active in the insurgency. This discrepancy has raised suspicion, supported by anonymous reports by local residents, that at least some of those killed are civilians.

For instance, two residents of villages near Arish told news website De Correspondent in 2015 that civilians are often the victims of army operations, which are later reported as terrorist deaths.

Footage that emerged in April 2017 supported these reports. The video showed soldiers executing unarmed detainees. Human Rights Watch reconstructed the video, suggesting that two of the victims were local residents who had been arrested and forcibly disappeared in July 2016. The army released photos of the victims in November and December 2016, as part of a statement claiming it had killed terrorists during a raid.

The insurgency in Sinai goes back to 2011, when jihadist group Ansar Beit al-Maqdis emerged. Over the years, parts of the peninsula have become bastions of lawlessness. Some areas in South Sinai have become major smuggling routes for drugs, people and weapons from the Red Sea into Egypt and Israel, some local Bedouin chiefs say. In North Sinai, meanwhile, an industry has developed out of smuggling weapons and other contraband into Gaza through a network of tunnels that run under the border.

Many have accused former President Mohamed Morsi of allowing Islamic fundamentalism to prosper, in part by pardoning hundreds of jihadists imprisoned by Mubarak. As a member of the Muslim Brotherhood, Morsi would be close to jihadist ideology, according to these critics. However, research by local news site Mada Masr suggests that Morsi released 27 Islamists during his one-year rule in 2012-2013, whereas the Supreme Council of the Armed Forces, which temporarily assumed power following Mubarak’s ouster, released more than 800.

After coming to power in 2013, al-Sisi stepped up the fight against jihadists in North Sinai. He destroyed the smuggling tunnels to Gaza and ordered the creation of a buffer zone along the border, forcing many residents from their homes and destroying villages.

The violence has continued to escalate, however, culminating in several major attacks. Most notable was the July 2015 rocket attack on an Egyptian navy ship off the coast of Sinai, and simultaneous assaults on Sheikh Zuweid, which allowed IS to gain control of the city, albeit briefly.

In the two years since, IS has moved away from such large-scale attacks, according to journalist and Sinai expert Mohannad Sabry, because small-scale attacks are more effective and pose fewer risks to fighters.

In February 2017, the group stepped up its attacks on Christians, calling them ‘favourite prey’. Sabry told Dutch media at the time that targeting Christians mostly serves propaganda purposes. “As of August 2016, 21,000 people had been displaced in North Sinai. Nobody talks about that. The papers are talking about 1,000 displaced Christians at most,” he said.

In addition, hundreds of Sinai residents have fled to Gaza, Qatari news channel al-Jazeera reported. In recent weeks, Gaza’s ruling Hamas group has sought to improve relations with Egypt, which have been strained since Morsi’s overthrow in 2013. On 28 June 2017, Hamas announced it had started work on a new buffer zone, on the Gazan side of the border. The announcement came a week after Egypt began delivering a million litres of fuel to the Palestinian enclave, temporarily easing a power crisis that has left its two million residents with only a few hours of electricity per day.

These measures are likely to have only a limited effect, however, as IS increasingly expands its operations outside North Sinai. The group claimed responsibility for the downing of a plane carrying Russian tourists in Central Sinai in October 2015, and for attacks in churches in Cairo, Alexandria and Tanta in December 2016 and April 2017. In May 2017, it attacked two buses carrying Christians in Minya, Upper Egypt, killing 30.

Despite intensive military efforts, the insurgency is continuing unabated. An account from an anonymous local source sheds light on the failings of Egypt’s counterinsurgency strategy. The source told Fanack that masked men once raided his family’s house in Arish, forcing those inside to their knees at gunpoint. The men were looking for a particular person, and left when they did not find him. The family said they could not tell whether the intruders were soldiers or IS militants, but suspected the former as they had Cairo accents.

Such incidents reflect the frequently heard argument about why the army is failing to beat a limited number of militants in a relatively small area: it is using conventional warfare to fight an unconventional enemy, and in the process is losing the hearts and minds of the population. 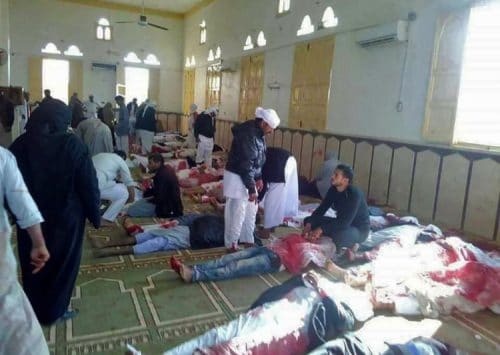 Two Bloodbaths and a Security Reshuffle: Is Egypt Losing Its War on Terror?
In a best-case scenario, the horrific mosque attack will create a backlash against IS, which the state could capitalize ...