Fanack Home / Egypt / History of Egypt from Past to Present / Mubarak Walks Free. What Next for Egypt?

Mubarak Walks Free. What Next for Egypt?

The acquittal and subsequent release of former Egyptian President Hosni Mubarak on 2 March 2017 could not have been more symbolic.

A little over six years after mass protests forced Mubarak to step down and the spark of revolution ignited in the streets, Egypt is once again ruled by a military autocrat, the media have largely been downgraded to state press offices, activists have fled abroad, been imprisoned or live in constant fear of arrest, and parliament is a mere sideshow that effectively backs the president unconditionally.

Just as Mubarak did, current President Abdel Fattah al-Sisi is – successfully – gaining support from world leaders on the pretext that he is the only feasible alternative to Islamic extremism and a crucial partner in the ‘war on terror’.

And now Mubarak, the face of Egyptian oppression, has been acquitted by the top appeals court of involvement in the death of 800 protesters during the 2011 uprising and released from the military hospital in which he was being held.

The people surrounding Mubarak at the time are also free men. His sons, Gamal and Alaa, were released from prison in October 2015, after serving three years for embezzlement of public funds. Former Interior Minister Habib al-Adly and his aides were also cleared of charges related to the death of protesters and released in 2015. For many, it feels like the counterrevolution has been completed.

Egyptian novelist Ahdaf Soueif tweeted: ‘841 people were killed in our first 18 days. 673 of them were shot. We know their names and where they fell. Who ordered these killings?’

‘The counterrevolution continues. Mubarak is free. The youth who ousted him [are] in prison. The ’52 clique of military officers continues to rule,’ tweeted Timothy Kaldas, non-resident fellow at the Tahrir Institute for Middle East Policy, referring to Egypt’s succession of military rulers since a group of army officers seized power in 1952.

“It’s a nice cherry on the top of the situation we are in,” Egyptian activist Wael Eskandar told The Washington Post. “It vindicates the entire history of Mubarak’s corruption and dictatorship. It is a sign that this present regime is approving of all the past practices and there’s no need for condemnation.”

The Egyptian-American journalist and author Mona Eltahawy labelled Mubarak’s release as a ‘stinging insult’ in an op-ed for The New York Times. She recalled the ‘thrill’ of seeing Mubarak, ‘this incarnation of all the entitlement accrued over nearly 30 years of rule’, in a cage in the courtroom, and described the scene as the expression of ‘Egypt’s revolutionary audacity’.

If Mubarak is not held accountable, ‘how will we hold Mr. Sisi and other senior security personnel accountable for another massacre?’ Eltahawy wondered, referring to the Rabaa massacre in 2013, when over 800 died in a single day during the dispersal of a pro-Muslim Brotherhood protest camp in Cairo. Other commentators have raised questions over the genuine intentions of the trial in the first place.

Mieczyslaw Boduszynski, assistant professor of politics and international relations at Pomona College in California, wrote in The Washington Post that ‘the Mubarak trial was one of concessions made by the SCAF [Supreme Council of Armed Forces} in a bid for legitimacy’.

According to Boduszynksi, the military rulers allowed the trial to move forward in order to gain ‘longer-term legitimacy from the “street” by co-opting the revolution and buying support for an early transition plan’. ‘The decision to place Mubarak and his associates on trial was a clear response to rising public pressure,’ he argued.

Amr Khalifa, Egyptian political commentator and frequent contributor to a number of media, agrees with this point of view and sees the trial as a political facade. “To appease an at the time super-heated public, SCAF saw fit to put on a play to serve their political needs and to silence screaming masses,” he told Fanack in an email.

For Khalifa, Mubarak’s recent acquittal merely “serves as the exclamation point to a period of time [wherein] the counterrevolution has decimated any remaining memories of a beautiful period of revolutionary dreams”.

At the heart of the matter is the reality that the Egyptian revolution has never been a true revolution in the sense that it was unable to abolish a certain political system. Although Mubarak as head of the system was removed, the ruling military elite, the police apparatus and officials affiliated with the regime remained in place, and despite having to make some concessions to the public, remained in control of the state.

“The Mubarak state still ruled even though it was no longer in power, and as a direct result men on the upper rungs of the Egyptian bureaucracy saw to it that prosecutors had an impossible time getting to the facts,” Khalifa said of Mubarak’s acquittal. “Those dreaming of another revolution must return to square one,” he said. However, some activists remain confident that the revolution is ongoing.

An Egyptian human rights lawyer, who has recently been released from prison and asked to remain anonymous, told Fanack that he has “no interest” in Mubarak’s release, which he described as “something funny”. For him, what is significant is the fact that Mubarak was imprisoned in the first place. “Even if he has been released, we have put him in prison for six years. We are proud to have put him in a cage.” The revolution was about improving the lives and rights of Egyptians, not about personal revenge, and he is determined to “continue the fight for justice”, he said.

He believes the current setback in rights and freedoms is a phase in a longer process, during which activists are learning from past mistakes and preparing for the moment the current regime will fall; something that will undoubtedly happen, in his opinion. “We have learned that the problem is not who is in charge, but the people who benefit from the system, like generals, certain businessmen and politicians,” he said.

Meanwhile, the news of Mubarak’s release was met with apparent resignation by the general public. Cairo’s streets remained completely calm. In November 2014, when charges against Mubarak were dropped in a lower court, thousands flocked to a square near Tahrir, which itself was sealed off by security forces that day, to protest the verdict. This time, there were no more police than usual around Tahrir and downtown Cairo. “There is a general fatigue sprinkled with healthy doses of deep-seated fear,” Khalifa explained.

Perhaps more importantly, six years after Mubarak’s fall, Egyptians seem to have readjusted to the return of the old status quo. Economic hardship and the daily struggle to survive are a greater concern than the old president walking free.

Although Mubarak’s trial was a facade to begin with, and his release a logical consequence of the fact that the regime has never changed, for several years this regime at least had to take public opinion and the ‘power of the streets’ into account.

The most symbolic aspect of Mubarak’s acquittal may well be that the state has regained control over the masses and the streets to the extent that it can release the once-hated leader without any unrest. 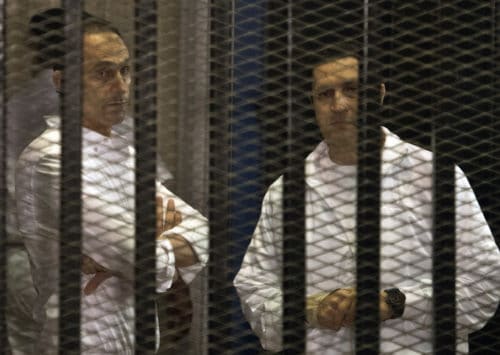 Surprise Arrests a ‘Message’ for Mubarak’s Sons to Back Off
With close links to the business elite, Mubarak’s sons symbolize their father’s corrupt regime in the eyes of the pu...