Presidential Elections That Are No Election in Egypt

Campaigning for Egypt’s presidential elections, to be held on 26, 27 and 28 March 2018, officially started on 25 February 2018. Although banners and billboards supporting the incumbent, President Abdel Fattah al-Sisi, have been visible all over Cairo and other cities for months, their number has exploded since the official start of campaigning.

Many banners laud al-Sisi’s economic achievements, such as the much-hyped Suez Canal extension, the country’s ‘new capital’ – currently under construction – and the development of large offshore gas fields. Others highlight his fight against terrorism, now taking the form of a massive army operation against Islamic State affiliates in Sinai. ‘Fighting terrorism is a human right’, one banner proclaims, a not-so-subtle jab at the continued international criticism of the regime’s deplorable human rights record. Another banner in central Cairo reminds citizens of their duty to go out and vote. Radio commercials tell Egyptians that this is the moment to decide the future of their country.

There is just one problem: the winner has been known for months. With the elimination of any serious competition, al-Sisi’s sole challenger is the relatively unknown Moussa Mostafa Moussa, leader of the pro-regime Ghad party and a fervent al-Sisi fan. During a televised interview, Mousa elaborated on al-Sisi’s economic achievements, stressing that he did not have any achievements himself. He even said that al-Sisi’s programme is better than his. In a video before he announced his candidacy, Moussa openly supported al-Sisi, saying, “We know he is winning.” Analysts and citizens alike consider him nothing more than a puppet candidate to give the elections a facade of legitimacy and credibility.

Al-Sisi’s certain ‘re-election’ – or more accurately, the extension of his presidency for at least another four years – follows an almost five-year period after the 2011 revolution during which the political space has been gradually closed. Since al-Sisi ousted Mohamed Morsi from power in July 2013, he has worked steadily to strengthen his grip on the country and extend his power base.

Yet faced with an economic crisis that forced the government to take measures that hit the middle class and poor hard, in addition to the ongoing war in Sinai that shows little sign of being won, al-Sisi’s popularity is not a given. Hence, an election holds the risk for the regime of opening up the political debate, something it is keen to avoid. “Al-Sisi is paranoid about losing support,” a political analyst in Egypt previously told Fanack Chronicle.

After suggestions by pro-regime MPs to extend al-Sisi’s term from four to six years drew criticism, the decision was made to hold presidential elections according to the 2014 constitution.

In a perhaps unexpected turn of events, several serious contenders announced their intention to run, showing that even within the establishment, including the army, support for the former general is not absolute. The first contender was Ahmed Shafiq, a former vice-president who lost to Morsi in 2012. After announcing his intention to run, he was deported to Egypt from his home in the United Arab Emirates and detained in a Cairo hotel for a month until he withdrew. Several of his supporters have been arrested.

In January 2018, General Sami Anan announced his candidacy. A prominent military leader, Anan was a deputy chairman of the Supreme Council of the Armed Forces (SCAF) for seven years, including the period that the SCAF ruled Egypt between the fall of dictator Hosni Mubarak and Morsi’s election. Anan was also arrested, this time by the military. His campaign leader Hisham Geneina, former chief auditor who had been targeted before for critical remarks he made about corruption, was beaten in the street and later arrested as well. Anan’s son Samir has been under investigation and suspended from his position at a leading university in Alexandria.

Another military man, Colonel Ahmed Konsowa, was arrested and put on trial shortly after announcing he was running in November 2017. Other potential candidates, most notably lawyer Khaled Ali and former MP Mohamed Anwar el-Sadat, have refrained from running, citing unfair competition.

Meanwhile, the state’s already firm grip on the media has tightened further. Pro-regime TV presenter Khairy Ramadan was detained in early March 2018 on charges of ‘defaming the police’ and ‘spreading fake news’ after he addressed low police wages. A week earlier, two reporters were arrested while filming an old tramway in Alexandria and are being investigated for ‘filming without a license’, membership of a banned group and the possession of ‘tools’ to spread fake news.

Al-Sisi himself said on television that any ‘insult’ by the media of the army or police would be considered defamation of the country and treasonous. General Prosecutor Nabil Sadiq ordered state prosecutors to monitor the media and take action against fake news that would harm national interests. “Forces of evil” had been trying to “undermine the security and safety of the nation through the broadcast and publication of lies and false news”, he said.

Two incidents known to Fanack Chronicle give an insight into how the state mechanism behind the elections could work. First, many pre-campaign banners were put up by local police. When a large banner next to a popular café in Cairo accidentally fell down in January 2018 and was not put back up, the café owner was fined EGP 20,000 ($1,134).

In addition, there are frequent pro-al-Sisi rallies. In one such rally in Minya in Upper Egypt, Fanack Chronicle heard from a participant that all employees at the local municipality were ordered not to come to the office but to go to the rally instead. The daily registration lists for employees were present at the rally.

A rally for Moussa was organized on 4 March 2018 but nobody showed up, AP reported. A passerby did not even know the candidate on the posters, believing at first it was al-Sisi.

Hence, Egypt moves steadily and surely towards a second term under al-Sisi, all the while pretending there is an actual competition from which he will emerge victorious. 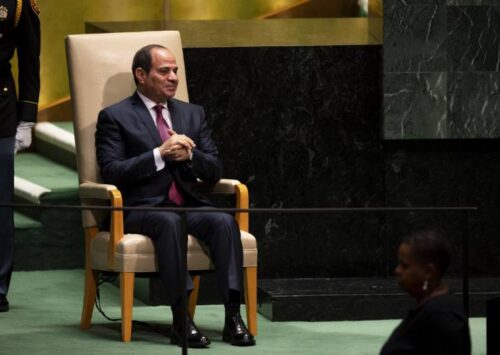 Sisi’s Egypt
After three years of economic turmoil and a lack of security, many people had very high expectations of al-Sisi’s pres...