While the protesters who took to Tahrir Square in January 2011 had many differences that would play a pivotal role in the following years, they were united in at least one thing—blaming long-time autocrat Hosni Mubarak for most of Egypt’s problems.

So when he moved to his mansion in the coastal city of Sharm al-Sheikh, after stepping down on 11 February, there were loud calls to try him for various crimes, including the killing of protesters during the uprising. These calls were finally heeded in late May 2011, when he was charged with intentional murder, attempted killing of protesters and embezzlement of public funds.

On 2 June 2012, the court found Mubarak and his interior minister, Habib al-Adly, guilty of involvement in the killing of protesters and sentenced them to life in prison. This verdict was overturned six months later, however, and an appeals court ordered a retrial.

This led to a stunning turn of events when, on 29 November 2014, the court reversed the ruling, essentially allowing Mubarak to walk free. This caused confusion, as people did not understand what happened. Mubarak was neither convicted nor acquitted; instead, the judge threw out the entire case on a technicality.

Human-rights lawyer Hossam Bahgat explained that one should look back at the events that followed the 2011 uprising. When the public prosecutor built the case against various defendants for the killing of protesters, Mubarak was not among the initial defendants; he was only added two months later, possibly due to pressure from the demonstrations in Tahrir Square demanding that the ex-president be held accountable as well.

Following the dismissal of the charges, the court erupted with applause from Mubarak supporters, while parents of the protesters killed, waiting outside the court, were grief-stricken. As different as their stances were, the two sides agreed that this spelled the end of the revolution, with the country going full circle, to where it had been before the beginning of the uprising, in 2011.

Mubarak supporters, who reiterated their position that the revolution was a foreign ploy to destroy Egypt, hailed the ruling as proof that things were back to normal and that the revolution had failed. Some even called on Gamal Mubarak, the younger son of Hosni Mubarak, to run for the presidency in 2018. The protesters who had risen against Mubarak in 2011 felt that this was the reversal of the last of the revolution’s gains and the end of their dreams for change.

Later in the evening, in a brief television interview by phone, Mubarak said that he laughed when he heard the first verdict, insisting that he “hadn’t done anything wrong.”

The public prosecutor announced that he would appeal the court’s verdict before the Court of Cassation (Egypt’s highest criminal court). Attorney Bahgat pointed out that such large cases can drag on for a long time in Egyptian courts.

The acquittal of Mubarak sent waves of anger through the young protesters, who, in an increasingly rare act of defiance, took to the streets and gathered at Abdel Moniem Riad Square, near the iconic Tahrir Square. A few thousand people took part, quickly increasing in number, chanting against Mubarak, the military, the Muslim Brotherhood and the Egyptian judiciary.

Commenting on the ideological variety of protesters drawn together by the ruling, a young member of the Dostour political party said, “it is the closest we have felt to the days of the 25 January revolution in years.”

The protest was tolerated for only a few hours before security forces stormed in and dispersed the protesters to the side streets with tear gas and birdshot, the interior ministry claiming that it was no longer a peaceful protest, when “members of the Muslim Brotherhood infiltrated the protest.” There were also reports of live ammunition used and of two deaths, but the interior ministry denied both.

The dispersal broke up the gathering quickly, and the protesters failed to regroup later. They were not allowed into Tahrir Square, which security forces had closed down in anticipation of unrest, and Cairo’s head of security reported the arrest of some 85 people.

Following the court’s decision, Mubarak was flown back to the military hospital where he was being held and treated. Even though he had been found not guilty of killing protesters, he was still serving time for embezzling more than 100 million Egyptian pounds of public funds to furnish his and his sons’ mansions.

On 13 January 2015, however, the Court of Cassation accepted an appeal from Mubarak’s lawyer, which meant he could now go free, pending investigation. Even if the court had refused the appeal, Mubarak already would have served his three years in prison and would have been released.

Sources in Mubarak’s defence team have said, however, that he will remain in hospital for health reasons and because it was not safe for him elsewhere. Later, a spokesperson for the interior minister said that Mubarak was still in detention because only the public prosecutor’s office or the court that will retry him can order him released.

The changes over the past few months nevertheless meant a complete reversal of Mubarak’s situation. He went from a life sentence to freedom in little more than a year, and the rhetoric against him and his era on television talk shows has been toned down considerably since the ouster of his successor, Mohamed Morsi. Instead of commenting on the corruption or the deterioration of conditions during his rule, he is often hailed in these programs as a hero who staved off the threat of the Muslim Brotherhood during his 29 years as president. 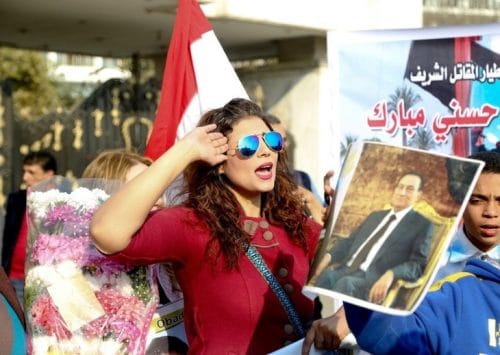 Mubarak Walks Free. What Next for Egypt?
Although Mubarak’s trial was a facade to begin with, and his release a logical consequence of the fact that the regime...