Fanack Home / Egypt / History of Egypt from Past to Present / Sinai: A Fertile Breeding Ground for Extremists

Since ancient times, the Sinai Peninsula has been known for its smuggling routes and lawless ways. The terms of the 1979 Egyptian-Israeli peace accords, which included Israel’s agreement to withdraw its military forces from the peninsula, allowed smugglers and other criminals to gain the upper hand in Sinai. In 2015, extremist groups roam freely in this part of Egypt.

Several elements have helped to strengthen the presence of extremist groups in this strategic strip of land. Not least is its sheer size, which measures 60,500km2. It is also sparsely populated, with only 6,000 official residents in 2013. Its rugged desert topography provides ample hiding places for extremist groups and hampers efforts by the Egyptian security forces to find them.

Geographically, Sinai connects Egypt with Israel and the Gaza Strip, as well as Jordan and the Kingdom of Saudi Arabia. Decades of economic underdevelopment and the resulting extreme poverty have made the peninsula a fertile breeding ground for extremist groups and religious fanatics.

Tribal laws and social affiliations have also prevented Egypt’s security forces from penetrating the area and bringing criminals and militants to justice. Nepotism and tribal loyalties have kept the population insulated, but have also played into the hands of extremist groups who use local customs to their benefit.

The power and security vacuum created by the 25 January 2011 revolution affected Sinai more than other parts of Egypt. Extremist groups with a fundamentalist agenda used the political instability to assert control over much of the peninsula. The release of thousands of prisoners jailed for their affiliation with extremist groups accelerated this effective take-over.

The 17 February 2011 revolution in Libya added to the existing security chaos. Extremist groups active in Sinai linked up with extremists in Libya, freely bringing weapons confiscated from Muammar Gaddafi’s regime over the now porous borders.

The quantities of weapons brought into and stored in Sinai and progressively into the Gaza Strip through a complex network of tunnels in Rafah on the Egyptian border were enormous.

Although the Egyptian army attempted to regain control of Sinai after the end of the Mubarak regime, it was unsuccessful. A 2011 military operation known as ,Operation Eagle was launched to wrest control from local gangs, but armed attacks against Egyptian soldiers and police who tried to patrol trade and the smuggling of weapons, goods and people, continued.

After Muhammad Morsi of the Muslim Brotherhood was elected president in June 2012, abductions for ransom of military and police officers by Sinai gangs increased. In response, Morsi launched Operation Sinai in May 2013. While he was able to reduce the number of abductions, he was not able to end them entirely. Since the overthrow of the Morsi government in July 2013, the number of armed attacks, including killings of Egyptian military, in the Sinai has increased incrementally.

The “Generations” of the Extremist Groups

The extremist groups operating in Sinai can be divided into three categories or generations. The “first generation”, the Islamic Jihad Organization, emerged in the early 1970s and was responsible for the assassination of President Anwar Sadat in 1981.

The “second generation”, known as Tawhid, began its activities during Hosni Mubarak’s presidency in the 1980s and 1990s. It became infamous for militant attacks and bombings in Egyptian cities. It carried out several assassinations of prominent Egyptian political figures, including the People’s Assembly member Rifaat al-Mahjoub on 12 October 1990.

The “third generation” merged members of the Tawhid and Islamic Jihad groups and was influenced by the ideology and methods of al-Qaeda. It began targeting state symbols in 2004.

Experts estimate that no fewer than 14 separate terrorist organizations are operating from the Sinai Peninsula today. While some are older, more established groups, many are new networks and affiliations of deserters and recent arrivals from Egypt and abroad.

The most extreme groups and organizations espouse the ideologies and methodologies of al-Qaeda and the Islamic State in Iraq and Syria (ISIS). They include members and supporters of the jihadist group Ansar Bayt al-Maqdis, supporters of Salafi jihadis, the “Shura Council”, an Islamic insurgency umbrella organization, and a group known as Jundallah.

The weapons used by many of these groups include anti-aircraft missiles as well as heavy and light artillery. Many are well trained and adept at carrying out armed robberies –a major source of funds for their operations. They are also IT savvy and have used this knowledge to acquire financing and disrupt government services.

Egypt Fights against the Extremists

They have increasingly infiltrated Egyptian governorates outside Sinai – which include the capital Cairo – where in 2014 they succeeded in bombing the Cairo Security Directorate, a real and symbolic centre of the Egyptian security apparatus.

The groups have specifically targeted state intelligence officers, in a bid to limit the information available to the state and its allies about the capabilities and location of the groups operating in the Sinai. They have said that the killings of numerous intelligence officers should act as a warning to all those working for and with the state.

The official total number of victims of the struggle between extremist groups now controlling the Sinai Peninsula and the army between January 2011 and January 2015, according to the website Sasa Post (citing human rights organisations), is 247 members of the armed forces and other state agencies, 670 alleged extremist gunmen and 70 Egyptian civilians. Seven Israelis and four Koreans were also killed in the Sinai during that period.

On the border with Gaza, hundreds of arrests have been made of both Sinai residents and Palestinians crossing illegally into Egypt. Hundreds of Egyptian homes were destroyed when Rafah was razed to build a security wall along the Egypt-Gaza border.

The Egyptian security apparatus has worked tirelessly to entice the Sinai Bedouin with monetary benefits to help combat the extremists. Without the cooperation of the local population, the security forces do not stand a chance.

Regionally, the situation looks even more precarious. The continued and growing instability in Libya has served to increase the flow of money and weapons into Sinai. The lack of a political and economic solution and the deteriorating situation in the Gaza Strip have made an alliance between extremist groups there and Sinai increasingly likely.

It is clear that there is a correlation between the fight against IS and the groups in Sinai. With the international community engaged with and focused on Iraq and Syria, however, the Egyptian military has been left to fight the war on terror in Sinai on its own. 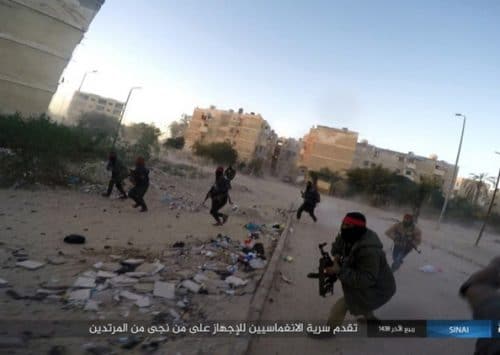 Could Improved Egypt-Hamas Relations Halt Spread of Jihadi-Salafists in Sinai?
The security chaos following the fall of President Mubarak , the escape of Salafi jihadists from Egyptian prisons and th...