Fanack Home / Egypt / History of Egypt from Past to Present / Sisi's Egypt / Is el-Sisi Losing His Grip on Egypt?

Is el-Sisi Losing His Grip on Egypt?

As President Abdel Fattah el-Sisi celebrated his second year in office in June 2016, after a popularly-backed military coup removed his predecessor Mohamad Morsi, the atmosphere in Egypt was growing increasingly bitter, with many people losing faith in the leader who shortly before had been hailed as the country’s saviour.

When el-Sisi came to power in May 2014, political turmoil and mismanagement by the ruling Muslim Brotherhood had left the economy in tatters. He promised mega projects, starting with a major expansion of the Suez Canal and an infrastructure overhaul. However, these have failed to bring about the promised economic growth. On the contrary, terrorist attacks have brought tourism, one of the country’s main sources of income, to an almost complete halt.

A battered economy, rising inflation and a sharp devaluation of the Egyptian pound have sent prices skyrocketing, with the poorer populations hit the hardest. Many families now struggle to make ends meet, and falling foreign currency reserves have slowed economic growth further. Many businesses struggle to find the foreign currency needed to fulfill their international deals, creating a thriving black market for the US dollar.

Unemployment at the start of 2016 had reached 12.7 per cent, rising to over 25% among the youth. El-Sisi’s calls for austerity, which he reiterates in almost every speech, now elicits anger. “He talks and talks about how great he’ll make the country but nothing changes, there’s no hope in this country and the only option left now is to leave,” a young engineer told Fanack on condition of anonymity. This sentiment is widespread. “I used to believe him when he said things would be better after the Muslim Brotherhood,” said another young engineer who works as a project manager in a multinational company as he sipped green tea in one of Cairo’s many coffee shops. “Now, it drives me crazy when my mother says she still admires him when he speaks and believes he will fix things.”

Many other young people have been more vocal in their criticism and have ridiculed the president publicly on social media. This contrasts sharply with his untouchable image only a year ago. When he attended the inauguration of a development project in a Cairo suburb in February 2016, arriving in a motorcade that travelled along several kilometres of red carpet, he was lambasted on Facebook and Twitter by activists. When in one of his televised speeches he urged young people to donate money to his charity to “help Egypt” and said he would sell himself for the sake of the country if necessary, a young Egyptian in the US created a listing on the popular e-commerce website eBay putting el-Sisi on sale as a spoof.

However, the biggest challenge to el-Sisi’s image came during a visit by Saudi Arabia’s King Salman in April 2016, when the Egyptian government announced it was transferring sovereignty of two contested islands in the Red Sea to the Gulf state. The decision, and the secrecy with which it was made, angered young people, who accused el-Sisi of “selling Egyptian land for aid money” and called him everything from an agent to a traitor.

When the government defended its position – insisting that the two uninhabited islands, Tiran and Sanafir, had been Saudi Arabian all along – a flood of social media posts likened el-Sisi to ‘Awaad‘, a proverbial Egyptian farmer who sold his land to eat, an act that brought shame to himself and his family.

The same month, thousands of people took to the streets in the first large-scale, non-Muslim-Brotherhood-led protests in over a year. As they chanted the popular motto of the 2011 revolution, “The people demand the fall of the regime”, security forces arrested over 200 of them, but failed to stop the movement from putting the president in its crosshair for the first time.

In January, before the fifth anniversary of the 2011 revolution that toppled long-time autocrat Hosni Mubarak, the government tightened security to discourage any protests. Police forces clamped down on activists, arresting many of them as they gathered in downtown coffee shops, and police in riot gear blocked most of the gathering places.

A group of street performers who posted videos on YouTube mocking el-Sisi were arrested in early May, accused of trying to overturn to state, signalling how intolerant the ruling regime has become of any dissent. In July, a new report by human rights organization Amnesty International highlighted the increasing number of forced disappearances to intimidate opponents.

Prior to the president’s second anniversary, the Egyptian Center for Public Opinion Research (Baseera), an independent, non-partisan private entity, conducted a survey to gauge public sentiment towards the man whose face had once adorned cupcakes and jewellery.

According to the results, the percentage of people who are satisfied with the president’s performance has dropped from over 90% at his first anniversary to 79%. Furthermore, the percentage is lower among young people and university graduates, at 71% and 73% respectively.

While the drop is significant, it is not enough to pose any real threat to el-Sisi, who continues to have a strong grip on the country. It is clear, however, that the president’s honeymoon period is coming to an end. 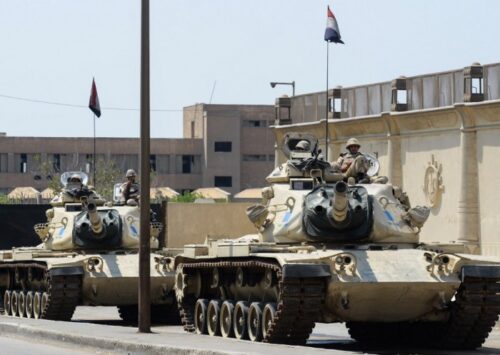 Ahmed Gomaa Xinhua / eyevine ©Hollandse Hoogte
Ahmed Gomaa Xinhua / eyevine ©Hollandse Hoogte
"Ignorance leads to fear, fear leads to hatred, and hatred leads to violence.
This is the equation."
IBN RUSHD/AVERROES (1126 – 1198)
We are a Dutch not for profit organisation (NGO), financed solely by individuals who share our belief in the importance of publishing and disseminating reliable, unbiased information on the Middle East & North Africa region. To represent the voice of the region’s people, we carefully echo the region’s heartbeat by offering fact-checked and therefore credible information.
Your support is greatly appreciated and helpful!
Donate