Fanack Home / Egypt / History of Egypt from Past to Present / Two Bloodbaths and a Security Reshuffle: Is Egypt Losing Its War on Terror?

Two Bloodbaths and a Security Reshuffle: Is Egypt Losing Its War on Terror?

The worst terrorist attack in Egypt’s modern history, which came a month after a deadly ambush on police forces in the Western Desert, has rocked the country and raised further questions about its counterterrorism strategy.

On 24 November 2017, gunmen killed 305 worshippers during noon prayers in a mosque in North Sinai, in what seems to be a broader shift towards sectarianism in the region. Although no one has claimed responsibility for the attack, the local Islamic State (IS) affiliate is active in the area and the mosque targeted is frequented by Sufis, followers of a mystical strand of Islam that Islamist militants consider a form of sorcery.

Militants in the Sinai beheaded two Sufi preachers in November 2016, accusing them of witchcraft. “Extremist groups like IS promote the idea that Sufism is a heterodox form of Islam, and then go further to declare Sufis legitimate targets,” HA Hellyer wrote in The Atlantic.

Analysts have argued that IS would not claim the attack. A mass killing of Muslims in a mosque during Friday prayers is an abomination even for hardline Islamists who could otherwise sympathize with the group. For instance, Jund al-Islam, a little-known group in North Sinai affiliated with al-Qaeda, condemned the attack.

A month earlier, on 20 October 2017, a police unit on its way to raid a militant hideout in the Western Desert, was ambushed in the Wahat al-Bahriya area, about 135km south-west of Cairo. At least 54 police were killed, according to security sources who spoke on condition of anonymity because they were not authorized to brief the media.

It was more than 24 hours later that the Interior Ministry confirmed the deaths of 16 police and dismissed the media reports as inaccurate. Specifically, Egypt’s State Information Services accused the BBC and Reuters of making ‘grave professional mistakes’ and ‘manipulating’ the ministry statement by referring to the attackers as ‘militants’ instead of ‘terrorists’.

The ambush was claimed by the relatively unknown group Ansar al-Islam, which is reportedly loosely tied to al-Qaeda and led by former military officer-turned-jihadist Hesham al-Ashmawy.

In the wake of the ambush, several top security officials were removed from their posts. The shake-up included the dismissal of Mahmoud Hegazy, the military chief of staff, 11 police generals and the head of the National Security Agency, the police’s intelligence division.

Although the official statements announcing the move did not give a specific reason for the reshuffle, it is widely believed to have been prompted by the attack in the Western Desert.

“This is definitely about a response to the Wahat attack, as it comes on the heels of an operational and public relations failure,” Allison McManus, research director at the Tahrir Institute for Middle East Policy (TIMEP), told Fanack Chronicle in an email.

She added, “The reshuffle served two purposes: to demonstrate accountability after such a tragedy, and to send a message to the security leadership and their ranks about the price of failure and dissent.” The sacking of Hegazy would be a punishment for public criticism by military figures after the attack, she said.

Egyptian military and strategic expert Safwat Zayat also sees a clear link between the Western Desert attack and the reshuffle. “Some big mistakes have been made,” he told Fanack Chronicle. “There is no proper coordination between the army and the police. How could the police execute such a mission 140km into the desert without air cover from the military?”

Eman Ragab, a senior researcher at the Al-Ahram Center for Political and Strategic Studies in Cairo, sees the reorganization as a “positive step”. After a terrorist incident in any country, such changes would be expected to take place in institutions that deal with terrorism, she told Fanack Chronicle.

“It shows that the government is not only keen on developing counterterrorism policies but also reassessing the performance of the concerned officials,” she said.

Zayat is more critical. “The reshuffle will not create a sharp, dramatic change in counterterrorism tactics,” he said, adding, “This has been a bad year, in which we have seen many terrorist attacks, and it is time to take serious steps.

While the State Information Services said the mosque attack showed the “weakness, despair and collapse” of terrorist groups, others expressed concern about IS’ capabilities despite years of heavy military operations in the area.

“This attack hit a geographic area the military claims is under control, proving that [IS] is still maintaining some of its capabilities to mobilize weapons, explosives and fighters despite years of war with one of the biggest and strongest military forces in the Middle East,” Sinai expert Mohannad Sabry told the Independent.

According to Zayat, “There were great expectations and promises after the military takeover in 2013 that terrorism in Sinai would be eradicated in weeks. We are four years on and terrorism takes place almost daily.”

The key to solving Egypt’s terror threat is not the removal of a few leading figures but a better strategy, which should be based on winning the “hearts and minds” of the population in areas where terrorism occurs, he said. “You have to ensure people are loyal to you. If you punish them, they start to split from the state. Some will support terror, others will hesitate to provide valuable information.”

Zayat was referring to the situation in North Sinai, where complete villages have been evacuated and bulldozed to create a buffer zone along the Gaza border, internally displacing thousands of people. “We have to change how we deal with civilians,” he said. This is no easy task. In an interview with the Independent, a military source said the army is “doing its best”, but “the terrorists are hiding in between the civilians”.

In a detailed report on the Wahat attack, TIMEP also noted the relationship between state and civilians: ‘Terror groups will continue to pose a threat, particularly in ungoverned areas and where the social contract between citizen and state has been eroded.’ “The fate of civilian populations certainly tends to be an afterthought, and in North Sinai the populations are generally regarded with suspicion, as potential terrorists,” McManus said. However, she said there are “rumours” that the relationship between civilians and security personnel is changing “slowly but surely”.

In a best-case scenario, the horrific mosque attack will create a backlash against IS, which the state could capitalize on by improving relations with civilians and ensuring local support. A first indication in this direction was a statement issued by a collective of local Bedouin tribes in response to the attack, vowing to eliminate IS in the peninsula.

However, a speech given by Egyptian President Abdel Fattah al-Sisi on 29 November 2017 struck a less hopeful tone. He gave his newly appointed military chief Mohamed Farid Hegazy three months to secure and stabilize North Sinai, saying, “You can use all brute force necessary.” 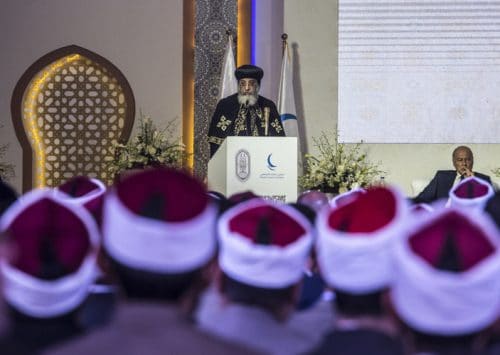 Combatting Radicalization in Egypt: the Gap between Theory and Practice
Egypt’s strategy to combat these groups has primarily relied on a security crackdown – specifically on the Muslim Br...