‘To Build It’ is the name of a campaign launched in September 2017 to urge Egypt’s President Abdel Fattah al-Sisi to run for a second term in the 2018 elections.

Several members of parliament and political parties initiated the campaign, collecting signatures for a petition demanding that al-Sisi run again, which he is widely expected to do.

The campaign has so far drawn broad support from public figures inside and outside the political arena. Among them are many names from the entertainment industry, including famous actors and singers.

Egyptian media have reported several times on actors signing the petition. Egypt Today, which is affiliated with the notorious pro-regime Youm7 newspaper, wrote, ‘The To Build It campaign has attracted a vast turnout from leading figures,’ and published pictures of famous actors including Hany Salama and Wafaa Amer signing the petition.

Figures from the film and music industries have a long history of supporting the regime. During the 18 days of demonstrations in 2011, several actors and musicians spoke out in favour of Hosni Mubarak, then president, and against the protesters in Tahrir Square. After Mubarak stepped down, activists put together a ‘blacklist’ of actors who had supported the regime.

Veteran actor Hussein Fahmy, famous in the 1960s and ’70s for movies such as Watch out for ZouZou, has also signed the petition. “President al-Sisi has not declared yet that he will run, so we are trying to push him to do so,” Fahmy told Fanack chronicle.

He believes al-Sisi has made major steps in the development of the country and should serve a second term to complete the projects he has started. These include building a new administrative capital to the east of Cairo, constructing major power plants and reclaiming large swathes of desert for agriculture.

Fahmy has an explanation for the strong support from the entertainment world. “People in the business are aware of what [al-Sisi] is doing and are deeply concerned about what is happening in the country. We expect al-Sisi to run,” he said, adding that he has not seen any other credible candidates.

So far, member of parliament Mohamed Anwar Sadat, the nephew of former President Anwar Sadat, and human rights lawyer Khaled Ali have hinted that they may run. “Old faces don’t bring change. Al-Sisi has been a new face since the 30 June revolution,” Fahmy said, referring to the mass protests in 2013 that led to the ouster of President Mohamed Morsi by al-Sisi, then an army general.

Al-Sisi won 97 per cent of the votes in the 2014 presidential elections, which were criticized by observers from Democracy International and the European Union for falling short on democracy standards. “People always say the elections are not fair. The last one was fair, and the coming one will definitely be fair,” Fahmy said. “No one benefits from unfair elections.”

Regarding accusations of human rights violations often levelled against the regime, Fahmy said, “I believe in the rights of law-abiding citizens to live in peace, not in human rights for terrorists.” However, his sentiments are not shared by everyone in the industry.

Egyptian actor Amr Waked frequently posts tweets that are critical of the regime. In July 2017, he tweeted, ‘You can ban movies, books and opinions […], but you can never ban an idea,’ followed by the hashtags #25January and #18days, referring to the start date and length of the 2011 revolution. He also criticized the transfer of two Red Sea islands to Saudi Arabia and the forced evictions of inhabitants of Warraq island in the capital Cairo.

To understand the dynamics of the entertainment industry, one must take a closer look at the role production companies and syndicates play.

Moreover, these companies depend on the security agencies to shoot scenes in public places and on the censorship committee of the Ministry of Culture to screen their movies. “Production companies will not take the risk of dealing with a movie star, scriptwriter or director who is red-flagged by the regime,” Youssef said.

As an example, he gave the recently released Egyptian film The Last Days of the City, which is critical of the Mubarak regime and has been censored in Egypt. “No distribution company will risk screening this film.”

In general, the cultural space has been shrinking in Egypt in recent years. In August and September 2017, authorities closed the al-Balad bookstore, which was owned by the leftist opposition party leader Farid Zahran, the al-Karama library owned by lawyer Gamal Eid and the Alef bookstore, the latter over alleged ties with the banned Muslim Brotherhood.

Women’s rights activist Sondos Shabayek told Fanack chronicle in June 2017 that it is becoming harder to find a venue to perform her theatre pieces, which address social taboos such as female genital mutilation, pre-marital sex and sexual harassment. Venues are increasingly wary of allowing performances without first getting official permission, she said.

The syndicates for people working in film and theatre also wield significant influence, which is regularly used to push a pro-government line.

The Actors Syndicate banned actor Ahmed Malek from working after a prank video was shared on social media in January 2016. In the video, Malek distributed condoms blown up like balloons to the police in mock celebration of National Police Day, which coincided with the fifth anniversary of the 2011 revolution.

The Musicians Syndicate was the first to ban the Lebanese band Mashrou’ Leila from performing in Egypt after a rainbow flag, associated with LGBT rights, was raised during their concert in Cairo in September 2017.

The student, who participated in protests during and after the 2011 revolution, believes that artists sign the petition to curry favour with the government. “The government has a hand in everything,” he said. Artists anticipate that signing will help their careers, and perhaps even more so, fear that not signing it will jeopardize their careers.

Amr Waked, for instance, has been increasingly marginalized. He rarely gets television interviews and receives only minor roles, which the student believes is because of his critical stance. Moreover, Waked was handed a three-month prison sentence in October 2017 for damaging a parked car, in a case that his lawyer hinted may be related to his vocal opposition.

“There are also artists who genuinely believe they are doing the right thing [by signing the petition],” the student added, “and that is perhaps an even bigger problem.” 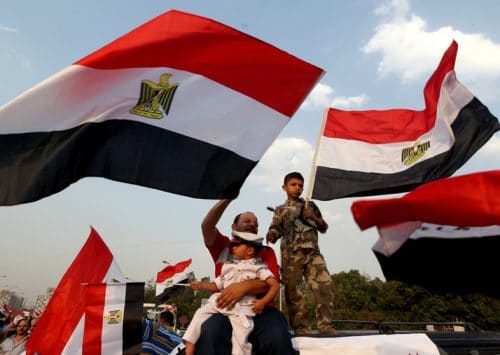 CRIS BOURONCLE ©AFP
CRIS BOURONCLE ©AFP
MOHAMMED ABED ©AFP
"Ignorance leads to fear, fear leads to hatred, and hatred leads to violence.
This is the equation."
IBN RUSHD/AVERROES (1126 – 1198)
We are a Dutch not for profit organisation (NGO), financed solely by individuals who share our belief in the importance of publishing and disseminating reliable, unbiased information on the Middle East & North Africa region. To represent the voice of the region’s people, we carefully echo the region’s heartbeat by offering fact-checked and therefore credible information.
Your support is greatly appreciated and helpful!
Donate