From Ancient Times to the British Colonialism

Civilization in Egypt has always been related to the River Nile. Nomadic tribes settled along the banks of the river, eventually leading to the creation of two separate states:

Lower Egypt, currently known as the Delta. It was the early Egyptian ruler Narmer – who is identified by some experts as the mythical King Menes – who is said to have merged the two states in about 3100 BCE and set up his capital in Memphis, some 25 kilometres south of present-day Cairo.

Narmer and his successors introduced the era of the unprecedented civilization of the ancient Egyptians. For three millennia the land was ruled by more than thirty dynasties.

Pharaoh Djoser and his famous architect Imhotep built the first Step Pyramid at Saqqara in the 27th century BCE. In the following ages, the construction of pyramids as tombs for the pharaohs became more refined and ultimately led to the building, on the Giza plateau, of the Great Pyramid of Khufu (Cheops), the only surviving monument of the Seven Wonders of the Ancient World. 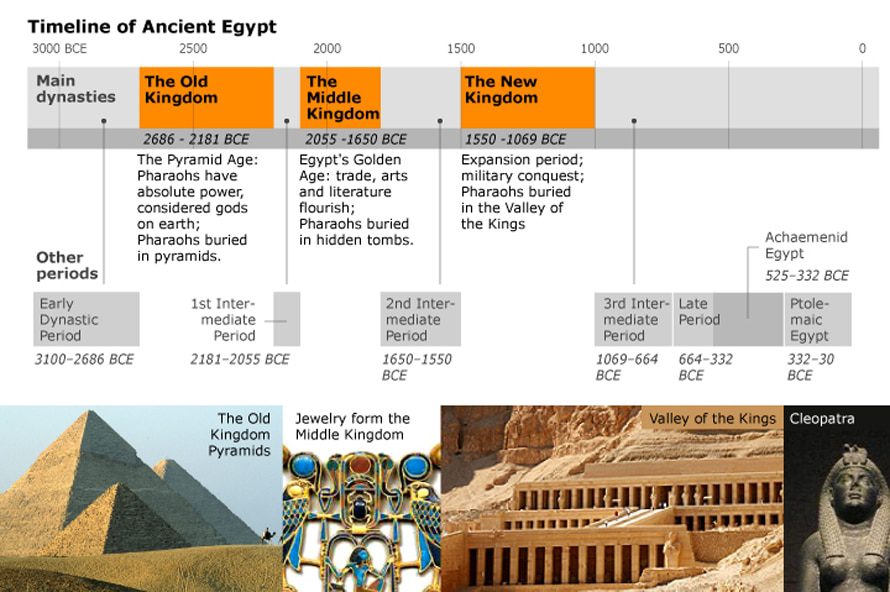 The unified rule in the Old Kingdom was followed by centuries of rivalry, anarchy, and chaos. Only in 2050 BCE did Nebhepetre Mentuhotep II reunify the whole country, founding the Middle Kingdom. Trade routes were re-established and military campaigns into Nubia, Libya, and the Sinai resumed. Later generations launched expeditions as far as the Land of Punt and present-day Ethiopia and Somalia. At first, the capital was re-established in Memphis, but later the administrative centre was in the Fayyum, an oasis south-west of present-day Cairo.

The pharaohs lost control over Nubia and the Delta to foreign rulers known as the Hyksos, who were probably descendants of the slaves who were brought in during the late Middle Kingdom. It was Ahmose I who expelled the Hyksos from Egypt in about 1550 BCE to found the New Kingdom, a period of stability, wealth, and expansion.

Thebes, modern day Luxor, was the capital of the New Kingdom. Temples, tombs, and statues were erected to symbolize the godlike power of the pharaohs.

Eventually, Egypt succumbed to increasing pressure from foreign invaders and domestic instability. Persian forces invaded Egypt in 525 BCE and gained control over the country. The new city Babylon-in-Egypt was founded near Memphis, now known as Coptic Cairo. The country remained under Persian control until 332 BCE.

Ramses II (‘the Great’) is probably the most famous pharaoh in Egyptian history. The third ruler of the 19th dynasty is known to have been the most successful warrior king of all. A vast number of monuments, statues, and temples, many usurped from earlier rulers, testify to Ramses’s greatness. His fight against the Hittites, known as the Battle of Qadesh, is celebrated in the hieroglyphs and decorations on countless stone walls. But some see in these monuments, many of them now major tourist attractions, not just the evidence of a great ruler but also the characteristics of a megalomaniac. Ramses II is thought to have reached the age of 90 years.

When the Persian Empire was defeated by Alexander the Great, Egypt became part of the Greek sphere of influence. Alexander stayed in Egypt only briefly, but he left a profound mark. He founded the city of Alexandria on the Mediterranean coast, which remained a cosmopolitan centre of enlightenment for centuries.

After his death, Alexander’s Macedonian generals divided the empire, leaving Egypt to General Ptolemy, the first of the Ptolemaic dynasty to rule Egypt, in 332 BCE. Greek became the official language, and Hellenistic ideas were reflected in Egyptian art, religion, and technology.

Roman Rule and Rise of Christianity 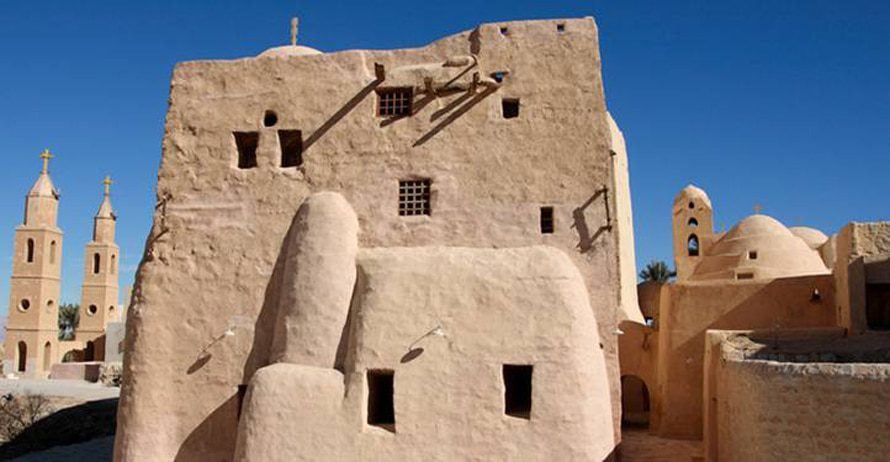 The Egypt played an important role in the Roman Empire as a supplier of grain. During the rule of Nero in Rome, according to Coptic Christian tradition, Christianity was brought to Egypt by Saint Mark, who converted many to the initially banned faith before eventually establishing the Patriarchate of Alexandria in 61 CE.

The schism in the Church in the 5th century led to diverging branches of Christendom, and Copts were persecuted severely by the Roman Christians. The Coptic Patriarchate of Alexandria has always served as an independent seat of the Coptic Pope, completely separate from the Vatican in Rome.

Arab-Muslim forces from the Arabian Peninsula, led by Amr Ibn al-As, defeated the Byzantine army in 636 CE, during the reign of Umar Ibn al-Khattab, the second caliph (literally, ‘successor’) after the death of the Prophet Muhammad. Commander Amr Ibn al-As conquered Egypt city by city and built his capital Fustat, north of what is now known as Old Cairo. Egypt became a province in the vast Islamic empire that was ruled from Damascus and later Bagdad. As in Roman times, Egypt’s main role was as a producer of food. During the following centuries, Egypt was gradually Arabized and Islamized.

The Fatimid caliphs ruled an empire that included North Africa, Sicily, Syria, and the western part of the Arabian Peninsula – in fact, half of the Muslim world at its peak. As Egypt was at the centre, the caliph built a new capital in 969 CE, the city of al-Qahira, Cairo, the Conqueror. The city featured palaces and the mosque-university of al-Azhar, the oldest Islamic school of learning still in existence.

The Fatimids’ friendly relations with the Byzantine Empire during its campaign against Latin Christians and the destruction of the Church of the Holy Sepulchre in Jerusalem supposedly provided the pretext for the crusades, although in reality Christian expansionist politics were in sway. Egypt became a target of the Crusaders in 1167, but Salah al-Din ibn Ayyub (1138-1193), also known as Saladin, put a stop to this.

Saladin became ruler of Egypt after the death of the last Fatimid caliph in 1171. He declared himself sultan (literally, ‘authority’), a secular title, rather than caliph. Known for his personal modesty, generosity, culture, political capability, and, not least, his success in repelling the Crusaders, Saladin later became a legend in Arab history. After Saladin’s death, his successors in the Ayyubid dynasty kept Egypt a union, in contrast to the eastern territories. The Ayyubids became increasingly dependent on an army of Turkish-speaking slaves from the Black Sea region. One of those slave-soldiers, Baibars, also known as the Crossbowman, eventually seized power and introduced the era of the Mamluks.

Mamluk emirs (military leaders) controlled Egypt for three centuries characterized by intrigue, infighting, and assassinations. Egypt again came under threat from a foreign invasion when the Ottomans to the north consolidated their power by defeating the Shiite Persians and conquered Mamluk territory in Syria. The last Mamluk sultan, Tuman Bay, was executed in Cairo by the Ottomans in 1517.

An ensuing power struggle within Egypt was won by Muhammad Ali (1769-1849), an Albanian officer in the Albanian Corps of the Ottoman army. The Ottoman sultan acknowledged him as pasha in 1805, as he proceeded to rid Egypt of remnants of the Mamluk power structure. Muhammad Ali is regarded as the founder of modern Egypt. Though officially a vassal of the Ottoman sultan, he administered Egypt independently, confiscating private lands, introducing modern technology from Europe, building railways and factories and digging canals. Muhammad Ali was also the first in centuries to build an army consisting of Egyptians, instead of depending only on Mamluks. Ali’s expansion and ambition to control parts of Syriaput him in direct confrontation with the British and the Ottoman Empire. Towards the end of his life Muhammad Ali was forced to sign a treaty confining his power to Egypt. He died in 1849.

His grandson, Said Pasha (1822-1863), granted a concession to French engineer Ferdinand de Lesseps to dig the Suez Canal (Port Said, at the northern end of the canal, is named after him). By the time it was completed in 1869, Egypt was drowning in its debts to European lenders. To stave off bankruptcy Khedive Ismail (1830-1895), leader of Egypt at the time, was forced to sell his Suez Canal shares to the British government.

The Digging of the Suez Canal

It took ten years to dig the almost 193 kilometre long Suez Canal (1858-1868). During the whole project a total of 1.5 million laborers were involved. At any given moment 30,000 men were at work, many of whom died as a result of accidents and diseases.

Turkish conquest transformed Egypt into a province of the Ottoman Empire. The administration was in the hands of officials trained in Istanbul, known as pashas, who had to ensure that taxes were collected and delivered to Istanbul. The Mamluks remained powerful figures in the army and the administration of Egypt.

Egypt became a pawn in the struggle for power between France and Britain when Napoleon wanted to gain control over Egypt in order to disrupt British commerce and eventually overthrow British rule in India. His fleet landed in 1798 in Alexandria, where he declared his intention to liberate Egypt. While Napoleon succeeded in occupying Cairo, the British navy, under Admiral Horatio Nelson, thrashed his fleet at the Mediterranean port of Abu Qir Bay. 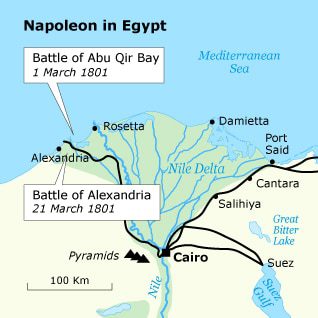 Britain became increasingly involved in Egypt as it was transformed into an economic colony, importing all manufactured goods from Britain and being forced to grow cotton to export. Farmers had to take out loans, plunging them into bankruptcy when cotton prices fell and forcing them to sell their land to wealthy landowners. British colonial personnel were brought in to replace the local officials, exacerbating local resentment and inspiring a nationalist movement.

Despite British domination, Egypt was, on paper, still a province of the Ottoman Empire. When Turkey allied itself with Germany in 1916 during the World War I, Britain declared Egypt its protectorate.

As a result, the nationalist movement grew stronger, and nationwide riots forced Britain to abolish the protectorate in 1919, when Egyptians rose up in a widespread protest against British occupation. The leader of that uprising, an Egyptian lawyer named Saad Zaghloul (1859-1927), was nominated to head a delegation of Egyptians to negotiate with the British the terms of an end to their occupation. Sultan (later King) Fouad I (1868-1936), a descendant of Muhammad Ali, was crowned King of Egypt, but Britain recognized Egypt as an independent state on paper only in 1922. The legal system, communications, defence, and the Suez Canal all remained under British control. King Farouk, who came to the throne in 1936, signed a 20-year Anglo-Egyptian treaty, ending British occupation but granting British forces permission to remain in the Suez Canal Zone.

In World War II, Egypt proved vital as a British base in the Middle East against German advances. The Western Desert became the Egyptian battlefield. The Afrika Korps of German General Erwin Rommel (1891-1944) came within 111 kilometres of Alexandria but was halted and driven back by the eighth Army under General Bernard Montgomery (1887-1976) at the Battle of Alamein in October 1942.

After the war, anti-British riots and strikes led to clashes. Faced with growing hostility, British troops were evacuated from Alexandria and the Canal Zone in January 1947. In 1948, Egypt joined Iraq, Syria, and Jordan in a military campaign against Israel, which had been declared a state in May of that same year. To the astonishment of the masses, the Arab forces were defeated; many Egyptian officers were disgusted by the incompetence of their superiors.