Egypt has one of the most established and influential media industries in the Middle East. The origins of the modern media can be traced back as far as 1828, with the introduction of the printing press and establishment of the country’s first newspaper al-Waqi’a al-Misriya, and later in 1875 al-Ahram, the oldest in the Arab world. Under British occupation in the 1930s, Cairo became the focal point of Arab publication and broadcasting, with its growing press industry and the commencement of radio programming.

Egypt’s monarchy was overthrown by the Free Officers Movement in 1952 and in 1956 President Gamal Abdel Nasser came to power. Nasser, who ruled from 1956 until 1970, initially made extensive use of transistor radio technology to spread his pan-Arab ideology across Egypt and promote his charismatic image. Cheap transistor radios were distributed among the Egyptian population in the early 1950s and Nasser regularly gave lengthy speeches to announce political developments throughout the decade. The post-independence era saw the establishment of a new batch of popular newspapers, the country’s first publications independent of colonial rule. President Nasser nationalized the press in 1960, coinciding with the introduction of state television broadcasting. Just over a decade later, in 1971, the Egyptian Radio and Television Union (ERTU) was established under Nasser’s successor, Anwar Sadat (ruled 1970-1981). Subsequently, the Egyptian state has effectively maintained a monopoly over terrestrial television broadcasting, and has allowed a minimal degree of private radio ownership.

Egypt under President Hosni Mubarak (1981-2011) launched the first Arab satellite channel, the Egyptian Satellite Channel, in 1990. In 1998, the Egyptian government launched its first satellite, Nilesat, consolidating its position as a news and entertainment distributor across the Middle East. Since its introduction, television has remained Egypt’s most influential and accessible media format in terms of penetration, with 94 per cent of households owning a television set in 2010. Furthermore, 59.7 per cent of households had satellite reception in 2009, almost double the figure (32.5 per cent) from 2005.

The 2011 popular protests and ouster of President Mubarak initially suggested Egypt’s media landscape would change considerably. The state media apparatus had been challenged throughout the 21st century by the rise of social media and online publishing, and the immediate post-change environment signalled hope for traditionally marginalized sections of society, such as the Muslim Brotherhood, to air their voices in a more open media environment. However, Egypt’s post-2011 media experience both under elected Islamist President Mohamed Morsi (2012-2013) and even more so after army commander general Abdel Fattah al-Sisi took power in 2013, has been characterized by harsh restrictions upon freedom of expression and a return to a culture of enforced obedience in the print and television industries.

The Egyptian government’s track record of curtailing media freedoms has damaged the country’s reputation among international freedom of expression watchdogs. It was ranked 159th of 179 countries in Reporters Without Borders’ 2016 World Press Freedom Index. The Committee to Protect Journalists also designates it the ‘second worst jailer of journalists worldwide’, reporting that 23 journalists were in prison in 2015, although the Egyptian Press Syndicate (EPS) claims the actual figure is at least 32.

There have been many documented instances of curbed freedom of expression under al-Sisi, most infamously with the detention and imprisonment of three al-Jazeera journalists between 2013 and 2015 for reporting ‘false news’ deemed damaging to national security. The case received international coverage and all three were eventually released, with al-Sisi pardoning the final two journalists in September 2015.

Yet violence against and harassment of Egyptian media figures remains common, with Egyptian NGO The Association for Free Thought and Expression (AFTE) chronicling 134 violations committed by Egyptian police against journalists in the first half of 2016. In May 2016, the Egyptian Press Syndicate (EPS) was stormed by security officials, after it was disclosed that two journalists who had criticized the government, Mahmoud el-Sakka and Amr Badr, were taking refuge there. In addition to the two wanted journalists, the head of the EPS was arrested along with two colleagues and charged with ‘harbouring suspects’ and ‘publishing false news’. They were later sentenced to two years in prison. Badr and el-Sakka have since been released on bail pending investigation.

The events at the EPS are characteristic of the repressive media environment under President al-Sisi. Several journalists continue to be detained for lengthy sentences, including Mahmoud Abu Zeid, a photographer arrested in 2013 for documenting violent confrontations between Egyptian security forces and protestors. Abu Zeid is still being held and is also reportedly being denied access to medication to treat his hepatitis C. This unrelenting crackdown on freedom of expression continued in May 2016, when another photographer, Ali Abdeen, was sentenced to two years in prison after he photographed protests against the mooted sale of two Egyptian islands to Saudi Arabia.

State censorship is also prevalent, but self-censorship has grown increasingly common. As the Committee to Protect Journalists state, ‘most censorship now comes from a zealous state-aligned media establishment’. This was exemplified in October 2014, when 17 editors-in-chief of prominent state-owned and independent newspapers signed a ‘loyalty pledge’ to refrain from press criticisms of the police, judiciary and armed forces, ostensibly to allow the Egyptian government to focus fully on combatting terrorism.

Egypt’s new anti-terror legislation, enshrined by President al-Sisi in August 2015 following the death of the chief public prosecutor in a car bomb attack a month earlier, has led to the increased stifling of human rights in the country. Aside from affording greater protection to military and police personnel who use force ‘in performing their duties’, the law also stipulates that journalists can be fined for contradicting official accounts of ‘militant attacks’. The Cairo Institute for Human Rights Studies states that the law undermines the ‘freedom of the press, opinion,

Television is the most popular platform for disseminating news and entertainment in Egypt. The government has maintained a monopoly over terrestrial broadcasting since its introduction in 1960, and there are no private terrestrial television channels in the country. Satellite television has allowed for a limited degree of alternative viewpoints to be aired, with President Mubarak establishing a free media zone in 1997 to pave the way for private Egyptian satellite channels. However, private channels based in Egypt very rarely oppose the government, given that almost all are carried by the state-owned Nilesat. The following is an overview of Egypt’s television environment:

Following the overthrow of President Mubarak, the transitional government adopted a relaxed approach to licensing television channels and approximately 20 private satellite channels subsequently launched. These included channels affiliated with the Muslim Brotherhood and opposition political parties such as al-Wafd. However, since President al-Sisi assumed power in 2013, his government has shown little tolerance for opposing views and the Muslim Brotherhood, which has been declared a terrorist organization, and other Islamist opponents have now relocated their media outlets outside the country.

The viewership of Egypt’s state-owned channels is declining whereas the ubiquity of satellite broadcasting has allowed overseas broadcasters to gain significant market shares. A 2010 ERTU survey ranked Qatar-owned al-Jazeera as the ‘top news provider in Egypt’. However, following the events of 2013 and accusations of the channel’s alleged bias toward the Muslim Brotherhood, al-Jazeera’s popularity has declined markedly. Conversely, Saudi-funded al-Arabiya supported President al-Sisi’s rise to power and has subsequently enjoyed a ratings boost. Its parent company launched a dedicated Egyptian channel, MBC Masr, in 2012.

Radio remains a popular medium in Egypt, with 19 per cent of the population listening to radio on a daily basis in 2009. The radio environment in the country is as follows:

Newspaper circulation in Egypt is small in comparison to the country’s population size of 92 million (in 2016), with estimates of a nationwide daily print circulation of between 2-3 million newspapers in 2012. This is potentially due to Egypt’s high illiteracy rate, with 24 per cent of Egyptians aged over 15 classified as illiterate by UNESCO in 2015. Newspaper publication increased significantly following the 2011 revolution. In 2010, there were 142 registered newspapers in the country, and this figure had increased to 567 by 2012, broadly divided into state-sponsored publications, privately owned newspapers or those affiliated with particular political parties or institutions. The following is an overview of the Egyptian press:

The editors of state-owned newspapers are appointed by the government. The first three publications are among the most popular in Egypt.

A third of Egypt’s population are daily internet users and social media usage has increased notably since 2011, particularly in light of its perceived role in Egypt’s uprising. The Open Society Foundations note that Egypt’s registered Facebook users increased from 4.1 million to 8.55 million between January and September of 2011 alone.

In light of social media’s widespread appeal among internet users, state authorities have attempted to impose restrictions on this emerging media environment. In 2014, a leaked Ministry of Interior proposal outlined plans to establish a system of mass surveillance across social media platforms.

As yet no formal system has been implemented, although the Egyptian government is known to use surveillance malware. The Egyptian High Council for Cybersecurity was established in 2014, ostensibly to protect the country’s interests from outside electronic attacks, although domestic activists have voiced fears that they too are being monitored.

In 2015, Egyptian authorities blocked Facebook’s Free Basics service, designed for countries with large populations but limited internet connectivity, on the grounds that the company refused to allow the Egyptian government to conduct surveillance.

The country’s controversial 2015 anti-terror legislation also stipulates punishments for what the authorities consider ‘online crimes related to terrorism’ and in 2016, two Facebook users were arrested for managing multiple pages that supported the Muslim Brotherhood.

Egyptian bloggers have been active since 2004, and the nascent online environment became known for its outspoken criticism during the reign of President Mubarak. As authorities recognized the popularity of online publications, they have been subject to significant censorship. In 2015, Freedom House remarked that ‘the Egyptian blogosphere has lost much of its vitality over the past few years’.

Online news sources increased rapidly following the 2011 revolution, often utilizing citizen journalism to provide unique insights into Egypt’s transition. One source, Rassd News Network (RNN), became popular among international media outlets covering the revolution due to its exclusive footage. However, when RNN covered protests against the ouster of President Morsi in 2013, both the executive director and the co-founder of the website were arrested. They were sentenced to life imprisonment in 2015. 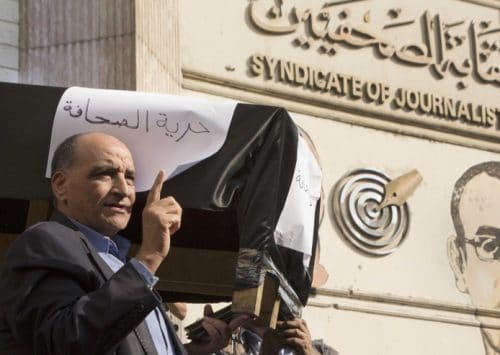 Egypt’s Propaganda Machine
The government has succeeded in building a strong base to control journalists and the media in Egypt. Many have fallen in line, and often are rewarded for doing so. Those who try to resist are frequently harassed, with allegations... 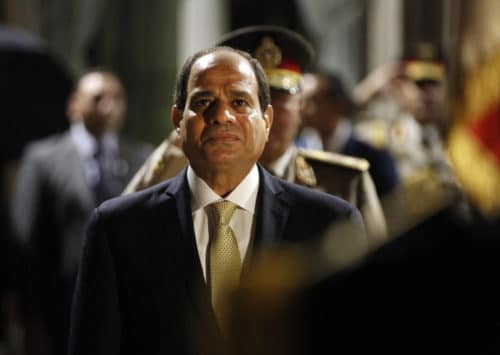 Egyptian Government Expands Control to Social Media with New Press Laws
Social media users with more than 5,000 followers are subject to charges such as ‘spreading false news’ and ‘inciting against the state. However, several hundred journalists signed an online statement rejecting the laws, spe... 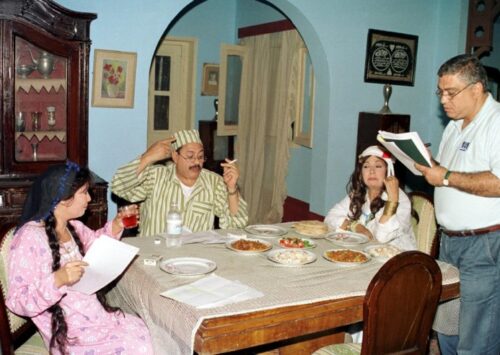 History of Egyptian Radio and Television Series
The drama industry in Egypt is significant, consisting of millions of workers, technicians, actors, writers and directors. Nearly 40 series were produced in 2018 alone. However, the increasing government control of the Egyptian me...