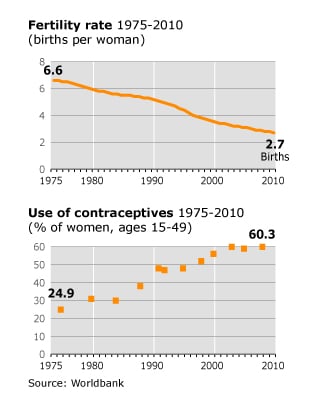 The so-called gender gap is slowly narrowing in Egypt. There have been substantial improvements in female literacy rates, school-enrolment rates, labour-force participation, and employment.

Particularly in education women are making great strides. Of the total number of women older than fifteen, only 22.7 percent have had a secondary education, but among those of school-going age the enrolment rate is 70 percent. Women now sometimes surpass their male counterparts in absolute numbers. While women made up only 31 percent of university graduates in 1996, their proportion increased to 52 percent in 2006. From primary education to university, roughly half the students are now females.

Despite these gains, Egypt’s ranking on gender empowerment is, according to the UNDP, still among the lowest. Women in Egypt score poorly in economic participation, economic opportunity, political empowerment, health, and well-being. The scores on most of these criteria have been improving over the years, but they still lag behind the scores for males. For instance, women represent only 22 percent of the total labour force, and the unemployment rate for women is four times higher than unemployment rates for men (24 percent vs 6.8 percent). 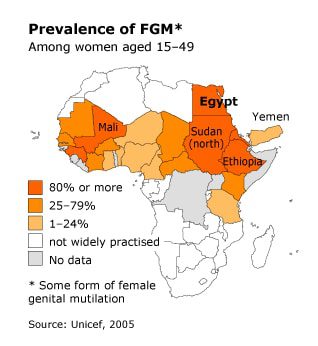 Under Mubarak, efforts were made to increase the number of women in high positions. Before the December 2010 elections for the People’s Assembly, the government amended the law and granted women the highest quota ever of parliamentary seats, but the 64 seats allocated to women were occupied by supporters of the now-dissolved former ruling NDP.

After the fall of Mubarak the quota system for women was cancelled in the new election law introduced by the Supreme Council of the Armed Forces (SCAF). The new election law is based on the party-list system, which obliges each party to include at least one woman among the top five name in its list of candidates. Due to the growing influence of fundamentalist Islamic groups, women have however almost always failed to win parliamentary seats in elections. Any future President will thus probably select women for the ten seats he is entitled to appoint ten members in Parliament. Traditionally, those seats go to women and Coptic Christians. In 2007, the first female judge was appointed to the Supreme Constitutional Court.

In human rights, Egypt scores low on gender equality. Freedom House gives Egypt only 2.3 out of a maximum seven points for ‘gender equality’. Often, men and women enjoy different rights under Islamic jurisprudence. A woman inherits half of what a man does, and divorce can be difficult if the husband refuses. As a solution, Egypt adopted the so-called Khula Law in 2000, which gives a woman the right to divorce her husband over his refusal. This law has come under attack since the Islamist takeover.

According to the Carter Center, women were underrepresented in the 2011 parliamentary elections. The number of women eventually elected is considered a serious concern: out of the total of 628 seats, only 14 were taken by women. The new cabinet of President Morsi continues the tradition established by Mubarak of including only two women. Under Morsi, these are the Minister of Insurance and Social Affairs and the Minister of Scientific Research. Out of the seventeen presidential consultants, two are women.

Domestic violence against women is widespread, and Egypt has a high rate of female genital mutilation (FGM). Although the government has banned the practice since 1996 (except for health reasons), UNICEF statistics show that 97 percent of Egyptian women between the ages of 15 to 49 have been subjected to some form of FGM; 47 percent of mothers have at least one mutilated daughter.

FGM is an ancient custom of African origin and is practiced by both Muslims and Christians in Egypt, despite its explicit rejection by the Coptic papacy and al-Azhar (although there are some Islamic scholars who do not share this opinion).