Fanack Home / Enkidu for Music Dies and Does not Rise

The Epic of Gilgamesh comes in two epochs, the Sumerian and the Babylonian, Enkidu’s death is different in each, two musical instruments killed him in the first.

The artistic creation is a realization of the aesthetic desire rooted in the soul and human biology. It is the fulfillment of a practical and immediate utilitarian need, and a view of the human problem. A work of art could rarely go beyond the limits of time and space like “The Epic of Gilgamesh” did. Four thousand years after being written in Mesopotamia, people of various cultures all over the world keep reading this epic, as if it was written last night. Firas al-Sawwah* was the researcher that knew Gilgamesh the most. According to him, Gilgamesh** is a man who fought the gods to bring us the secret of life, the mystery of death and the secret of living in this short life. He traveled for too long till he reached the setting of the sun. Moreover, he walked through the underworld in the path of the sun to its rising place. He crossed the seas of death, explored the land of gods and descended to the depths of the great ocean so that he may bring us an endless treasure. According to al-Sawwah, the valuable treasure that Gilgamesh has placed in our hands is not an easy answer to the most difficult issue: the secret of life and the mystery of death. He died for the sake of the treasure and wanted us to endure as he did to open his chest for us. That is why the epic has remained, since the discovery of its first tablet fragments in the middle of the last century. That’s why it kept preoccupying scholars of ancient languages, ancient mythology, literature, and anthropologists of various trends.

The Epic of Gilgamesh comes in two epochs: the Sumerian and the Babylonian ones. Before the Babylonian epic, Gilgamesh was a subject to several Sumerian literary and mythological texts. These texts were written during the last two centuries of the third millennium BCE, which is the period where most of the basic Sumerian literature was written. According to al-Sawwah, there is no doubt that the Sumerian texts of Gilgamesh adopted an ancient oral tradition or were copies of lost ancient origins. The epic was written in six texts, the fifth of which leads to the music story which was in ancient Mesopotamia a sacred element. In fact, music accompanied all religious rituals in and outside the temple. Moreover, it has been sacred and used in different occasions such as celebrations, lamentations, and even in wars. According to the cuneiform texts, music was an important element in events related to preparing priests and clergy, as it was taught in the temple. While tracing the historical stages of the musical civilization of Mesopotamia, it became clear that all the ancient musical instruments of string, wind, and percussion that we have come to know were found during archaeological excavations that took place in the ancient cities of Iraq, such as Ur, Kish, and Nimrud.

In cuneiform texts, many names are mentioned for musical instruments and musicians in both Sumerian and Akkadian languages. Researcher Curt Sachs states in his book “The History of Musical Instruments” the following: “It is well established that all European musical instruments came to us from the East, through several ways. Piano, which is the only instruments that we used to consider as our invention, is proved to be descended from an Arab-Andalusian source. In fact, it was brought up by the Iraqi Ziryab.”

It is not strange that Enkidu*, Gilgamesh’s companion, dies because of two musical instruments. This human who used to be a beast dies in the ancient Sumerian epic differently than in the Babylonian epic that we know. In the Babylonian epic, the Pantheon decides to let Enkidu die for scarifying Gilgamesh. However, that was not the case in the fifth text of the Sumerian epic which is entitled by “Gilgamesh, Enkidu, and the Underworld”.

The story begins with Gilgamesh saving the goddess “Inanna” **, as she has planted a tree in her sacred garden before. Years have passed and the tree grew. However, a giant snake made a home in the base of the tree. A giant bird also landed on the top of the tree, named “Anzu”, while the demon “Lilith” lived in the middle of the tree. Inanna complained to her brother “Utu” the god of the sun. Gilgamesh heard her complaint and thus came for her aid. He wore his armor, carried his ax, went to the tree and killed the snake. Nevertheless, both the Bird and Lilith escaped. After that, Gilgamesh cut the tree and presented it to the goddess. As a reward for his deed, Inanna fashioned two musical instruments for him, one from the base of the tree, named “Pukku”, and the other from the top of the tree, named “Mikku”. The types of these two instruments remain unknown, or maybe they were a drum and a drumstick.

In the fifth text of the epic, the story goes on. After a while from Gilgamesh getting his gift, the two instruments fall in a hole leading to the underworld. So, he grieves, mourns and says the following:

Enkidu hears him and promises that he will bring them back to him:

Before Enkidu descends, Gilgamesh gives him a set of advice and instructions on how to behave in the underworld, so that he can come back safely. However, after Enkidu descends to the land of the dead, he ignores all the instructions that Gilgamesh gave him. He gets caught by the scream of the underworld that takes the soul away. Gilgamesh mourns him and asks the help of the gods to bring Enkidu back to life. After that, the god “Enki” takes pity on Gilgamesh and helps him to see only the ghost of Enkidu. When the two friends meet, Gilgamesh embraces Enkidu’s shadow and asks about how the people in the underworld live. He says the following:

“Tell me about the paths of the world that you witnessed”

Enkidu replies:
“If I must tell you about the paths of the world I have seen,
then sit first and cry.”

Enkidu answers the questions of Gilgamesh, one after the other. Once he finishes describing the conditions of the dead, his soul vanishes. It returns to its eternal rest.

Enkidu died because of two musical instruments that may have been a drum and a drumstick. The reason of his death seems to be more frightening than the one told in the Babylonian epic. Apparently, a fascinating and a “killing” music has been born from that land. It is the music that gives those who hear it a reason to cry and weep. This weep might be over that human whose soul has vanished due to that music. His name might probably be Enkidu.

Sources:
[1] A reading in the Epic of Gilgamesh, Feras Al-Sawah. (Arabic)
[2] The Epic of Gilgamesh, translated and studied by Taha Baqer. (Arabic)
[3] The role of Mesopotamia in the manufacture of musical instruments, Afaq Arabia magazine (Arabic).
[4] Musical civilization in Mesopotamia, Afak Arabia magazine (Arabic).
[5] Magic of the beginnings, Khazal Majidi (Arabic).
[6] The history of Babylon and Assyria, Majmil Effendi Nakhla Al-Madawar (Arabic). 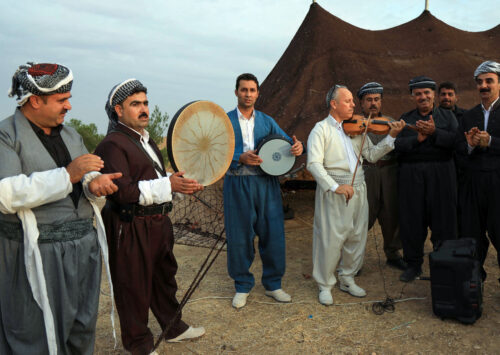 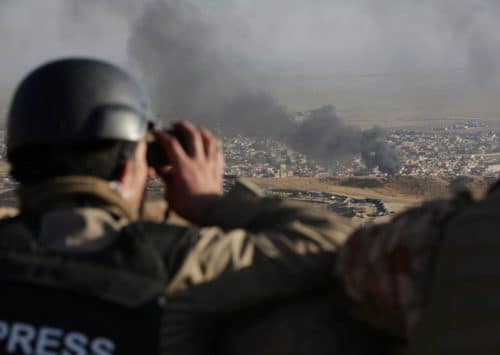