Iran’s Environmental Challenge: How Water is turning into a Crisis

In 2018, the water situation in Iran has turned into a crisis gaining political attention. Accordingly, as protests against water management and distribution have been on the rise for some time, the government seems to be facing a hard task to tackle this decades-long issue. However, the Iranian government has recently started to address the water issue as an immediate threat, because it can be used against the ruling party both by external powers and its own opposition. As such, the Supreme National Security Council (SNSC) was tasked with coming up with resolutions for the supply and distribution of the water after protests swept some Iranian cities. The body violently criticized the government for lacking the will to find solutions to their agriculture and drinking water issues and as such, the Supreme Council for Water held many meetings to technically address the issue. The Iranian parliament’s national security commission has already established a ‘water security’ committee to help with the same issue. This begs the question of why, and how, the water situation became so alarming for Tehran.

Besides the fact that Iran’s water resources are shrinking, Tehran’s sensitivity about the issue is to some extent related to political and security reasons.

In June 2018, Israeli Premier Benjamin Netanyahu addressed the Iranian nation, criticizing Tehran and providing the people with advice on how to manage their water-related problems.

Though this intervention might not be troubling for Tehran, the opposition’s political use of the situation to delegitimize the regime is. 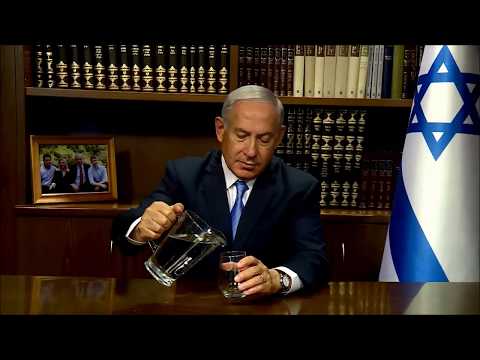 In July 2018, the opposition group People’s Mojahedin Organization of Iran (MEK) tried vehemently to make use of the protests in Borazjan (Bushehr Province) and Abadan and Khorramshahr (Khuzestan Province) to demonize the regime – the first protests was indirectly and the second directly linked to the water issue. This is all happening while Tehran is facing mounting international pressure and the country’s oil income is expected to shrink as a result of US sanctions. In addition, the US made clear that it intends to use internal turmoil to force Tehran to succumb to its demands or force regime change.

Against this backdrop, the water situation comes up as a security issue and a political tool. And the urgency to tackle it forces Tehran to move rapidly to prevent any manipulation by foreign powers and the opposition. But to resolve the issue, Tehran needs time – a precious good available for a high price. To envisage Tehran’s options, one needs to see the roots of the problem. Iran’s water crisis is a result of two major issues, alongside some minor issues.

The first problem is climate change. Iran’s rainfall has fallen down its previous average in the past decade. Iran has arid or semiarid climates, mostly characterized with low rainfall and high potential evapotranspiration. Precipitation in Iran averaged 18.72 mm from 1901 until 2015, and decreased with time: it reached 16.97 mm in November 2015. And despite ups and downs, it is a fact that Iran’s precipitation has fallen especially during the past six to seven years. As a result, droughts have become more common in Iran. Accordingly, severe droughts, plus mismanaged water resources and several dust storms have diminished Iran’s economy in recent years. Additionally, climate change is expected to adversely affect Iran’s agricultural practices through changes in precipitation, temperature and carbon dioxide fertilization. Therefore, the ruling elites of Iran are faced with a severe ecological challenge that, if not addressed properly, can grow very quickly into a security challenge, as recent protests in parts of Iran have already suggested. But Iran’s drought should be seen in accordance with the growth of its population.

The second issue is Iran’s population boom. Iran’s population has been rising slower than the first decade after the Islamic Revolution of 1979. The administration of Hashemi Rafsanjani, who was president of the islamic Republic of Iran from 1989 to 1997, was the first to adopt a family planning policy to reduce birth rates. But by his ascendance, Iran’s population was already on the rise. Around 35 million in 1979, the population had doubled by 2006 but is now stabilizing at around 83 million, and is expected to reach d 90 million in 2035. The Supreme Leader Ayatollah Ali Khamenei is urging the government to stop any sort of family planning, mainly because of the drop in birth rates, which moved down from 6.08 in 1976 to 1.8 in 2006. But it is doubtful his plea will be heard, among other reasons because the population is suffering under economic hardship.

But these two main issues are not the only ones to consider. There are other issues that are, though secondary, as effective and important as the main ones. First, Iran’s poor water management has never been sufficient nor effective in preserving its little rainfall. Second, Iran’s agriculture sector, which is believed to be consuming 90% of Iran’s water resources, is mainly traditional and non-efficient in terms of its outcome. Third, the Iranian life style, which is consumer-oriented. According to Isa Kalantari, the head of the Department of Environment, “if water consumption continues the way it is, Iran will no longer be habitable. We are the most selfish generation in water consumption over the last seven thousand years.” Therefore, these primary and secondary problems are hunting Iran’s environment now and are expected to increase the pressure in the years and decades to come. But besides those issues comes the mounting suspicion with regards to environmentalists. It seems that at least parts of Iran’s security establishment is suspicious about the growing attention to environmental issues. The recent crackdown on environmentalists, including prominent figures such as Kavous Seyed Emami and Kaveh Madani, seems to be part of a plan to stop what they see as a growing ‘soft threat’ on environmental issues. But this doesn’t provide any help to resolve the real problem.

The consequences therefore are of great importance. The sole fact that 11 out Iran’s 31 provinces are to run out of water in half a century should be keeping people on the call up at night.. As mentioned earlier, apart from the ecological and environmental effects, a ‘water crisis’ can easily bring up political and security repercussions. In addition, Iran will be facing internal displacement as well as citizens migrating to other countries in search of a better life, especially the villagers and farmers, who are to be affected the most by the draughts. There is already a huge number of villages vacated entirely in several provinces, especially in the eastern provinces – with one third of Sistan and Baluchestan’s villages entirely vacated. They usually move to major cities where they can find a job. And since average unemployment rates in Iran have been high in recent years, one can envisage the hardship those displaced may face—which can in turn lead to other social challenges. Another issue is the potential internal disputes between different cities and provinces over water distribution. There are many cases in which those disputes turned violent and the government had to use force to restore order.

To tackle the issue with all its ramifications, the Iranian government came up with new policies. Iran’s Ministry of Energy has recently announced a new policy of ‘Water consumption management’ to replace its previous policies of ‘water supply management.’ In other words, it will be insisting on decreasing consumption rather than increasing production. In addition, two policies have been pursued to decrease water consumption in agriculture: first to change the pattern of planting in order to reduce water consumption and increase productivity; second, to encourage greenhouse cultivation that could reduce water consumption while multiplying production. In other words, Iran has to change its traditional pattern of agriculture and move towards new methods.

The Iranian government has also embarked on a campaign of public messaging to encourage Iranians to decrease their water consumption. There were also non-official public campaigns on the issue lately. But those policies are long term projects and the campaigns have not been fruitful enough. Therefore, other policies such as desalination have been considered. But they require investment, mostly FDI, a very rare good in US-sanctioned Iran.

The international community, especially the European Union, should consider assisting Iran in this regard, for Iran’s drought will cause a whole set of issues including, but not delimited to, emigration waves that will effect Europe more than any other region in the world.