The Feminine Face of Al-Assad’s Dictatorship 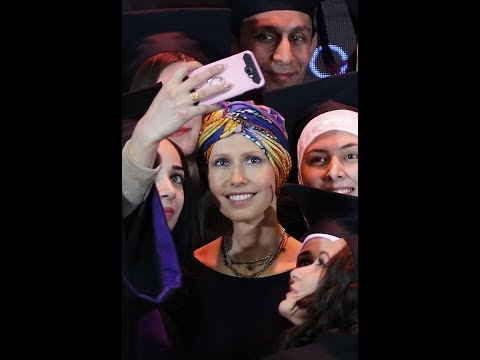 If you rule your country with iron and fire, as Syrian President Bashar al-Assad does, you will need to marry a beautiful and educated woman to be able to market yourself very efficiently. Narratives, documentaries and biographies of the al-Assad family agree that marrying Asma al-Akhras, who studied in UK schools, came to serve that purpose.

Who Is Asma al-Assad?

Asma al-Assad is the daughter of Fawaz al-Akhras, a Syrian Sunni heart surgeon based in London whose family descends from the city of Homs in central Syria. Her mother, Sahar al-Otri, is a retired diplomat who served as First Secretary at the Syrian Embassy in London. Asma was born on 11 August 1975 and grew up in London, where her friends called her “Emma.” She obtained a bachelor’s degree in Computer Science from the Royal College at the University of London in 1996. She received training in banking in New York and then worked as a financial analyst at Deutsche Bank in London, before moving to JPMorgan and eventually becoming Syria’s First Lady.

Asma was introduced to Bashar al-Assad during the latter’s stay in London from 1992-1994, during which he specialized in ophthalmology at a London hospital where Asma’s father worked. She married Bashar secretly after he succeeded his father Hafez al-Assad as Syria’s president. Initially, Asma did not receive much attention from the al-Assad family and did not appear in family pictures with them. Her media appearances eventually grew more frequent and she would be photographed with her husband and their first son, Hafez, and eventually with the rest of their children over time.

The European face and English accent of Asma al-Assad allowed her to play her role as First Lady to the fullest. She accompanied her husband in public six months after he became president and then started to accompany him on his official visits to various parts of the world. Asma abandoned her dream of attending Harvard University to become First Lady and a member of the al-Assad family; her presence was relatively well received inside Syria as well as in Western circles.

Asma travelled to poor Syrian cities, where she launched projects for the employment of women in remote areas such as Jabal az Zawiyah in Idlib; she later established a number of organizations and associations advocating for women’s defence and childcare, the most famous of which has been the Syrian Trust for Development, which serves as an umbrella for a wide range of development projects in Syria.

Asma has used public relations companies to carry out her activities on foreign and political levels. She held a conference for female leaders of the region, similar to what Laura Bush, the spouse of former US President George W. Bush, did and she managed to establish good relations with Sheikha Mouza, wife of the former Emir of Qatar das well as Emine Erdogan, spouse of Turkish President Recep Tayyip Erdogan. ‘ She later dissociated herself from them after the outbreak of the Syrian revolution in March 2011.

In 2002, two years into her marriage, Asma visited London along with her husband on her first official visit to Britain, her second homeland, where she was given a reception fit for a queen at her old school. They met with Queen Elizabeth and former Prime Minister Tony Blair, and both Asma and her husband spoke about terrorism and the need to fight it.

The family published through Asma’s media office a picture of her, her husband and their son Hafez. Another picture was published to show the family celebrating the birthday of one of the children. Ammar Abd Rabbuh, the -family’s photographer at the time, said in an interview for the documentary “The Beautiful Face of Dictatorship,” that these pictures send a message to the world that “we are civilized and open to the world, and we are a European-like family ruling Syria.”

This large-scale campaign to build a bright picture of the ruling family in Syria did not stop, and the campaign sought to send the message that the son of Hafez al-Assad was a president ushering in change and reform in Syria, and so would his wife, who accompanies him to the streets of old Damascus, greets the people spontaneously and receives smiles and greetings from them in a very welcoming and kind way.

Similarly, in 2009, both Bashar al-Assad and his wife were accompanied by a team of photographers in their own car and on their way to attend a show at the Opera House in Damascus. People clapped for them and applauded them as they entered the hall. The couple talked about security and safety in Syria and said that al-Assad’s car was not bulletproof, only to pretend that they represented modern rule in Syria. However, they forgot that the opera house had become known as Dar al-Assad for Culture and Arts, just like everything else in Syria – including names of streets and the entire country, which is referred to as “the Syria of al-Assad.”

After the Madrid bombings in 2004, Asma al-Assad and her husband visited the scene of the bombing and lit a candle for the victims’ souls. At a time when the camps of jihadists moving toward Iraq were based in Syria and jihadists were transported to all Iraqi areas via Syrian territory, the al-Assads said that they were against all forms of terrorism.

A few months later, in February 2005, former Lebanese Prime Minister Rafiq al-Hariri was assassinated and the Syrian regime, specifically Bashar al-Assad, was blamed. Two months later, Pope John Paul II died. Because of the Vatican’s policy of not preventing anyone from participating in the funeral procession, Asma al-Assad accompanied her husband to the Vatican, where everyone refused to communicate with him. However, Asma made her way to speak to the Queen of Spain and the spouse of former British Prime Minister Tony Blair, breaking the ice surrounding her husband, whom she says loves his home and is joyful, especially with his kids.

Al-Assad declared a war against his own people after the Syrian revolution began in March 2011. Asma disappeared from the media and did not give any interviews. She made no statements except through the Syrian Presidency’s official website, where she was shown receiving bereaved women related to Syrians killed while defending the Syrian regime, or accompanying wounded soldiers, academically excellent students, or school children at the beginning of the new school year, to send the message that life was going on normally in Syria despite what was happening outside the walls of her large palace. Leaked correspondence and the exchange of e-mails between her and her husband during the years of the revolution indicated her unlimited support and the fancy life that she lived. She bought her own clothes and shoes for thousands of dollars from world markets via the Internet.

Her first public comment on what was happening in Syria came about a year later in February 2012. She said, “the president is the president of all of Syria, not the head of a faction of Syrians, and the first lady supports him in this role.” Her statement was issued through her official media office at the time. In the same year, the European Union put Asma on a list of sanctioned Syrian individuals in response to the Syrian government’s violent response to the popular protests that swept the country.

Her most recent controversial interview about her positions toward the Syrian revolution took place the day when she received what became known as “Ghouta female fighters” affiliated with the regime forces that besieged Eastern Ghouta in Rif Dimashq, one of the areas that were subjected to dozens of horrible massacres by forces of the regime and those loyal to it. Asma said at the time, “they plaited their hair, postponed their dreams, left their families, wore the military uniform instead of the wedding dress and carried guns instead of books.” Her remarks demonstrated complete disregard for the massacres that these forces committed against civilians there.

The interview, titled “Plaits of Fire,” was preceded by her statement in 2016, which she gave to state-run Russian television, when she announced that she had rejected an offer to leave Syria. Asma’s political views and her rejection of the idea of leaving Syria can be observed in her remarks: “How can I teach my children to love Syria if they do not live there?” In a second interview, she said, “how can I teach my children the civilization and history of their homeland if they do not live in their home and eat from their country’s food? This is impossible. I have been here in the past and in the present and I will stay in the future.” She later said, “as Syrians, we have always been able to win and this stage of our history is not an exception. As it is known, or as it is always said, Syria means ‘the rising sun’, and I assure you that the Syrians will rise again.”

The Syrian Presidency announced in August 2018 that Asma had breast cancer, after which she was treated for an early stage of a malignant tumour, according to official Syrian statements. Asma took advantage of her illness to carry out a series of activities on social media and make various appearances wearing a scarf on her head as one way to demonstrate that she underwent chemotherapy. She participated in World Breast Cancer Awareness Day in a way that was described as spontaneous, engaging in chats with women undergoing cancer treatment at the hospital.

She also appeared with Bashar al-Assad in a restaurant in the centre of old Damascus. All the messages that Asma sent were to say that “Syria is fine,” which has been the same message of the Syrian regime from the outbreak of the revolution until this day.