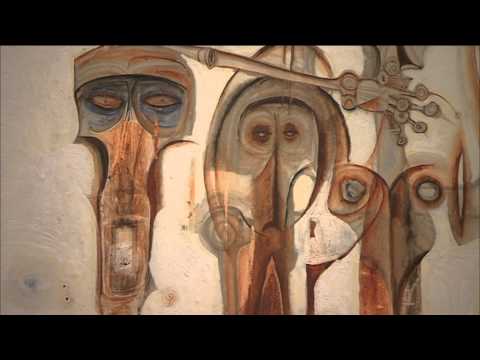 Sudanese artist Ibrahim El-Salahi is one of the most important figures in Arab-African Modernism. Aged 88 and with a 70-year career spanning plastic art, painting, writing and theorization, he is Sudan’s oldest active artist.”

He was born in the city of Omdurman on 5 September 1930 and was educated in the same city. He studied painting and colouring at the Gordon Memorial College School of Design, founded by the British colonialists in the capital Khartoum, and later at the Khartoum School of Art. In the second half of the 1950s, he went to Britain where he spent three years at the Slade School of Fine Art. He then studied photography at Columbia University in New York from 1964 to 1965.

Fellow Sudanese artist and writer Hassan Musa said of him, “It is difficult to summarize the artistic training that El-Salahi received from regular education only because he believes that education is a life practice integrated into one’s existential path in an organic way.” He added, “One who contemplates El-Salahi’s works, whether old or modern, will quickly realize that he has never stopped learning new techniques and styles and exploring new creative visions that are different from his past techniques and styles.”

In his autobiographical book, Handful of Dust, published in 2012, El-Salahi said that after he completed his studies in London, he was shocked to realize that the public had not appreciated his artistic works. He concluded that such a departure was because available art did not express the cultural legacy of the Sudanese people, prompting him to focus on the value of images in Sudanese culture. He began integrating Arabic calligraphy, Islamic symbols and African decorations into his paintings, while employing modern European art techniques. This new visual vocabulary became known as the Khartoum Schools, of which El-Salahi was considered one of the most prominent pioneers.

In addition to popular acceptance, the Khartoum School was officially accepted as well. According to Musa, this was because the authorities “found in it cultural content that would be useful for building national unity” in the newly independent state. “In the early 1970s, El-Salahi became a national icon, and his pictures were posted on the walls of the Ministry of Tourism as Sudan’s national artist,” he said.

British writer Adrian Hamilton said that although El-Salahi was influenced by Western plastic art, the images of his homeland are surprising and impressive. Hamilton described him as a “modernist artist with a vision” and one of the pioneers of the renaissance of African art. He noted that El-Salahi’s paintings “reflect the colours of the Earth and mask-like faces”, which Hamilton described as “something very African”.

El-Salahi was imprisoned for six months (from September 1975 to March 1976) during the reign of former Sudanese President Jaafar al-Nimeiri for alleged anti-government activities. The experience had a major impact on his work. During his months in prison, he would cut food wrappers into small pieces and draw on them with a pencil that he kept secretly. He collected these pieces and created a larger painting with the small paintings embedded in it. 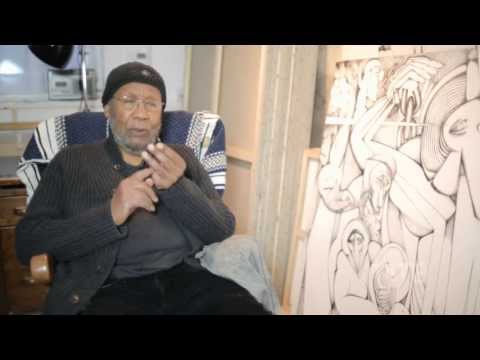 He said that this style was later well received by painters in the West, who saw it as new and inventive. “[The style] was used to express several topics in many works of art that are fitted with detailed components that, to me, were similar to an organic growth of an image.”

His time in prison where he had access only to pencils also led him to pay attention to black and white painting, which was a prominent feature of his work from the late 1970s to the mid-1990s. “I focused on black and white in images, looking for a grey colour … yet I maintained the thickness of black and the purity of white without mixing the two.

Referring to the mystical effect in El-Salahi’s plastic works, artist Husayn Jamaan said: “His works are explained through persuasion, inspiration and interpretation in many philosophical and contemplative frameworks that he imagines and invokes in emotions and that he controls and shows in his powerful style that is highly honest, accurate and perfect.”

For Musa, “The practice of painting for El-Salahi is not limited to the practical aesthetic dimension. Rather, it extends to the intellectual pursuit to establish a philosophical question about the role of an artist in his or her community.”

In his introduction to El-Salahi’s biography, Salah Hassan, a professor of African art at Cornell University, wrote, ‘[El-Salahi’s] fundamental contribution to African modernity in visual arts lies in the continuity of his artistic production, as well as in his influential works in terms of thought and theories. Moreover, his pioneering contributions are attributed to his great legacy as a writer, critic and to his artistic works that have had a strong impact on new colouring and drawing strategies.’ He added, ‘El-Salahi has succeeded in creating his own language and unique colouring applications, leaving a lasting impact on the current artistic scene.’

El-Salahi has held a number of positions and posts. He began his career as a high school teacher. After returning from the Slade School, he worked as a teacher at the Faculty of Fine Arts in Khartoum in the first half of the 1960s, and then as the cultural attaché of the Sudanese embassy in London. In 1969, he was appointed director of the Culture Department at the Sudanese Ministry of Information, in addition to working as director of the National Council for the Care of Culture and Arts. Later, he was appointed undersecretary of the Ministry of Information.

El-Salahi has had dozens of solo exhibitions around the world, and hiss work can be seen in the collections of, among others, the Museum of Modern Art, the Metropolitan Museum of Art, the Chase Manhattan Gallery, all the four, in New York, the Museum of African Art in Washington, the Guggenheim Museum of Abu Dhabi, the Library of Congress, the National Gallery of Sydney, the Gallery of Lambert in Paris, the National Gallery of Berlin and the Cultural Department of Khartoum. He won the Prince Claus of the Netherlands Award in 2001.

Besides painting, El-Salahi is also an acclaimed writer, critic and poet and the creator and presenter of high-quality media programmes. His television programmes in the 1970s, especially House of the Jack, were widely popular in Sudan. In the same period, he made a successful foray into acting, portraying the character of ‘Nostalgia’ in The Wedding of Zein, a film by Kuwaiti director Khaled Siddiq based on a novel of the same name by Sudanese author Al-Tayyib Salih.

In addition to his autobiography, a book titled House of the Jack was published in 2005, which included a lengthy conversation between El-Salahi and the writer Fathi Mohammed Osman. A project sponsored by Cornell University in New York comprehensively documented El-Salahi’s works since 1950s, resulting in two books about his experience in plastic art. This is in addition to another book on his con-versations and discussions with Musa, which lasted for almost 13 years.