is a long-standing and frequently controversial Palestinian politician. He is an outspoken critic of the Israeli occupation and has been detained repeatedly in Israeli prisons. Yet he is also known for coordinating security with Israel and fighting Palestinian resistance to Israel, at the same time as he was serving as head of one of the most important security apparatuses in the West Bank and as Palestinian national security adviser.

Rajoub was born in Dura, near Hebron, in 1953. He is married and has four children. He holds a diploma in security studies from the Russian Defense and Security College and a master’s degree in Middle Eastern studies, which he obtained from the University of Jerusalem in 2009. He has also authored a number of books on security.

In 1968, at the age of 15, he was arrested for the first time by security agency on suspicion of helping fleeing Egyptian officers to escape, and spent four months in prison. Aged 17, he was arrested again for throwing a hand grenade at an Israeli military vehicle. He was convicted of the attack and sentenced to life in prison. During his detention, he studied Hebrew and English. Together with a cellmate, he translated The Revolt by former Israeli prime minister Menachem Begin into Arabic.

After his release in 1985, in a prisoner swap deal between Israel and the Popular Front for the Liberation of Palestine, Rajoub intensified his political and military activities, which soon led to his rearrest. He was arrested for a fourth time for his involvement in the First Intifada, before being deported to Lebanon in January 1988. He later relocated to Tunisia, home to the headquarters of the Palestinian Liberation Organization (PLO) and Fatah, which he had joined following his first arrest.

In Tunisia, Rajoub served as an advisor on the intifada to Fatah deputy leader Khalil al-Wazir. After al-Wazir’s assassination by Israeli intelligence, Rajoub became a close lieutenant to the late Palestinian leader Yasser Arafat.

Following the signing of the Oslo Accords in 1993, Rajoub returned to the West Bank, where he was assigned to establish and head the Preventive Security Force (PSF). In this role, which he held until 2002, he created one of the Palestinian Authority’s (PA) most powerful intelligence agencies. He also sought to make Fatah an organization that was more supportive of the PA.

During his tenure, he was accused of torturing and abusing Palestinians deemed to oppose the Oslo Accords, particularly members of Hamas and the Islamic Jihad Movement. The torture and killing of Muhyi al-Din al-Sharif, a commander in Hamas’s al-Qassam Brigades, and the handing over of ‘the Surif Cell’ to Israel caused public outrage. Rajoub defended his actions, saying that security cooperation with Israel aimed to achieve peace. The PSF was also accused of corruption and taking a heavy-handed approach towards Palestinian citizens and the PA.

Rumours circulated that Rajoub was planning to succeed Arafat, whose health was deteriorating. As a result, Rajoub’s membership in the Fatah Revolutionary Council was suspended in 1997 for eight months until his plans and intentions had been verified.

In March 2002, Israeli troops stormed Arafat’s Ramallah compound and shortly afterwards, the PSF headquarters in Beitunia was placed under a military siege. Four months later, Rajoub was dismissed from the PSF for failing to protect the buildings from the attacks. However, the United States pressured Arafat to reinstate Rajoub in August 2003, this time as an adviser to the Palestinian National Security Council.

In January 2006, Rajoub lost the Palestinian Legislative Council elections, when Hamas members, including Rajoub’s brother Nayif Rajoub, won all the seats in the Hebron district. After his defeat, Rajoub tendered his resignation at the Palestinian National Security Council. 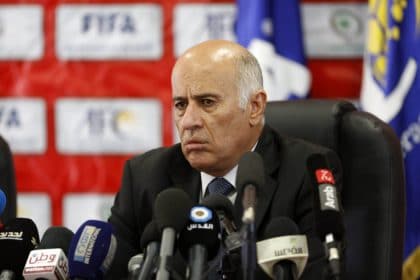 However, he did not stay away from politics for long. He was elected to the Fatah Central Committee at the party’s 2009 congress. He has also used his political clout to advance his sports agenda, including the organization of regular sports tournaments in the West Bank and Gaza and the participation of the Palestinian national team in several international sports events. Moreover, the Palestinian team won the Asian Football Confederation Challenge Cup for ‘emerging’ football nations, qualifying for the finals of the 2015 AFC Asian Cup for the first time in the history of Palestinian sports.

He famously said on Israel TV in January 2012 that he prefers the world to see young Palestinian men and women wearing shorts instead of being covered up or wearing the hijab. However, he was less liberal towards Israel, launching a large-scale campaign to suspend the country’s FIFA membership. He later surprised the Palestinian people and FIFA member states when he withdrew the suspension motion on 29 May 2015, the same day FIFA delegates were due to vote on it, in return for assurances that FIFA would form a committee to monitor Israeli violations against Palestinian sports.

Similarly, relations with Jordan were strained in June 2015, when Rajoub refused to vote for Jordan’s Prince Ali bin al-Hussein in FIFA’s presidential elections. His refusal prompted PA President Mahmoud Abbas to make a hurried visit to Amman to ease tensions.

Rajoub’s statements and positions have frequently got him in trouble. Among his most controversial was his description of Palestinian Christians as “the Merry Christmas group” that supports Hamas in any election. His comments were deemed offensive and he was forced to make a public apology.

Rajoub has also been open about his participation in Israeli meetings and conferences, including the conference held by the Institute for National Security Studies in April 2013. He argues that attending these events does not normalize the occupation, and stresses that it is important to convey the Palestinian viewpoint and position to Israel in order to reach a two-state solution.

He does not have a specific position regarding Hamas, and his views on the movement have tended to change depending on the post he held. In 1990s, when he served as head of the PSF, he was known for his fierce hostility toward Hamas. But after he became adviser to the Palestinian National Security Council, he adopted a more flexible position, even calling for the integration of the group into the PLO and the Palestinian political system in general. In recent years, he has maintained friendly contact with Ismail Haniyeh, leader of Hamas in the Gaza Strip. This is in addition to the constant communications on sports between Rajoub and Abd-al-Salam, Haniyeh’s son, who is a member of the Higher Council for Youth and of the Executive Office of the Palestinian Olympic Committee.

However, Rajoub’s shifting stance does not necessarily mean that he is in agreement with Hamas. He has vented his anger against the movement on several occasions, and has said that the PA will not allow Hamas to hijack the Gaza Strip either in the name of Islamism, resistance or the Muslim Brotherhood, out of which Hamas was founded. At the same time, Rajoub does not have permanent friends or permanent enemies. For example, he has a hostile relationship with senior Fatah leader Muhammad Dahlan. Rajoub has openly criticized him on several occasions, mainly because Rajoub wanted to discredit him as a successor to the 82-year-old Abbas.

Rajoub’s political and sports activities bore fruit at Fatah’s seventh congress in Ramallah in November 2016. During the congress, at which votes were cast for key positions in the party, Rajoub garnered the second highest number of votes after Marwan al-Barghouthi, who is currently imprisoned in Israel for deadly terror attacks carried out during the Second Intifada. Given the satisfactory results, Rajoub indirectly stated that he hopes to become Fatah’s vice chairman, saying, “Let us wait and see. It is not only about the post of vice chairman. Rather, it is about the need to make amendments to Fatah’s statute in order to keep abreast of the changes affecting the movement.”

Rajoub is well aware of the importance of becoming vice chairman, particularly given the rumours that have swirled about Abbas’s health. Fatah dominates Palestinian politics, whether in the PLO or the PA, which means that Rajoub has ambitions for the long run. He is an experienced politician and has good relations with Israel and the Arab states. He is also a military leader with a solid security record and enough charisma to control the Palestinian security services. That being said, any future Palestinian leader should be ‘a popular’ figure, and Rajoub is a controversial one. He has supporters and opponents. This makes his chances of succeeding Abbas good, but by no means guaranteed.