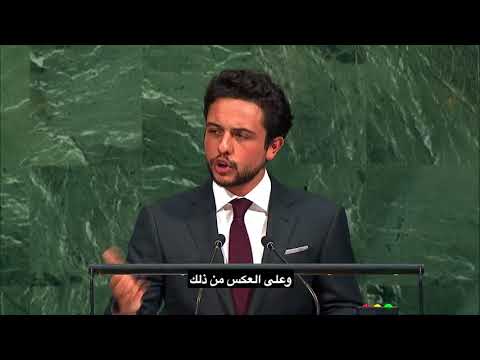 Prince Hussein bin Abdullah was named as first in line to the Jordanian throne aged just 15. Now 24, the son of King Abdullah II and Queen Rania has spent the intervening years completing his education and putting his increasingly firm stamp on the world.

He attracted the attention of royal fans in June 2018, when he invited Britain’s Prince William to watch a World Cup match during his Middle East tour. Dubbed ‘the world’s hottest bachelor’ by the British tabloids, the prince has more than his looks to help him prepare for his role as king.

Born in the Jordanian capital Amman on 28 June 1994, the prince is named after his grandfather, King Hussein bin Talal, who reigned from 1952 until his death in 1999. King Hussein was known to his people as ‘al-Malik al-Insan’ or ‘the Humane King’, for his efforts to improve the lives of Jordanians. Prince Hussein is a member of the Hashemite family, which has ruled Jordan since 1921 and claims descent from Prophet Muhammad through his daughter Fatima. He is the older brother of Princess Iman (21), Princess Salma (17) and Prince Hashem (13).

In May 2016, Prince Hussein graduated from the prestigious Georgetown University in Washington, DC, where he majored in international history. A year later he graduated from the Royal Military Academy Sandhurst in the United Kingdom.

His designation as crown prince was not a given. His father Abdullah was not expected to succeed to the throne despite being the eldest son, as the king transferred the title to his younger brother Prince Hassan in 1965. Shortly before his death, however, the king changed the order of succession, naming Abdullah as his heir.

Abdullah, in turn, first appointed his younger half-brother Prince Hamzah as his heir, but stripped him of this title in 2004 because he was seen as too young and inexperienced. Jordan’s constitution states that the monarch’s eldest son is automatically first in the line of succession to the Jordanian throne unless decreed otherwise.

Prince Hussein officially became heir apparent on 2 July 2009, when a royal decree naming him as crown prince was issued.

Since then, the prince has accompanied his father on official and military missions and taken on several official duties, including serving as regent during the king’s absence from the country.

He is in charge of the Crown Prince Foundation (CPF), which oversees a technical university and a number of scientific and humanitarian initiatives. For example, Haqiq is a four-step national leadership program for ninth and tenth graders, established to encourage youth volunteerism. The Masar initiative aims to inspire and support young people’s passion for innovation in space technology, which so far has resulted in the design of JY1-SAT, Jordan’s first satellite. Hearing Without Borders, meanwhile, aims to support the rehabilitation of Jordan’s hearing impaired and those suffering from hearing loss.

Upon the CPF’s launch in December 2015, Prince Hussein wrote a message saying, ‘Jordan’s youth are our source of health. […] Our youth are the leaders and champions of the future,’ underlining his focus on young people and helping them to achieve more.

Militarily, he trained with the Jordanian special forces elite 71st Counter Terrorism Battalion in 2013, and holds the rank of lieutenan in the Jordanian armed forces. Politically, he took a stand by visiting wounded people from Gaza being treated at the King Hussein Medical Center in Amman.

But perhaps his most notable achievement to date is becoming, at the age of 20, the youngest person to chair a United Nations Security Council during a session in December 2015. In response to the prince’s call to engage young people in peace building and countering violent extremism, the council adopted the Jordan-proposed Amman Youth Declaration.

The declaration was adopted in Jordan four months earlier with inputs from over 10,000 young peace builders at the first-ever Global Forum on Youth, Peace, and Security, outlining the need to leverage institutional support for youth-driven initiatives and programs.

After adoption of the resolution, the prince wrote on his Instagram account, ‘I would like to congratulate the world’s youth that contributed to drafting the “Amman Youth Declaration” which resulted today in the adoption of an historic and unprecedented resolution by the Security Council on Youth, Peace and Security. The…resolution marks a new era for engaging youth as partners in peace building and in countering violent extremism, as well as empowering them to be actively involved in the decision-making process.’

He followed this up in May 2017 by giving the welcoming speech during a session of the World Economic Forum, which was held on the Jordanian side of the Dead Sea, and in September 2017, when he represented Jordan at the UN General Assembly.

At the World Economic Forum, in front of over 1,100 politicians and business leaders from more than 50 countries, he again called for the empowerment of young people. “What Arab youth want is what youth everywhere want: A fair chance, a chance to be heard, a chance to make a difference. What is unique to Arab youth, though, is a yearning and thirst that I have not seen anywhere else. Perhaps that’s because our dire circumstances make us cling more tightly to hope.”

It is a message that will likely resonate across the region, where more than 28 per cent of the population is aged between 15 and 29, and youth unemployment is estimated to stand at over 20 percent.