Domestic Violence in North Africa: Do New Laws Offer a Glimmer of Hope?

Domestic violence is generally eschewed by laws and policies promoting gender equality in North Africa, mainly because these are blind to what occurs in the private sphere. Yet little progress can be made if the private is not ultimately rendered public.

Indeed, although the legal dimension constitutes only one element of the broader constellation of gender relations and institutions, it is a crucial and understudied one in North Africa. The region has witnessed deep social, economic and political transformations in the last four decades, and there is a need to reopen the debate on domestic violence in light of this new reality.

A look at the legal status of domestic violence in North Africa is telling. In Morocco, for example, Article 490 of the Penal Code criminalizes extramarital sex for women and sanctions jail time from one month to one year. However, these cases are rarely taken to court, since a conviction depends on either eyewitness testimony or a confession by one of the perpetrators. An unmarried woman’s pregnancy is proof of sexual relations and may lead to criminal prosecution, but her male partner’s culpability is not established by law. Although honour killings are extremely rare in Morocco, newspapers sometimes report the prosecutions of pregnant women who cannot identify the father of their child. Further, no laws specifically prohibit domestic violence, though general prohibitions against assault found within the Penal Code are theoretically applicable to such situations. Physical abuse is grounds for divorce, but the wife must be able to call on witnesses to support her claims (see Article 100 of the Moudawana or Family Code). If she is unable to prove her case, the authorities will return a woman to her abuser’s home, potentially leaving her in a worse situation than before she filed the complaint. Consequently, few women report domestic abuse.

Sexual assault and rape are both criminal offences, although spousal rape is not. The maximum sentence for each crime is five years in prison. Given the prevailing societal concepts of personal and family honour, victims of sexual violence rarely come forward for fear of shaming their families. Law 475, which allowed a rapist to marry his victim, was repealed but reporting rape is still taboo.

Domestic violence accounts for the majority – an average of 74 per cent – of violence committed against women in Morocco, according to a report on gender-based violence between September 2005 and October 2006 published by Anaruz, a national support network for women victims of violence. Other forms of violence covered by the report are institutional violence (8.8 per cent), violence outside marriage (6.8 per cent) and social violence, which includes physical and verbal abuse, assault and murder (14.4 per cent).

In Algeria, domestic violence is both a legal and a social problem. Around 7,400 women filed domestic violence complaints in 2009, 1,555 more than in 2004, according to the law enforcement agency that handles such cases. According to Belala, an Algerian researcher and blogger, “Violence against women is a pervasive problem in Algeria. It touches all social classes and all regions, except in the extreme south where the Tuaregs banish men who rape women.”

SOS Woman, an Algerian NGO set up around 15 years ago, was the first to publicly denounce domestic violence against women. According to the NGO, although domestic violence is increasing in Algeria, victims still fear scandal and so avoid taking cases to the police or court. “Victims talk to us anonymously on the phone. We get hundreds of calls from women who complain of being sodomized or forced to do things they are not morally comfortable with,” a spokesperson for the organization said.

Algerian law still allows a rapist to escape prosecution by marrying his victim, although a new law passed in 2016 defines sexual harassment and violence against women as a crime. Accordingly, if a domestic attack prevents a woman from working for more than 15 days, the perpetrator faces two to five years in jail. If a woman is mutilated, or the violence causes loss of eyesight or a limb, or any sort of permanent damage, the perpetrator could face from ten to 20 years in prison.

In Tunisia, a 2012 survey conducted by the National Office of Family and Population, found that one in five women are victims of domestic violence. This includes sexual violence, battery and other physical and psychological violence, such as threats and intimidation within the confines of marriage. For example, the survey included the case of a 49-year-old mother of six who had been married for 30 years and was subjected to physical, psychological and sexual violence over the course of the marriage. The woman filed a case against her husband in 1979. However, she had to withdraw it when he was arrested and held in custody for a week because she was dependent on him financially.. In 1998, her husband beat her when she refused to leave her job. The woman eventually left the family home and presented a medical certificate of her injuries to a judge. However, her husband filed for divorce on the grounds of spousal desertion, a step she was unable to take herself because his consent was needed for the divorce to take place.

The only Tunisian association to run a shelter for abused women is the Tunisian Association of Democratic Women (ATFD). According to a report on women victims of domestic violence, which the association published in 2001, most women who seek shelter in AFTD are beaten either by their husbands/partners or by a male member of their extended family. The main reasons that women do not report the violence is economic dependency and lack of self-esteem. As for the official stance on domestic violence, the Tunisian state prefers to leave it to the extended family to deal with.

Although Tunisia has some of the most progressive laws on women’s rights in the region, and a new constitution passed in 2014 ostensibly guarantees full gender equality, the ongoing upheaval following the 2011 revolution means that the country scores poorly when it comes to women’s safety.

On the legal front, domestic violence is dealt with in Article 218 of the Tunisian Penal Code. An amendment to this article was made in 1993, increasing the severity of the penalty for an assault committed by one spouse against another or assault by a parent of a child. Under the same article, the penalty for domestic violence is imprisonment for two years and a fine of 2,000 dinars. This can be increased to three years’ imprisonment and a fine of 3,000 dinars if the violence is premeditated. In situations where the victim decides to withdraw the case, the article stipulates that the proceedings, trial or enforcement of the penalty shall be discontinued.

In sum, while rape or sexual violence within marriage is in the course of being criminalized in the Moroccan legal system, Tunisian law does not explicitly prohibit it. Domestic violence is prohibited in Morocco, in accordance with the guidelines submitted by the United Nations Special Rapporteur on violence against women to the 52nd session of the United Nations Commission on Human Rights (U.N. doc. E/CN/.4/1996/53, Add.2). It must be noted, however, that in the three North African countries covered above, women’s NGOs endeavour to raise awareness about the issue of domestic violence through campaigns and assistance. Political will, adequate training for the police and judges, law enforcement and the punishment of domestic violence are still much needed.

A 2015 Amnesty International report on Egypt cited brutal physical and psychological violence against women. Beating, whipping, burning and forced seclusion were among the abuses reported by the women interviewed. The Egyptian Ministry of Health conducted its own survey on domestic violence, and half of the women interviewed reported that they had experienced some form of domestic violence. Women’s rights movements blame ingrained prejudices and discriminatory laws for gender-based domestic violence. Police contempt and a biased justice system discourage women from reporting incidents of violence.

In Libya, the ongoing civil war is conducive to violence against women. Women are known to pay a particularly high price in both the private and public sphere in times of war. Domestic violence is part and parcel of the everyday life of Libyans caught in the conflict. 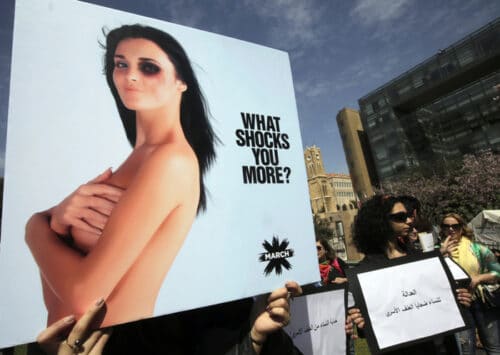 In North Africa, A Lot Remains to be Done to Protect Women from Domestic Violence
In Morocco, bill imposes tougher penalties on perpetrators of various types of violence committed both in the private an... 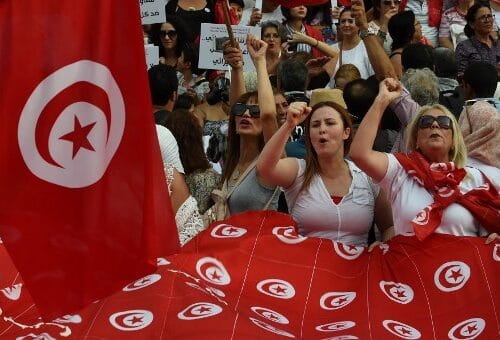 In Tunisia, New Generation of Women’s Initiatives Reshaping Feminism
Feminism in the 21st century has morphed into a multifaceted battle. Tunisian LGBTQ+ activists are engaged in a threefol...