What started with a media outcry over the waving of a rainbow flag during a concert in Cairo on 22 September 2017 has escalated into a crackdown on Egypt’s LGBT community and the arrest of 16 men on ‘debauchery’ charges.

The 16 alleged homosexuals were sentenced to three years in prison in late November 2017 but were subsequently released on bail pending their appeal.

They are the latest in a string of arrests on charges ranging from ‘the habitual practice of debauchery’ to ‘promoting sexual deviancy’ since the concert by the Lebanese band Mashrou’ Leila. The lead singer of the band, Hamed Sinno, is openly gay and a rainbow flag, associated with LGBT rights, was briefly raised during the event.

Media picked up images of the flag and quickly dubbed the concert ‘the gay party’. Multiple commentators spoke of a Western conspiracy to spread homosexuality, which is seen as an exclusively Western phenomenon and damaging to Egyptian values.

In a popular talk show, a spokesperson for the Music Syndicate, a body representing the musical professions, described the spread of homosexuality as a bigger threat than Islamic State. In another TV programme, the presenter kicked out one of his guests for defending the flag wavers.

“The whole society is homophobic,” a member of Egypt’s LGBT community told Fanack Chronicle on condition of anonymity.

According to the Egyptian Initiative for Personal Rights (EIPR), since 2013 the police have ‘escalated a targeted crackdown on people whose sexualities or sexual practices, actual or perceived, differ from those considered normative in Egyptian society’.

‘The average number of persons arrested and referred to trial in these cases has increased five-fold since the last quarter of 2013, in comparison with previous years,’ the EIPR stated in a report published on 22 November 2017. A total of 232 people have been arrested between September 2013 and April 2017.

The report details various strategies used by the Ministry of Interior’s General Directorate for Protecting Public Morality to make arrests.

The first is the use of dating sites and apps to entrap LGBT people or those perceived as such. The LGBT interviewee stopped using data apps for a while in the wake of the concert and is now extra cautious. “You are more careful about who you are talking too, and who you are meeting,” he said. “And you’re worried about your friends in the community.”

The second strategy the EIPR identified is the deportation of foreigners who are perceived to be gay; the third is ‘the creation of major sex scandals that receive exceptional media attention’.

In 2014, for example, police raided a bathhouse in Cairo where gays allegedly gathered, accompanied by television presenter Mona al-Iraqi and her film crew, in what has become known as the ‘Ramses bathhouse case’. Dozens were arrested, although all the defendants were eventually acquitted.

In Egypt’s deeply religious and conservative society, homosexuality is widely regarded as a sin. According to the Pew Research Center, 95 per cent of Egyptians reject homosexuality.

Asser Ammar, an Egyptian engineer in his early 40s, supports the police campaign. “I don’t like such ideas, ideologies and lifestyles to be spread and [become] normal in Egypt,” he told Fanack Chronicle, adding that spreading homosexuality “would normalize the acceptance of these ideas [that are] against religious principles and community values, which will negatively affect the new generations”.

Sensationalist media coverage of gay ‘scandals’ has served to fuel anti-gay sentiment, which the police are using to their benefit. “They capitalize on the social rejection [of homosexuality],” Dalia Abdel Hameed, the head of EIPR’s gender programme, told Fanack Chronicle. “There is a hegemonic kind of morality [in Egypt].”

The police benefit in another way as well, the LGBT interviewee said. “Arresting homosexuals is a way for the police to boost their reputation. It’s good publicity, it shows them to be more masculine.”

In the bathhouse case, people felt to a certain extent that the police invaded the privacy of the bathers, who were after all supposed to be naked, which led to criticism of the police and TV presenter al-Iraqi in particular. The act of raising the rainbow flag, on the other hand, was considered “not private” and a “declaration of identity”, Abdel Hameed explained, and led to a more “effective media outcry”.

According to the LGBT interviewee, the recent wave of arrests could be interpreted as a window of opportunity. “[The LGBT crackdown] is a wild card to play whenever [the government] needs to draw public attention away from big problems, such as the high inflation and security failure,” he said, referring to recent terrorist attacks.

Abdel Hameed agreed. “The strategy involves distracting attention from other crises.” She sees similar patterns in other cases that involve public morality, such as the recent arrest of a singer over a sexually explicit video clip, and the sentencing of a TV presenter who discussed single motherhood on her show. “We are noticing that [the state] uses these kind of public morality cases as if they are big and important,” Abdel Hameed said.

Sentences handed down in these cases are often related to debauchery, public indecency or prostitution, as Egyptian law does not explicitly criminalize homosexuality.

This may soon change. In the wake of the flag-waving incident, 67 MPs proposed a draft bill to outlaw same-sex relationships, promoting homosexuality, promoting or advertising LGBT gatherings and displaying, promoting, selling or producing LGBT symbols.

‘If passed, this law would further entrench stigma and abuse against people based on their perceived sexual orientation,’ Amnesty International said in a statement.

Although the LGBT interviewee believes that many of those recently arrested will be released once the media attention has died down, he is not optimistic about the future. “Looking at the world, everywhere countries are moving towards, or at least attempting to move towards, more equality and equity for minorities. Here, it is going backwards.”

However, he said he can find some solace in recent events. “At least things are moving, and when they move backwards, we have a higher chance of getting asylum abroad.” 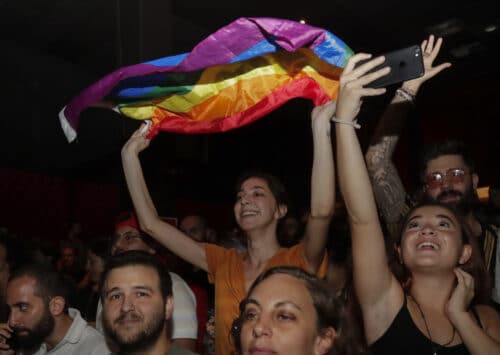 Rainbow Flag at Concert Infuriates Egyptians, Sparks Calls for Gay Clampdown
The extremely rare public display of support for gay rights was followed by calls in the media for the government and re...