The Issue of Homosexuality Is Changing Moroccan Society

Long considered a taboo in Morocco, homosexuality is increasingly being brought into the open. A number of activists and academics are addressing it from various perspectives, although not everyone is in favour of debating it publicly.

Article 489 of the Moroccan Penal Code states that ‘unlawful or unnatural acts with an individual of the same sex’ constitute a crime. Punishment varies from six months to three years in prison and a fine of 120 to 1,200 dirhams ($13-130).

However, civil society is increasingly stepping in to defend the rights of homosexuals. On 1 June 2004, the Moroccan police arrested 43 people in the city of Tetouan and used Article 489 to charge them with ‘engaging in homosexual activity’. In response, Morocco’s gay community launched an international online campaign demanding their release. Thousands of letters were sent to Western media and foreign embassies in Morocco. In order to coordinate their activities, Kif-Kif (literally ‘same’ or ‘similar’ in Moroccan Arabic) was established in 2005, initially as an online forum for LGBT Moroccans. In early 2006, Kif-Kif volunteers began fighting to be legally recognized as an association fighting for the rights of homosexuals in Morocco. Unable to do so, the organization was registered in Spain in 2008.

Since 2008, Kif-Kif has established several support groups outside Morocco, working alongside local LGBT organizations. In April 2010, it launched Mithly (the name is a play on words, mithly meaning both ‘homosexual’ and ‘like me’) as the first Moroccan LGBT magazine. Two hundred copies of the first issue, which appears in print and online, was distributed clandestinely.

In May 2010, Kif-Kif activists created Menna w Fena (‘of us and for us’), a subgroup for lesbian, bisexual and transsexual women that aims to protect these women in Morocco and help them to assert themselves within the LGBT community.

On 10 December 2007, the court in Ksar el-Kebir, a small town 120 kilometres south of Tangier, fined six men for violating Article 489. According to the defendants’ lawyers, however, the prosecution could not produce any evidence of illegal conduct.

A week later, the men were arrested, after a video appeared online allegedly showing them at a private party. Media reports claimed it was a same-sex wedding. Following the arrests, hundreds of men and women demonstrated in the streets of Ksar el-Kebir, denouncing their alleged actions and demanding they be punished.

On 14 May 2014, a court in Fqih Bensalah, in central Morocco, sentenced six people to up to three years in prison. They were arrested following a complaint lodged by the father of one of them. He accused the other five of ‘inciting’ his son ‘to behave deviantly’. Under international pressure, the men’s sentences were reduced and they were immediately released so that they could be ‘treated’ because ‘they were victims of society’.

On 18 September 2014, while standing at a bus stop with a Moroccan man he had met online, Ray Cole, a 69-year-old Briton, was arrested by the police. Using the images on both the men’s phones as evidence, the police charged them with ‘the crime of homosexuality’. Neither the British consulate nor Cole’s family was notified of his arrest until 4 October 2014, when he was able to use another prisoner’s mobile phone to ring home. The media and British MPs were mobilized and Cole, who was serving a four-month sentence after an unfair trial, was released on 7 October 2014, and allowed to return to the UK pending an appeal. The Moroccan man, he was with, has still not been freed, despite an ongoing campaign.

In March 2016, a homophobic attack in the city of Beni Mellal shocked the country. A video circulated on social media showed two naked men, their faces swollen and bleeding, being brutally beaten by a group of young people in their own apartment. The victims were imprisoned for being homosexuals, before finally released 26 days later. Two of the attackers were also sentenced to four and six months in prison, while two others were released.

On 27 October 2016, two girls aged 16 and 17 were arrested for kissing at a house in the Hay Mohammadi district of Marrakech, according to Tel Quel magazine. Their families had called the police. The two girls were taken to Boulamharaz, an adult prison, instead of a juvenile detention centre.

Despite what appears to be an ongoing campaign against Morocco’s LGBT community by the security forces and judiciary, broadly speaking, two camps have emerged in the debate over how to view and discuss homosexuality. Those who accept homosexuality generally call for universal human rights to be upheld; those who reject homosexuality regard it as a threat to Moroccan society. Between these two camps, the Moroccan state is faced with the challenge of meeting its obligations to the international community while preserving the shared values that ensure social cohesion among its citizens.

Yet at the same time that Moroccan society is changing, in part as a result of the emergence of digital and social media and the impact this has had on connecting groups, including minorities, around the world, being openly gay in the country is an option for very few. In Melilla, a Spanish enclave in Morocco that has become a gateway for refugees trying to reach Europe, homosexuals are demanding political asylum because, they say, they are oppressed at home. According to Said Bennis, Professor of Sociology at the University of Rabat, some Moroccans may be using homosexuality as a pretext to obtain political asylum. This is why politicians, academics and civil society actors need to promote an open debate about homosexuality and help to break the taboos surrounding it that are driving people abroad.

Homosexuality in the Middle East and North Africa: A Grim Situation with Rays of Hope
Are the Arab world and homosexuality incompatible? One might think so, given the news about anti-gay sentiment, raids on... 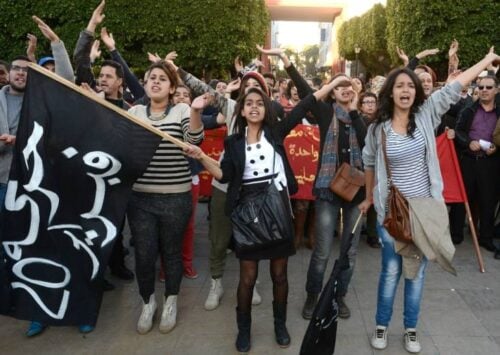 In Morocco, Proposed Reforms Intensify Debate to Repeal ‘Bedroom Laws’
Among the recommendations is the decriminalization of sex outside of marriage, which civil society has demanded for some...