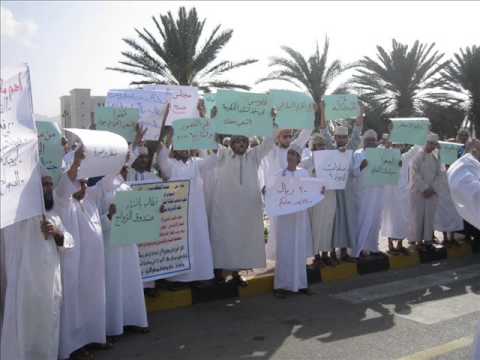 The regime of Sultan Qaboos bin Said has increasingly cracked down on dissent since protests erupted in Oman in January 2011. Unlike other uprisings in the region, most protestors were demanding more political freedoms and an improved economy, rather than the overthrow of the ruler.

Those still pushing for more freedoms are being met with repression. In January 2017, the prominent human rights defender Saeed Jadad was heading to Doha, Qatar, when he was stopped at the airport and informed that he was banned from travelling until 2099.

Jadad has long documented human rights violations in Oman and previously wrote columns critical of the regime. He also organized protests and urged the government to expand its consultative assembly in 2011, putting him on the regime’s radar.

On the same day he was prohibited from travelling, the minister for information also extended the closure of Azamn newspaper for three more months, overruling a previous court decision that permitted the paper to begin publishing again.

The decree was the first in a series of attacks on press freedom that year. On 3 May 2017, the Gulf Center for Human Rights (GCHR) reported that Oman’s Internal Security Services (ISS) had blocked the website of Mowaten magazine. The family of the editor-in-chief and founder of the publication, Mohammad al-Fazari, who now resides in the UK, was then prohibited from leaving the country the following February.

The next month, two critical books were banned from appearing at a book fair in the capital Muscat. The first was a compilation of articles published by Mowaten and the other an anthology by the Omani poet Ahmed al-Raimi titled To You No Loyalty.

The Omani Centre for Human Rights (OCHR) added that many artists did not even showcase their work, fearing that their stories could stir controversy.

‘OCHR-Oman deplores this unexplained and unacceptable attack against writers and authors in Oman and demands the security authority take its hands off the literary activities and protect writers’ rights,’ the group said in a statement.

Despite pleas for justice, authorities continued to show little regard for human rights. In April 2018, activist and former diplomat Hassan al-Basham died in prison after he was denied medical care. The 52-year-old was jailed in November 2017 after his appeal was rejected. He was first arrested in 2015 and then convicted a year later for inciting hatred over the internet and insulting the sultan.

The following May, the writer Mansour bin Nasser al-Mahrazi was sentenced to three years in prison for a book he published in 2016 titled Oman in the Square of Corruption. Mahrazi was sentenced even though he removed the book from the market. He was granted bail the same day but lives in fear of ever criticizing the authorities again.

Six months later, the Omani Human Rights Association and the GCHR received reports that Sultan al-Maktoumi was one of two activists detained leading up to Israeli Prime Minister Benjamin Netanyahu’s visit to Oman on 27 October 2018. Al-Maktoumi was reportedly summoned by the Special Division of Sohar Police Headquarters, where he was then apprehended and held for several days.

Both rights groups believe that al-Maktoumi was silenced to stop him from publicly condemning normalization between Israel and Oman, which most citizens in the Arab world reject unless there is a just solution to the Palestinian question.

However, the crackdown on dissent has not stopped some pro-Palestinian Omani activists from speaking to the international press. A few even told Middle East Eye (MEE) that Sultan Qaboos may have broken Omani law by hosting Netanyahu. The Law of Boycotting Israel was created in 1972 by the sultan himself and prohibits any commercial or financial deals with the country.

“Since 1977, official records stopped mentioning the Law of Boycotting Israel,” one activist told MEE. “This happened when the country took a neutral policy in foreign affairs.”

“There is no clear path of how to implement the law. But even discussing this topic is risky because there is no political speech,” added another activist, declining to be identified.

The case of al-Maktoumi, who was eventually released on 8 November 2018, a day before the ISS summoned online activist Uday al-Omeiri for questioning, reveals just how risky it is to criticize the sultan. Al-Omeiri was reportedly asked about his social media posts, which denounced the sultan’s decision to invite Netanyahu to Oman.

With no news of al-Omeiri’s fate since, rights groups fear that he is languishing in prison where torture and ill treatment are rife.

A report by Melanie Gingell, a GCHR board member, describes in depth how human rights defenders are routinely beaten, placed in solitary confinement and forced to endure extreme temperatures and humiliation. Gingell said that activists were scared to speak to monitoring groups due to the risk of reprisal but bravely did so anyway.

‘Torture is commonplace in places of detention,” Gingell wrote in the report. ‘It is applied as a matter of course to those held as a result of being involved in campaigning for social reform since 2011.’

Other tactics used to punish activists include spreading rumours to tarnish their reputation, which prevents them from finding a decent job once they are released from prison. Families are also pressured to persuade relatives to stop criticizing the state. In other cases, activists are simply told that they must leave Oman and never return.