Human Rights Watch (HRW) has routinely criticized the UAE government for widespread abuse of the country’s many labourers and domestic workers, who are mostly from South and South-East Asia. For example, between March 2007 and September 2009, the UAE was named in three special reports detailing several kinds of human-rights violations, including the deportation of HIV-positive migrants (23 September 2009), abuse of Sri Lankan domestic workers (14 November 2007), and exploitation of construction workers (11 January 2007).

Most of the human-rights violations in the UAE involve the large population of Asian migrant workers, mostly from India, Pakistan and Bangladesh, who suffer, at the hands of their employers and employment agencies, abuses including confiscation of their passports, non-payment of wages, and deplorable working and housing conditions that can be inhumane and resemble slavery.

One of HRW’s recent interventions involved working conditions on the Saadiyat Island project in Abu Dhabi. According to HRW, thousands of South Asian migrant workers building the USD 27 billion island development ‘faced severe exploitation and abuse, in some cases amounting to forced labour’. The group blamed labour-supply agencies, construction companies, and repressive laws for the abuses.

The report acknowledged the UAE government’s recent efforts to improve housing conditions and ensure the timely payment of wages for workers, but it also asserted that labour abuses were still common. International institutions planning to open branches on the island – including the Guggenheim Museum, New York University (NYU), and the French Museum Agency (responsible for the Louvre Abu Dhabi) – were urged to use their influence to help stop the abuses by obtaining enforceable contractual guarantees that construction companies will protect workers’ fundamental rights on their projects. 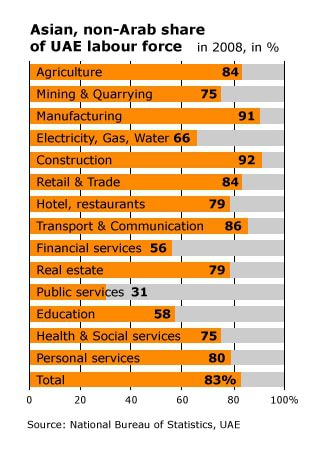 The UAE Constitution provides for equality for citizens without regard to race, nationality, or social status, and the law prohibits discrimination based on disability, but the Constitution does not provide for equality for non-citizens (including Bedouns). Job discrimination, in employment and pay, on the basis of ethnic or national origin is common and appears to be sanctioned by law. Many job openings are advertised in local newspapers, and relevant websites clearly declare their ethnic or national preference and/or exclusions.

Another aspect of this discrimination is the great difference in salaries and wages paid to employees from different backgrounds, regardless of their similar skills, education, and qualifications. The groups that tend to receive the highest salaries are Emirati nationals, followed by Westerners (Europeans, North Americans, Australians, and New Zealanders), nationals of developed Asian countries (especially Japanese and South Koreans), South and Central Americans, Arabs, Africans, Asians, and South and South-East Asians.

Emiratis also benefit greatly from government subsidies and the programme of Emiratization, a government initiative to gradually replace the expatriate workforce with local human resources by several means, including forcing companies to hire a certain quota of UAE citizens.