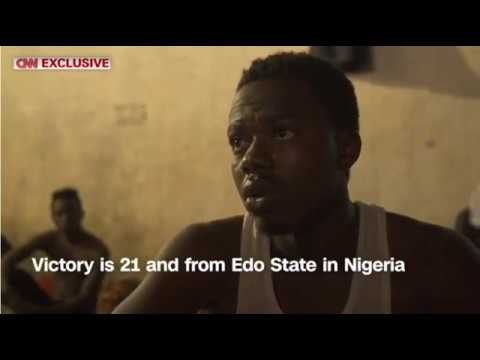 European governments have been implicated in revelations of a slave trade and other abuses targeting migrants in war-torn Libya, due to Europe’s collaboration with Libya’s coast guard to stop the flow of migrants crossing the Mediterranean.

A CNN investigation uncovered slave auctions where migrants were being sold into servitude for the equivalent of $400. Tens of thousands of refugees and economic migrants from elsewhere in Africa cross into Libya each year, hoping to make the journey from there to Europe in smuggler boats.

‘But a recent clampdown by the Libyan coast guard means fewer boats are making it out to sea, leaving the smugglers with a backlog of would-be passengers on their hands. So the smugglers become masters, the migrants and refugees become slaves,’ the investigation, published in November 2017, found.

The International Organization for Migration (IOM) previously documented similar findings. A Senegalese migrant who arrived in Sabha in south-western Libya told IOM that he was sold at a slave market there and brought to a private home where about 100 migrants were held hostage while kidnappers tried to extort money from their families to release them, sometimes beating them while on the phone “so that their family members could hear them being tortured”. Migrants who could not pay were sometimes killed, he said, while women were sold into sexual slavery.

Apart from those sold into slavery, many migrants who are apprehended while trying to leave Libya are held in inhumane conditions in detention centres. An Amnesty International report accused European governments of being ‘knowingly complicit in the torture and abuse of tens of thousands of refugees and migrants detained by Libyan immigration authorities in appalling conditions’.

“Hundreds of thousands of refugees and migrants trapped in Libya are at the mercy of Libyan authorities, militias, armed groups and smugglers often working seamlessly together for financial gain. Tens of thousands are kept indefinitely in overcrowded detention centres where they are subjected to systematic abuse,” said John Dalhuisen, Amnesty International’s Europe director, in a statement. “European governments have not just been fully aware of these abuses; by actively supporting the Libyan authorities in stopping sea crossings and containing people in Libya, they are complicit in these abuses.”

Yet the reduction comes at a price, as tens of thousands of migrants are warehoused in Libya by the Department for Combatting Illegal Migration, which runs detention centres in which as many as 20,000 captured migrants are housed. In some cases, the Amnesty International report said, migrants in these centres are tortured to extort money from them. Those who can pay are released, and sometimes are then helped to leave the country. The report alleges collusion between the coast guard and smuggling networks.

The coast guard was also implicated in a November 2017 incident in which up to 50 migrants drowned. A Libyan crew in a boat provided by Italy came across a sinking vessel full of migrants and not only failed to deploy its own inflatable vessel to rescue them but threw objects at rescuers from an NGO boat that attempted to come to the migrants’ aid, according to the Amnesty report.

Jeff Crisp, a former senior official with UNHCR, the UN refugee agency, and a researcher at Oxford’s Refugee Studies Centre, told Fanack Chronicle, “Italy and the EU have been directly responsible for the imprisonment and exploitation of refugees and migrants in Libya; first, by paying the country’s coast guard and militia groups to intercept and capture people who are trying to escape by boat, and second, by making it increasingly difficult for NGO search-and-rescue organizations to operate in the Mediterranean. This approach clearly violates international law and cynically allows Libya to take the blame for the slavery and other human rights abuses that have taken place in the country’s infamous detention centres.”

Crisp and others have called for Europe to create more safe and legal pathways for resettlement of migrants and refugees rather than containing them in Libya. Amnesty International also called for this in its report on the abuses of migrants, arguing, ‘It is essential that the aims and nature of this cooperation be rethought; that the focus shift from preventing arrivals in Europe to protecting the rights of refugees and migrants.’

In the wake of the revelations of the slave trade, EU officials announced plans to team up with the African Union in a joint task force of police and intelligence agencies targeting human trafficking. They also began evacuating migrants from the detention camps in Libya and repatriating those willing to return to their countries. EU President Donald Tusk called the reports of slavery and other abuses of migrants “horrifying” but stopped short of conceding Europe’s culpability, saying, “The worst we can do is to start the blame game. What we need now are common solutions and stronger cooperation to save lives, protect people and allow them to live in dignity. Our common duty is to step up the fight against these unscrupulous criminals and bring them to justice.”

Libya has no functional central government; two rival governments as well as militias aligned with the different government factions are competing for power. The militias have also become involved in the smuggling business. For instance, in September 2017, fighting broke out in the coastal city of Sabratha between rival militias, one of which was smuggling migrants and the other which was trying to intercept the smuggler boats.